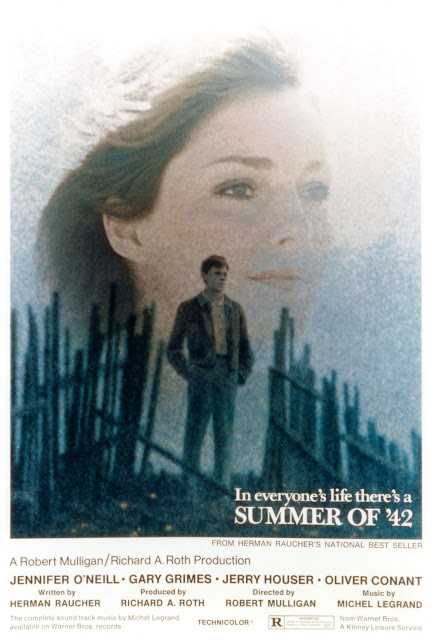 Ha ha, Burl here, still playing summer catch-up! (No, not Summer Catch, a movie I resent more every time I think about it! Ha ha, whatever score I gave that thing, it wasn’t low enough!) What I mean by that is I’ve got a summer movie to review for you, one that I watched in bits and pieces over the whole of this now-past summer! That’s not a way I usually watch movies, but in this case, for a picture that fits into the summerlong subgenre as neatly as this one does (ha ha, it’s even in the title!), it seemed not inappropriate! ("Summerlong" movies are ones that take place over an entire summer, in case you were wondering!)
The picture in question is Summer of ’42, a middlebrow drama from longer ago now than the period it was dramatizing was long ago from the movie’s release date, if you follow me! And I’ll give Summer of ’42 this accolade right off the hop: it absolutely nails the period details, at least as near as I can tell, since I wasn’t around back then! To ol’ Burl, it feels unquestionably authentic!
And here is another back-pat I’d like to hand the movie: This is without a doubt one of the great beach-town pictures I’ve seen, with more windswept dunes, scrub growth, crashing waves and half-buried fences than may be found in any number of other films in which such entities might reasonably be expected! Ha ha, why, it gives Jaws a run for its money in those departments, and that’s saying something!
With all that presented, I’ll get to the meat of the matter! Summer of ’42, as written by Herman Raucher, tells the clearly autobiographical story of Hermie, a New York lad vacationing in those wartime days on Nantucket Island! (They don’t call it Nantucket Island in the film, but that’s where the real story apparently happened, ha ha, though the movie was filmed in California, and looks it!) Hermie has a couple of pals, Oscy and Benji, and this diminutive-suffixed trio spend their days and evenings sweating in the grip of adolescent hormones, walking funny as a result, and along the way providing a pretty fair template for the Lemon Popsicle gang and their ilk! When push comes to shove, Benji can’t hack it and simply disappears; the important business of purchasing prophylactics and squiring girls to the movies (they go see Now, Voyager, I believe!), and thence to nighttime beach blankets, is left to Hermie and Oscy!
Oscy scores, but Hermie messes up, because his mind is fixed on the pretty young bride who lives in the fantastic beach house down the road! Ha ha, he acts like a real schmuck around her, and that’s no lie! She seems a bit like a Stepford Wife prototype given early retirement, but is friendly enough, and Hermie progresses from carrying her groceries to hauling boxes up a ladder to arriving one night when she’s just learned her husband, fighting in Europe, has fallen in battle; has become terribly d*unk; and is willing to self-hypnotize herself into deflowering Hermie! Ha ha, and Hermie never says a word after that, as far as we know, not even to his good pal Oscy! (He was saving it for the screenplay he would later write, I guess! Ha ha!)
Ha ha, I’ve liked a couple of Robert Mulligan pictures, like To Kill A Mockingbird and The Other, but despite a nice slowbones camera style, this one is a bit of a pettipoint! Of course it’s got a plinking-piano score from Michel Legrand; this was surely ordained! And let me tell you, they must have had the fog filters at level four for every shot in the picture! Robert Surtees, the cinematographer, was a pretty talented guy, but this measure of gauziness seems a bit much! Well, I guess it and all the rest of the syrup worked, ha ha, for it attracted audiences like flies! Oh, it was a mighty big hit!
But why? Several scenes, the condom-buying scene in particular, run on well past any reasonable length! It’s not that they’re boring or slow, but more a case of diminishing returns! Hermie travels beyond the realm of nervous juvenile here: he becomes a shaking, sweating, stammering wreck barely able to compose a sentence or stand upright, and a little of this goes a long way! I guess it’s interesting to see a yearning, lyrical account of behavior the older lady would be arrested and shamed for today, but really, the movie isn’t even as daring as it thought itself in 1971, I don’t think! And why the R rating? Ha ha, I sure can't figure it!
Jennifer “Scanners” O’Neill, who plays the lady, is as mentioned a bit robotic, but the kids are all good actors (though I think Benjie was really only playing himself!), as are the few adults in the picture, and I liked that we never saw Hermie’s parents, or anyone else’s parents for that matter! I wasn’t doing the movie much justice by watching it in chunks, I will admit, but nevertheless I can’t bring myself to award Summer of ’42 any more than one and a half strawberry cones with, uh, sprinkles!
Posted by Burl at 22:29