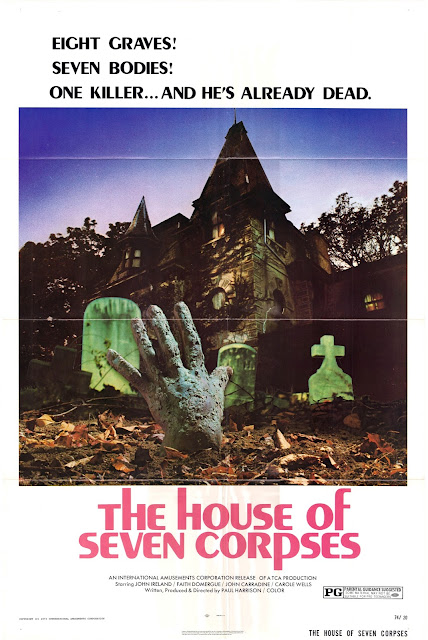 At a very slow shamble, it’s Burl, looming out of the darkness! I’ve got a zombie picture to tell you about, but it’s not just any zombie picture! It’s a one-zombie movie, and I’ve always kind of liked those, because, as in that first segment of Creepshow, it indicates a zombie with purpose and direction! The purpose is always revenge, the direction is toward one terrified victim or another, and the speed is always slow-w-w!
So it is with The House of Seven Corpses, a moldy oldie with more old than mold! Ha ha, it’s your basic early-to-mid 70s PG-rated low-budget horror picture, colourful, a little tempera-paint gore, filled with yelling and desperately lacking pep! But it has a cast you want to watch, let me tell you! John Ireland from Gunslinger and Satan’s Cheerleaders plays a highly irritable film director, who, without ever really ceasing to yell, or at least bark, or at his very nicest merely sneer with bitter sarcasm, is attempting to make a lttle horror picture absolutely filled to the brim with mumbo-jumbo and hocus-pocus!
Eric is this director’s name, and his (mature) star is none other than Faith Domergue from It Came From Beneath the Sea! They’re all shooting a horror movie in a big Utah mansion caretaken by John Carradine, well-known from The Boogey Man and Sunset Cove and The Sentinel and a thousand other pictures! (Though, amazingly, not Without Warning!) The house once belonged to the Beals, evidently a kill-crazy family who were so busy murdering one another that one wonders how they ever got around to procreating! Ha ha!
The principal from Three O’ Clock High is the mature male lead in the movie-within-a-movie, and from all the film-business sniping with which the first hour is well-supplied, it’s clear they were going for a kind of All About Eve cutting showbiz badinage thing! It doesn’t quite make it, I’m afraid, and this stretch gets a bit tiresome! Eric yells at people, a bearded crew member seems to be doing every job on the set, Carradine shakes his head a lot and finally a zombie pops up out of the ground and begins killing everyone! Ha ha, took a while, fellows!
Of course it begins with the same sort of obvious fake-out as F/X and every other movie about movies, but it tries to end with a twist too! Ha ha, I think! Actually I’m not sure what was going on – were the zombie and the chip-cheery blonde guy really one and the same? Was there some sort of transference, or was it merely as case of possession? Sorry, I’m not sure if that’s giving away the ending or not, because I don’t know if I’m completely making up that ending!
For a movie like this, it doesn’t actually matter! What does matter are the incidentals, like the for-once reasonable amount of Carradine we get! Ha ha, John Carradine is an actor I always enjoy watching, and he has a fair amount to do here! He even gets a pretty stiff neck twist given him by the zombie! There are a few eerie moments here and there, a couple of entertaining moviemaking in-jokes, and a whaleload of silliness! I wish it had more pep and more atmosphere, and maybe a little less yelling; perhaps the thing to do is pair it with something like The House on Skull Mountain, which might make it come off better, ha ha! In the end I can’t in good conscience give The House of Seven Corpses seven corpses, but I can present it with at least a corpse and a half!
Posted by Burl at 10:25