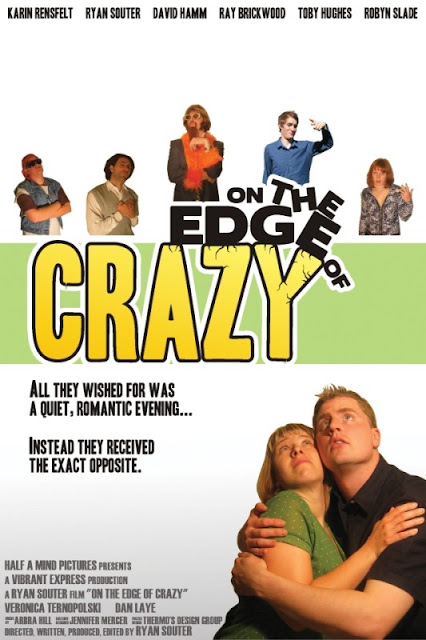 Hi, Burl here to review a movie I’ll characterize as “not very well-known!” It’s a romantic comedy shot almost a decade ago in a small town somewhere, and it’s called On the Edge of Crazy! Ha ha, and how did it fall into ol’ Burl’s hands? It’s too long a tale to tell! But you can watch it tonight if you wish, for it is available on the Internet!
The picture’s tagline truly says it all! Indeed, all they wished for was a quiet romantic evening, and double indeed, instead all they received was the exact opposite! Ha ha, the picture tells the story of a doughy fellow named Leland Leonard who has trouble in the dating department! His mushmouthed narration brings us to the present moment: he has thus far in his young life dated only weirdos and harpies, and hopes to someday find a normal lady he can love! He meets a cheery young lass called Beverly, and eventually manages to make a date with her! But their evening falls into chaos as Leonard’s brother, a would-be wrestler; and a beret-wearing individual, ostensibly a pornoo-movie director, with an unplaceable, ever-shifting accent; and a particularly unpleasant ex-girlfriend; and other such parties, invade their townhouse and make romance impossible!
Thus does the plot, or “plot,” unfold! Ha ha, I guess the atmosphere being striven for is the one-thing-after-another chaos of After Hours or other such pictures, but the situations are a bit too contrived for that to be brought off; and the humour alternately ham-handed or obvious! Some of the gags do come off well though, and when that’s the case it almost always arises from the more felicitous performances!
This is an amateur production, so I’m not going to complain too much about performance issues, ha ha! But it must be said that the director, Ryan Souter, probably would have been better off casting someone other than himself in the lead! He makes a game effort, but can overcome neither his physical unsuitability for the character, nor the essential passivity of his role, nor the fact that his mind was obviously more on his directing than his acting! On the other hand, the fellow who plays his hen-pecked buddy is really quite good, and a number of the other performances give some nice moments!
But the direction upon which Mr. Souter was lavishing the bulk of his attentions is pretty uninspired, I must say! Certainly I understand his position: keeping control of such an enterprise is, or in the moment at least feels like, a feat in itself! But the movie is bereft of any style or interesting flourish that might give it some individuality! It’s too bad, because with a little more pep and gumption, this might have stood out a little bit!
It tries to be weird, but the weirdness is mostly of the off-putting variety; and the picture is laid over with an outdated, juvenile men-are-from-Mars-women-are-from-Venus sensibility! Actually, even worse, the men are from Earth, supposedly, while the women are from Beta Centauri or some such far-flung alien place! Ha ha! It’s trying to be When Harry Met Sally, but comes off more as When Harry Met Bzwai-9!
There’s not too much more to say about such a picture! I myself watched it on DVD, but as I say, it appears to be available for viewing online if you’re so inclined! And by all means, if you have a taste for backyard comedy or the sincere efforts of amateurs, you might find some genuine enjoyment! I will say that I appreciated it a great deal more than many slick and professional rom-coms I’ve seen! I’m going to give On the Edge of Crazy a robust one and a half wrestling capes!
Posted by Burl at 10:04