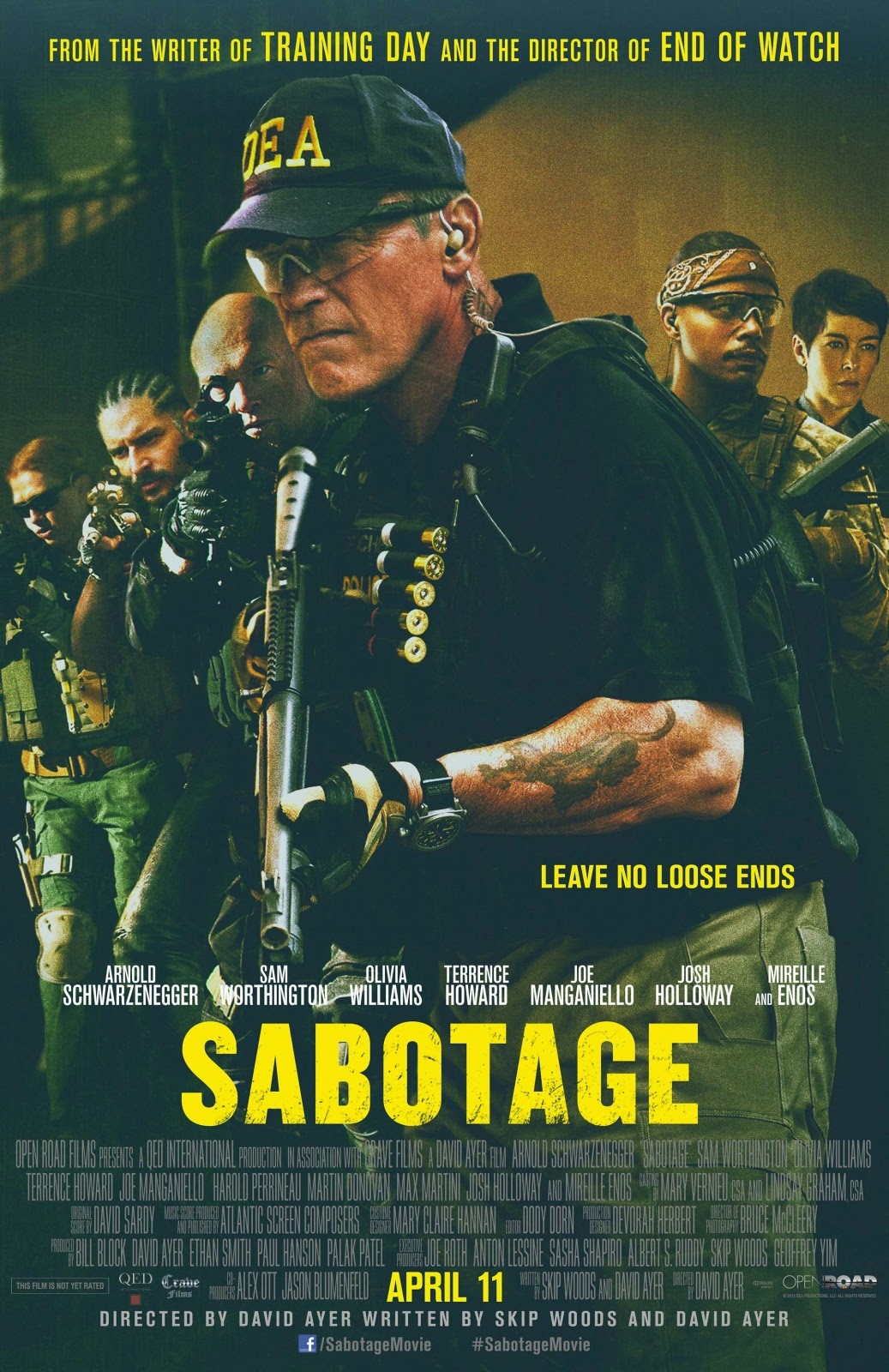 Hi, and a big ha ha to you today! You know, occasionally I think to myself “Hey! The old Schwarz is making movies again, ha ha! I should check them out!” This is the same impulse that led me to watch The Last Stand some time ago, and more recently I viewed another neo-Arnie picture, Sabotage!
Well, you’re certainly asking “Ha ha, Burl, does Arnie recapture his glory days in this picture, the crazy, hazy days of Commando and Total Recall?” Answer’s no! He’s trying here for extreme grit and bottle-green heartache, for pain and murderous obsession, and to get within the mind of a man whose family was kidnapped, tortured and killed by Mexican drugsmen! Perhaps if the movie wasn’t so fixated on its cast of meatheads and their terrible grooming habits, it might have worked as a tragic character study, or else a violent mystery, but it doesn’t! Really you just wait for these characters to meet their makers, moments which, in several cases, can’t come soon enough!
Arnie runs a team of hard case DEA police clods who, in the opening scene, geniuses that they are, bust in to a drugs-den and steal many dollars! This scene, like several others in the picture, involves the team making their way down hallways and around corners, shooting people and then shouting “Clear!” Ha ha, it gets a bit repetitive! But anyway, being a real gang of Einsteins they misplace the stolen money and are immediately suspected of the theft by their bosses!
They’re placed on administrative leave, and use the time to become even more ugly and unpleasant! Eventually they get their badges back, but almost immediately begin getting killed one by one! Is it the drugs gang taking their revenge, or is it a traitor within the ranks! Ha ha, in either case, whoever is behind the killings, you want to pin a medal on them!
A lady police cop played by the Olivia Williams from Maps to the Stars gets mixed up in things, and even puts a kissing on the Schwarz at one point! You can really see her screwing up her courage before she does! But we (and Olivia Williams) are spared the subsequent scene of sweet lovemaking!
The movie falls apart as it goes on, defying logic more every minute through the third act! That’s because it was meant to have a completely different ending, I later found out, and one supposes it made a lot more sense! Ha ha and dog cookies, it sure doesn’t now! It’s a pretty unpleasant movie besides – it seems to go out of its way to be grotesque and horrible! A typical scene, for example, has Arnie pouring a glass of scotch and rewatching the family torture tape sent to him by the reeba-reeba gangsters! Ha ha, yikes!
It’s got some moments, and Arnie’s not horrible in his role, but in the end the movie really does fall apart as spectacularly as the bodies of its many casualties! Ha ha, I’m going to give Sabotage just one of Arnie’s stinky cigars!
Posted by Burl at 12:30