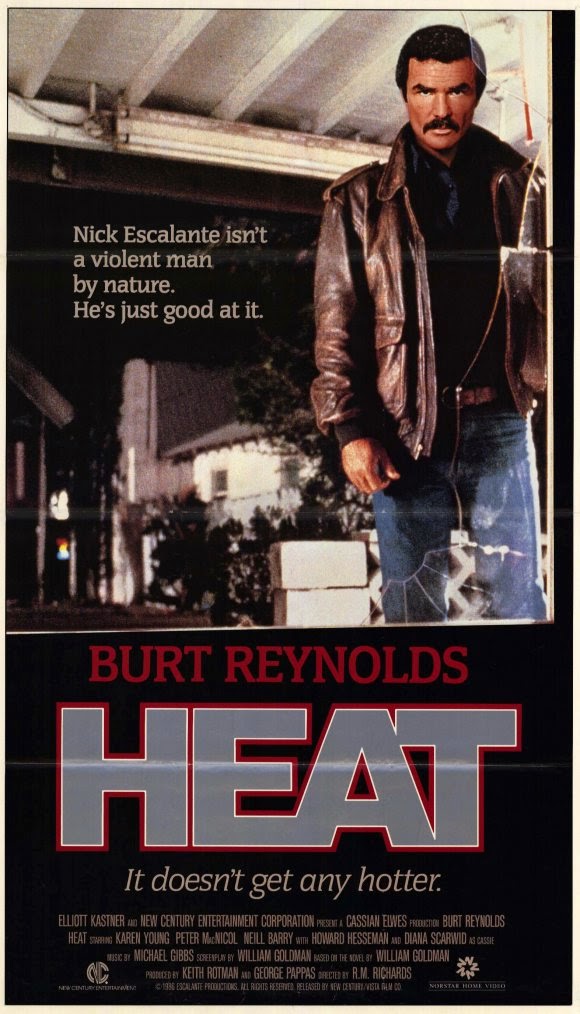 Hello and hello, it’s Burl here! It’s December now, and that means it’s okay for Burl to knowingly watch a Christmas-set action movie! Ha ha, remember Cobra? That was a stealth Christmas picture, and so is this one too! “This one” is of course Burt Reynolds’s Heat, the third and last of Burt’s one-word-title series of 85-87! Stick and Malone are the others, naturally!
Heat comes with a curious pedigree: the script is by William Goldman, and the picture was supposed to be directed by none other than Robert Altman! Altman dropped out (though at least one Altman actor, Neill "O.C. & Stiggs" Barry, remained in the cast) and was replaced by the fellow who did Death Valley, Dick Richards! But Heat was a case of perpetual miseries for Dick, it seems – Burt put a punching on him for some reason, and then later he (Dick that is) fell off a camera crane! Ha ha, Mr. Richards, those things have seatbelts for a reason! Anyway, he never directed a picture again after that!
Heat was clearly a Troubled Production, and that troubledness shows up most clearly in the ramshackle plotting! Burt is an invincible warrior with one of those anti-gun action-man codes (I always appreciate that, ha ha!), and a line in poking people with “edged weapons;” but he’s also a problem gambler with a self-destructive streak and a simple dream to visit Venice! To say that these two aspects sit ill with one another is to gravely understate the case!
Burt, playing Nick Escalante, works out of a dingy Las Vegas office which he shares with Howard “Rubin & Ed” Hesseman, of all people! The nature of their partnership, if indeed they are partners, is obscure, but Burt’s specialty seems to be helping nerdy little guys gain self-confidence! Ha ha, it’s easy to imagine he has his own little comic book ad showing the tribulations of a wimp at the beach!
His latest little nerdy guy friend is played by an actor I’ve always liked, Peter MacNichol, who was good in Dragonslayer and the best thing about Ghostbusters II! His character, Cyrus, wishes to learn the secrets of bravery, and Burt tries to teach these to him as he also joins a vengeance-battle against a spoiled-rotten mafia son and his enormous bodyguards!
There’s not much action in the picture, outside of a violence fight or two; though the climax has some Novelty Henchman Deaths you’ll enjoy, ha ha! But there’s also some gambling here, and Diana Scarwid, much better here than she is in Strange Invaders, plays a sympathetic dealer who watches Burt win and then promptly lose a fortune! I usually hate such scenes, but this one isn’t too bad, mainly because of how pathetically Burt plays it! (I don’t mean his acting is pathetic, but the character, ha ha!)
I don’t want to rank Heat with the other Burt One-Worders, but if I did it would probably be at the bottom! It’s occasionally entertaining, and has a few bon mots, but mostly feels like the work of people aggressively on autopilot! Burt’s character is slippery and undercooked – he’s portrayed as a kind-hearted softie in one scene, and next thing you know he’s playing for only one team, that’s Team Escalante! But if you’ve seen Malone and Stick, and you’re a completest by nature, you’ll want to see Heat! I award it one and a half kneecap blowouts!
Posted by Burl at 11:44