Burl reviews The Werewolf vs. the Vampire Woman! (1970) 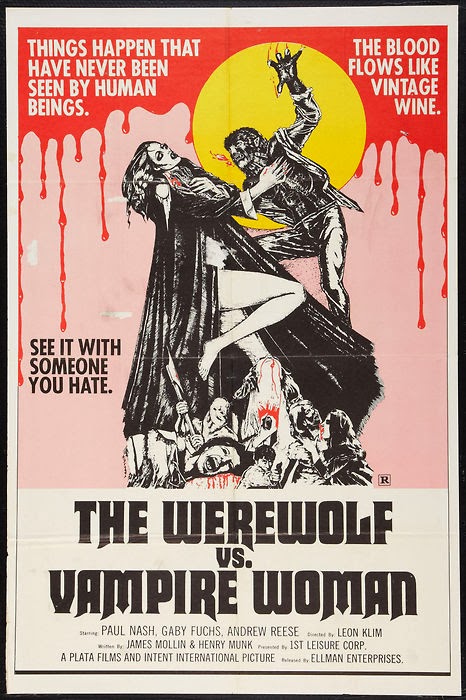 El lobo fantastic, it’s Burl! Ha ha, I’m here to review another effort from Paul Naschy, the Iberian Chaney Jr., who of course also starred in House of Psychotic Women! This picture is called The Werewolf vs. the Vampire Woman (though I saw it under the title Blood Moon), and it’s one of the many movies in which old Naschy plays his tragic continuing character Count Waldemar Daninsky!
Having evidently been “killed” in the previous installment of the Daninsky saga, this picture opens with old Waldemar on a slab as a haughty coroner digs out the silver bullets from his chest! Ha ha, this proves an unwise gambit, as Waldemar soon sprouts a shaggy growth on his face and puts a biting on the coroner and his pal! Then the bulky lycanthrope moves into a large house in the country, the sort avoided by sensible villagers, especially around Walpurgis Night!
Ah yes, Walpurgis Night! It sits on the opposite side of the calendar as Halloween, but it’s apparently just as spooky, as Waldemar emphasizes to the two nubile young ladies who show up at his castle after they suffer car trouble while hunting for the resting place of a notorious witch! Waldemar is looking for the very same witch, so everyone gets along splendidly! Ha ha, one of the ladies even falls in love with Waldemar!
But of course there are complications! The witch is also a hemogobbler, and she’s resurrected easily enough when one of the ladies cuts herself over the grave! Isn’t that always the way, ha ha! Then for a while we get alternating werewolf and vampire attacks, some of them pretty bloody but not memorably so! The vampiress is often shown approaching her victims in slow motion and this produces a genuinely eerie effect – I think it’s more successful here than it was in those Blind Dead pictures, and this picture came first!
But for the most part it’s a pretty talky picture, and you have to wait a long time for the promised monster mash! The climax, when it comes, is a bit of a disappointment! Waldemar spends the whole picture worrying and warning about the horrors of Walpurgis Night, but not a whole lot seems to happen on that fateful evening! Nothing more out of the ordinary than has already been occurring, anyway!
So that’s too bad, but the matted werewolf makeup and Naschy’s committed performance from beneath it will certainly keep you interested! There are pretty ladies and spooky scenes, and a monster battle with a foamy disintegration at the end – ha ha, what more do you want! I’m going to give The Werewolf vs. the Vampire Woman two painted-on widow’s peaks!
Posted by Burl at 16:25