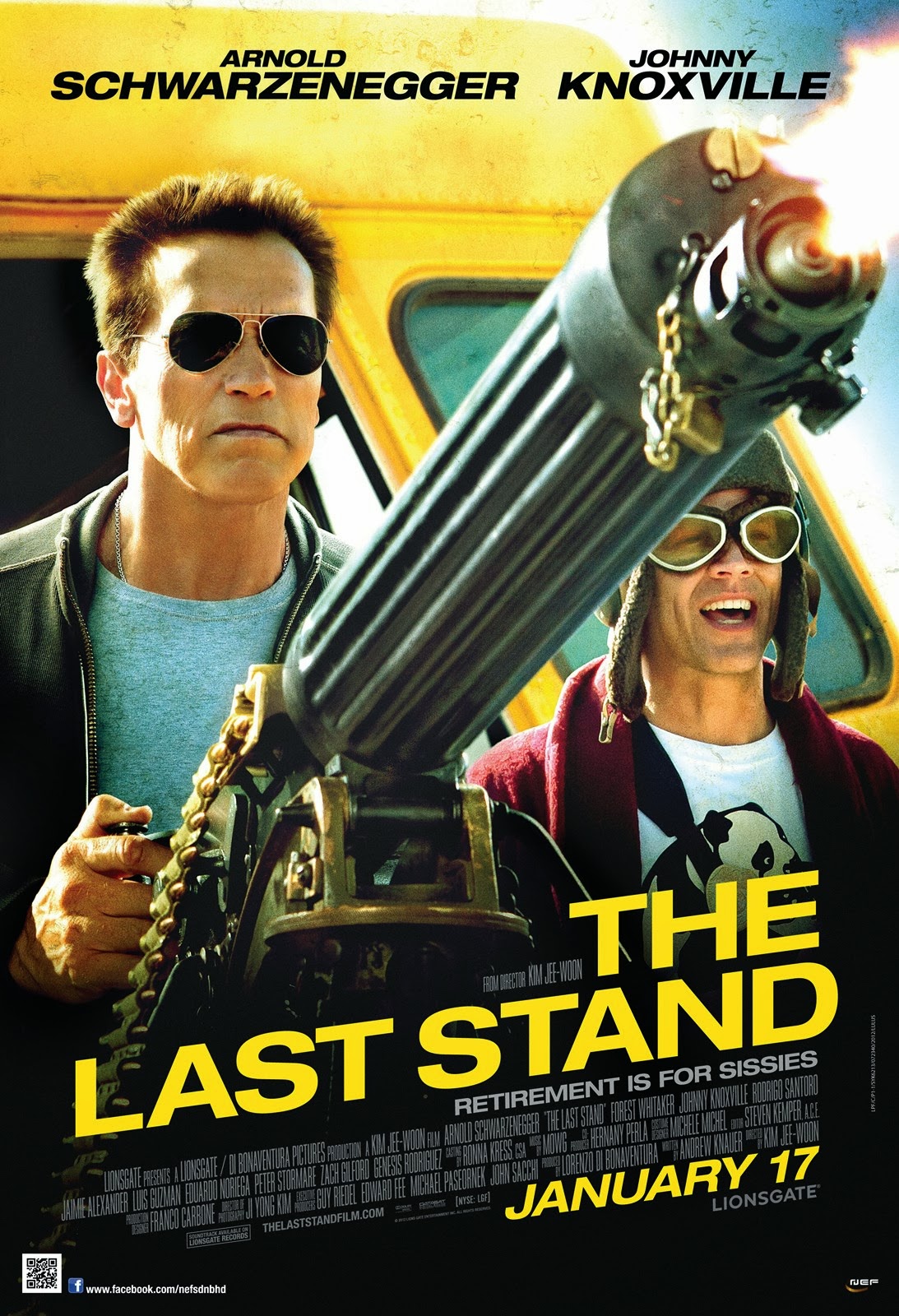 Ach, ach, it’s Burl, here to review some geezer action! This is The Last Stand, one of these new Arnold Schwarzenegger pictures! Arnold, of course, is famous from pictures like Total Recall and Junior, and now of course he’s appearing in movies like this, where he looks like what he wishes he would look like as the fifth head on Mount Rushmore if it was carved out of a big jerky slab and appended to the mountain by means of a rebar substructure! Ha ha!
As he has so many times before, he plays an Austrian fellow with a curiously un-Austrian name! This time he’s Ray Owens, a bordertown sheriff who becomes convinced that a big-time Mexican drugs lord in a superfast car is racing his way in a bid to cross the frontier by a hastily-erected bridge! This criminal is busted out of Forest “Fast Times at Ridgemont High” Whittaker’s custody by an elaborate, ridiculous plan, and from then on it’s ai-yai-yai-yai reeba-reeba time!
Ray Owens is of course no ordinary small-town sheriff, but an ex-big city cop with a story to tell! Ha ha, it would have been more interesting, I think, if he’d been just as inexperienced as his deputies, but managed to best the drugs lord anyway! In other ways the picture tries to undercut the action movie clichés Schwarzenegger himself did so much to cement in his earlier pictures! When one unlucky deputy fatally catches some lead, for instance, the ropey muscleman takes him in his arms and cries with unrestrained grief! Naturally there are also a number of Old Guy jokes, of the sort we find in those Expendables and RED pictures!
In the meantime there’s plenty, and I do mean plenty, of scenes involving the fast car, and probably at least a dozen snap-zooms into the gearshift as the drugs lord punches it into some stratospheric high speed! There’s a little bit of plot business involving a turncoat Fed, but not nearly as much is made of this as I expected! It all leads to a curiously, but pleasingly, unspectacular final punchfight on the jerry-built bridge! And the most curious thing of all is that the drugs lord isn’t even killed at the end, merely hurt a lot and taken into custody! I liked that, I must say! Of course there are plenty of underlings, particularly Peter “The Big Lebowski” Stormare, who do fall to the roughest of justice, so audience bloodlust is sated in plenty!
I would like to pay a quick tribute to the supporting cast! There’s Whitaker and Stormare of course, but you also get Luis Guzman as a deputy and a very special cameo from Harry Dean “The Long Ride Home” Stanton, who comes to a pretty sticky end, ha ha! It's a great bunch of fellows, and they really help make this an entertaining bouffant of a picture!
The picture is the North American debut of Kim Jee-Woon, the fellow who made I Saw the Devil, and I find it an interesting comparison to Stoker, which of course is the North American debut of Kim’s fellow countryman, Chan-wook Park! Ha ha, you’d be hard pressed to find two more different pictures! Of course that’s because they’re very different directors, but these are two pictures from Asian directors with baroque styles each releasing their first big Hollywood pictures within a few months of one another, so you can see why they invite comparison! Ha ha! But I’m not going to follow through by revealing which one I think is the better movie, except to say that I enjoyed The Last Stand on its own modest merits, and I’m going to give it two flying Dean Stantons!
Posted by Burl at 22:56