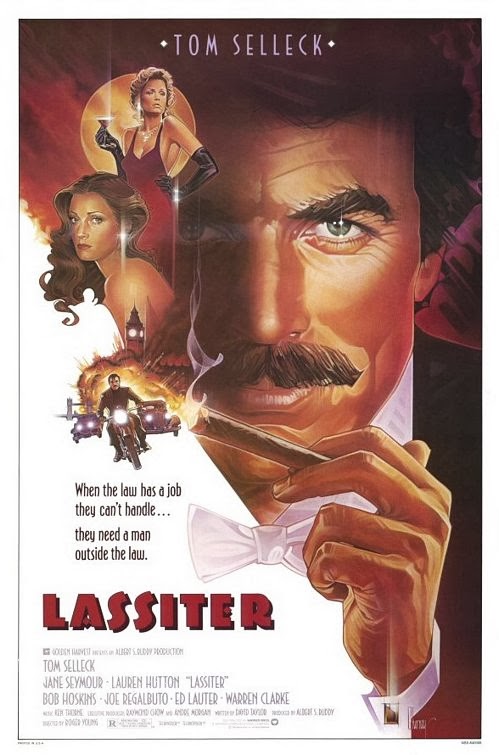 Hut hut, it’s Burl! That’s right – Burl talking! I’m here to review a picture that’s long been forgotten and swept into the dustbin, and that picture is called Lassiter! Ring any bells? Ha ha, I thought not!
You might be more familiar with the picture’s star, Tom Selleck, who of course is well known for his roles in Terminal Island and Midway, and, of course, High Road to China! He stars as Lassiter, of course, who is a jewel thief living in pre-war London for reasons of his own! Lassiter seems to have a pretty good life: he creeps around in the houses of the rich, plunders their valuables and then goes home to his taxi dancer girlfriend, Jane Seymour – Dr. Quinn, Medicine Woman herself!
But then suddenly an extremely angry Bob Hoskins shows up in the company of a meek FBI man (played by Joe Regalbuto from The Sword and the Sorcerer) and demands that Lassiter must steal diamonds from the Nazis! Ha ha, Lassiter doesn’t want to, but they pressure him pretty hard! The rest of the picture involves Lassiter refusing this offer he can’t refuse, and planning the job, and then figuring out how he can get away from the nasty Hoskins, who actually presents more of a threat than the Germans!
It’s June of 1939 in this scenario, so the war is a couple of months away from being on in earnest! I guess then it makes sense that the Nazis would never seem particularly threatening, but on the other hand they make such attempts to create nasty antagonists – the sadistic dragon-lady played by Lauren “Malone” Hutton, and a brutal henchman essayed by none other than Dim from A Clockwork Orange – that the failure is particularly notable, and egregious!
For most of its running time, the picture seems to be completely twist-free, with everyone expressing their motivations and intentions with complete honesty! Ha ha, thankfully the last act features a bit of double-dealing, but it’s too little and too late I’m afraid!
Selleck and his period-inappropriate moustache engage in a few lite-action scenes, but they’re never very exciting, and are scored with completely the wrong sort of music! Sure, the tootling jazz music may be of the time, but it drains the picture of any suspense or excitement in might otherwise have managed! Ha ha, why not use, say, the sort of music that you’d have found in the crime movies of 1939? A much better choice!
The picture had a medium-decent budget, and some talented people behind the camera! But it’s not the lavish style-fest the poster implies, and is often a little bland in its execution! The director (a nice guy – ha ha, I worked with him once!) mostly does TV, and that shows here, I think, even if he does try to spice things up with a little nudity and kinkiness! Ha ha, and the Nazi dragon lady bit is so ludicrously overdone as to be ha-ha-halarious!
The thing that might have saved the picture, even in the absence of style, suspense and complex plotting, would have been a performance of Cary Grant-level charisma from Selleck! But, sadly, he’s pretty boring here! He manages to deliver a few lines pretty well (“Why, has my hair turned white?”), but there’s no pep to his performance, and very little to the film itself either! I give Lassiter one and a half end credits theme songs by Taco!
Posted by Burl at 23:28