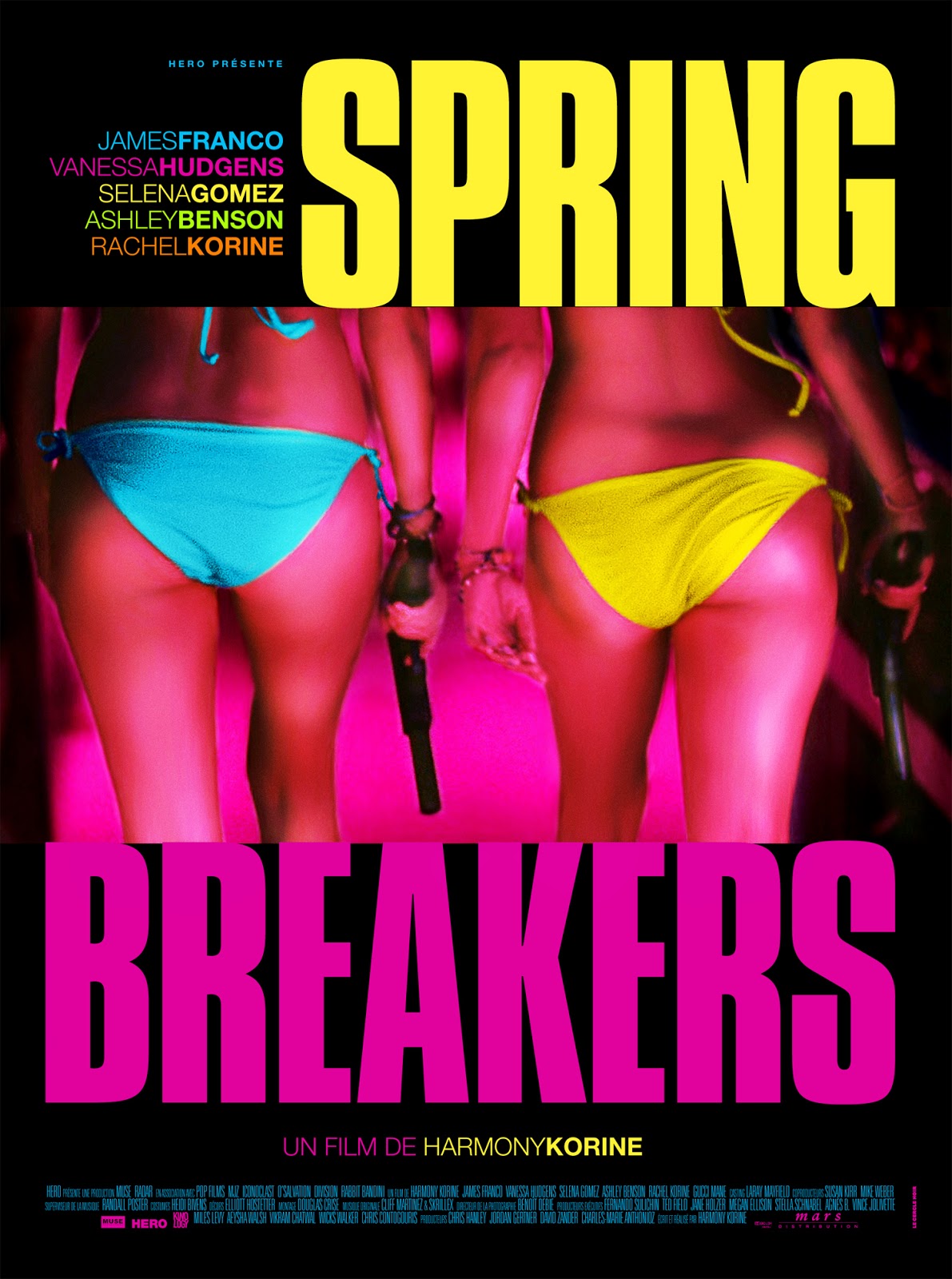 Ah ha ha, it’s Burl, here to review a movie about some ladies! Yes, these ladies are headed down to Florida for spring break, but this isn’t Where The Girls Are, or even Where The Girls Are ’84! It’s not even Spring Break! No, the picture in question is called Spring Breakers, and it comes straight from the director of Gummo! Yes, that director is Harmony Korine, who of course appeared recently in Stoker!
I remember seeing Gummo at a film festival and really enjoying it! And naturally I’m a big fan of Spring Break, so I thought this combination of elements was a no-miss situation, ha ha!
The picture features many shots of bikini ladies and their male counterparts! There’s a lot of rambunctious shenanigans depicted, and then we get the beginnings of a story: four ladies attending a small-town college decide that a jaunt to Florida is simply a must! But, ha ha, their funding is substandard, so three of them do a violence crime, then it’s off to the Dangleberry State, bikinis packed!
Once there, it’s partytime! Ha ha, there are all sorts of montages that are maybe meant to look fun, or maybe meant to look boring while dressed in the raiment of fun; and if that latter option is the case, then well done Mr. Korine! The ladies get into some trouble with mind drugs, and the next thing you know they’ve been slapped in the pokey, skimpy bikinis and all!
Next thing you know, the ladies are bailed out by James Franco from Rise of the Planet of the Apes! He’s essentially playing himself in the picture, and I think his character may even have been named James Franco, which is frequently the case with this actor, I believe! James Franco here sports many ugly tattoos and a hideous silver grill, and he owns many firearms! The ladies have different tolerance levels for James Franco and his lifestyle, and first one leaves the scene, and then, after being shot in the arm, another one is on her way home! That leaves two ladies left for a most unlikely climax!
Ha ha, I really liked the idea that the ladies would leave at just the point they felt they’d had too much! It was certainly the most realistic aspect of the movie! Otherwise there’s not all that much to grasp on to, ha ha, in the picture! There’s lots of pretty ladies in itty-bitty teeny-weenie, though not polka-dot, bikinis, it is true, and plenty of stylish visuals thanks to the grand cinematography of Benoit Debie, and there’s an entertaining performance by the actor who played James Franco! I would probably have appreciated more what Harmony Korine was doing had I been familiar with the goody-two-shoes past credits of at least two of the young ladies, for whom this picture apparently represented a wholesale change of pace! So there’s a whole meditation on the parallels between American celebrity and American life running through the picture, I suppose, or something of that nature, but ol’ Burl hasn’t watched enough contemporary tween-age TV to pick up on it I guess! Ha ha!
So as a result, for me, Spring Breakers was spottily amusing, consistently nice to look at (ha ha!) and ultimately pretty empty! I’m going to give it two dollar sign hubcaps and a hearty ha ha, and off I go to watch the true granddaddy of the form, Spring Break!
Posted by Burl at 21:42