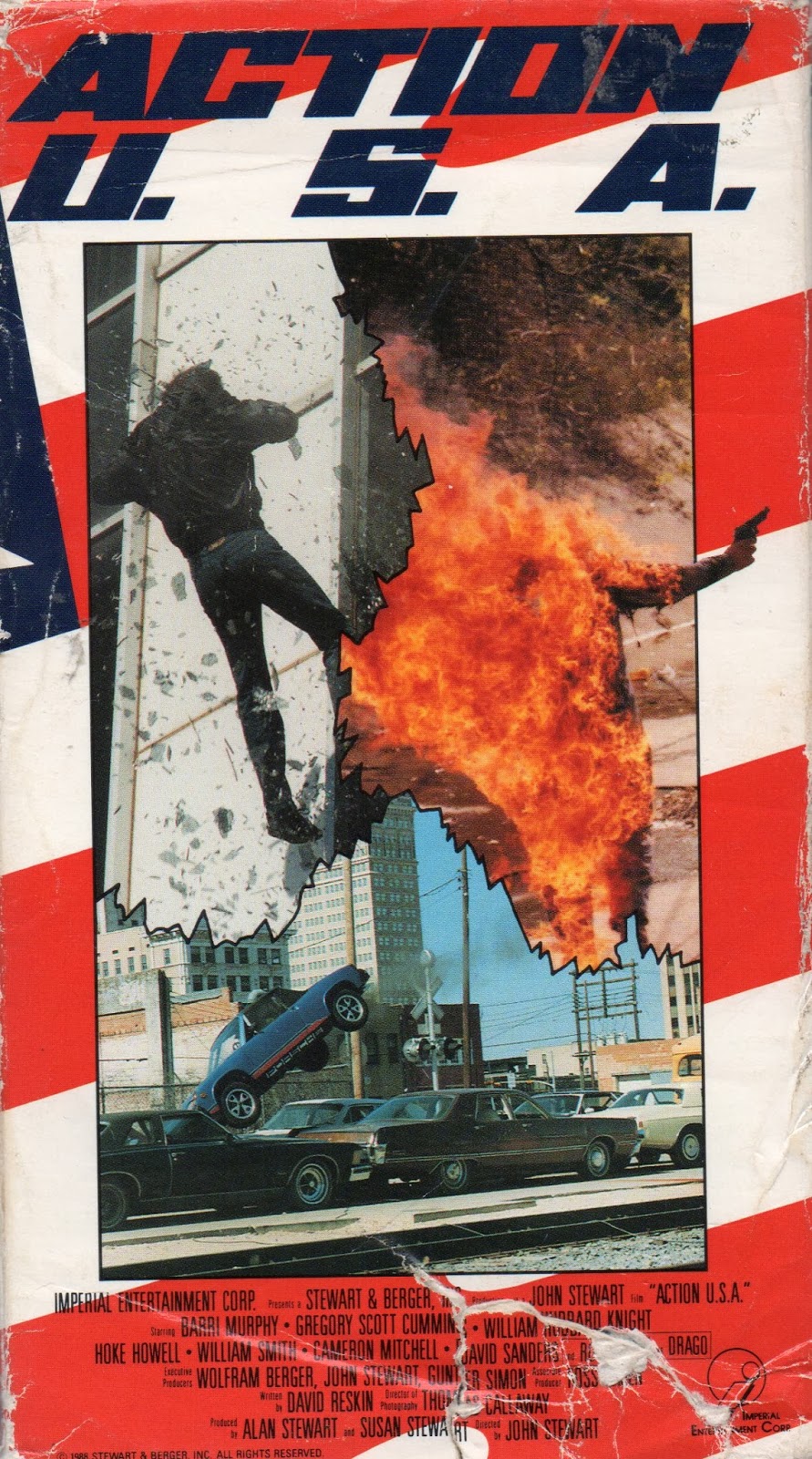 Ha ha, sorry about your house! It’s Burl here once again, with an action picture that is just a little too self-aware to qualify as Ridiculous Action (see Deadly Prey for a true example!), so it sits off somewhere within shouting distance of the Andy Sidaris movies, but with only a fraction of that oeuvre’s devotion to the female form!
This one is called Action U.S.A., and I’d never heard of it before the other day, when I scored a hockey bag full of VHS tapes from a pawn shop having a big giveaway! I dropped this one in the bag knowing nothing about it, then read a few reviews of it, all of which promised a rare treat: an octane-fuelled dynamo of a picture exploding with frantic action!
Well, ol’ Burl licked his lips and dived right in! Ha ha, location: Texas! A Good Old Boy named Billy Ray has stolen the mob’s diamonds again, and Don Supremo Cameron Mitchell, famed from his appearances in Gorilla At Large and Without Warning, is not happy about it! Meanwhile Billy Ray heads home to make sweet love to Carmen, his girlfriend! No sooner has the silver-tongued thugpoke watched Carmen take off her shirt and said “Those are lookin’ good,” when two sneering thugs grab him and hang him by his feet out of a helicopter for about two hours, then drop him in a lake! Finally they shoot him, and that’s when Clay and Panama, our Lethal Weapon-like heroes, appear on the scene, and then the chase is on!
Ha ha, Clay and Panama! Clay wears a leather jacket and looks like a normal guy in most shots, but from certain angles he resembles Mac from Mac and Me! Panama, meanwhile, is a nerdier version of Carl Weathers! Both of them exhibit a surprising amount of intelligence and charm for characters in a picture like this!
While the photoplay was not quite the unstoppable rocketsled of mayhem and twisted metal I had been led to expect, it was close enough for horseradishes! The initial thugs are blown up or crashcarted, and two new ones take their place, along with the fearsome Drago, a duster-sporting hitman played by Ross “Armed Response” Hagen! And his response is most certainly armed! There’s plenty of fireballs and flying bullets and bodies of guys proving themselves to one another hurtling through barroom walls and off bridge abutments!
And who is the granite-faced FBI boss? Why it’s Lonnie “Lucky Man” Johnson himself, William Smith, whom we know from pictures as diverse as Fast Company, Eye of the Tiger and Maniac Cop! Ha ha, great casting all around! Aside from the leads and the old ringers, the rest of the cast is made up of stuntmen, the demographic for and by whom this picture was made! Sometimes when stuntmen make a picture you get a Cannonball Run or a Hooper, sometimes you get an Action Jackson, and sometimes you luck into an Action U.S.A.!
It’s a picture well aware of its own excess, and it contains a few welcome dashes of weirdness; but it’s not a goofy wink-and-nod satire, which is very refreshing! Any doubt as to the picture’s bedrock sincerity must be laid to rest by the heartfelt thanks in the end credits to the Brazos Motel, Waco, Texas, where the cast and crew stayed! That must have been quite a party! Ha ha, I give Action U.S.A. two and a half babbling old gas jockeys!
Posted by Burl at 10:59