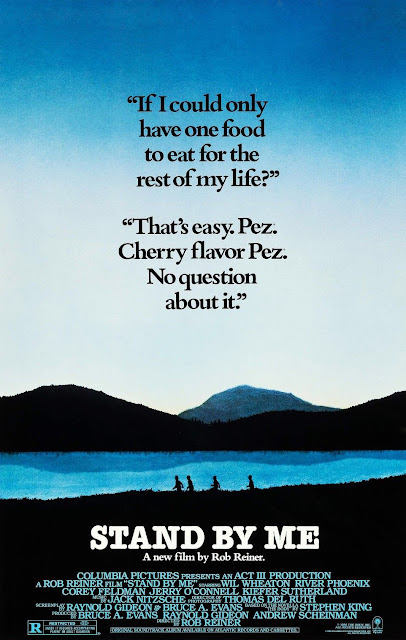 Ha ha, hi, it’s me, Burl! Yeah, you bet your fur it’s me! I’m here to review an old favourite of mine, a picture that, when it came out back in the summer of 1986, I hastily placed on my Top Ten list of all-time greats! The movie is Stand By Me, and though it’s long since been supplanted by many movies I much prefer, I still have a soft spot for this geezer classic!
Of course it’s based on a Stephen King story called “The Body,” but they changed the title so people wouldn’t be fooled into thinking this was a spookshow! And of course it certainly is anything but! It’s a warm-hearted late-summer snapshot of youth in days gone by, a story of how your friends can be a bunch of goofs, but they’re still your friends!
Yes, the story itself is very familiar: a group of youths played by Wil Wheaton (of The Curse), River Phoenix (of Explorers), Corey Feldman (of Friday the 13th The Final Chapter) and Jerry O’Connell (from Mission to Mars) hear about the body of a dead kid being found near the railway tracks, and embark upon a hiking mission to go check it out! Their trek is complicated by such obstacles as a testes-obsessed junkyard dog, some leeches and a group of older bullies featuring Kiefer Sutherland from Max Dugan Returns and Casey Siemaszko from Secret Admirer!
Anyway, the movie is mostly about the memories of small-town childhood in the late 1950s, and there’s a soundtrack of the goofy pop songs that were beloved at the time, tunes like “Rockin’ Robin” and “Lollipop!” Ha ha! And the lads talk of Goofy and of Lemure and of who would win, Superman or Mighty Mouse! There’s an elegiac, late-summer vibe that suits the themes to a T, and that is probably why I, a melancholy-prone youth on the cusp of leaving behind my own childhood when I first saw the film, embraced it so whole-heartedly! I still feel wistful when I hear the late, great Jack Nitzsche’s adaptation of the title tune, which plays on the soundtrack as the boys tromp homeward!
The lads are all good in their roles, particularly River Phoenix as Chris and Jerry O’Connell as Vern Tessio! Wil Wheaton is okay, but I always wondered where the second L in his name got to! And Corey Feldman, of the famed Two Coreys, doesn’t come across quite as crazy as Teddy Duchamp is supposed to be, but he’s still not too bad! The rest of the cast is good too, with Richard “Jaws” Dreyfuss as the Stephen King simulacrum, Marshall “A Nightmare on Elm Street 2” Bell as the sensitive kid’s one-note dad, and a special appearance by John “Grandview U.S.A.” Cusack! The movie looks good and is directed with simplicity and restraint by Meathead! Altogether I’ll give this pleasant concoction a ringing three Cherry Pezzes!
Posted by Burl at 13:14