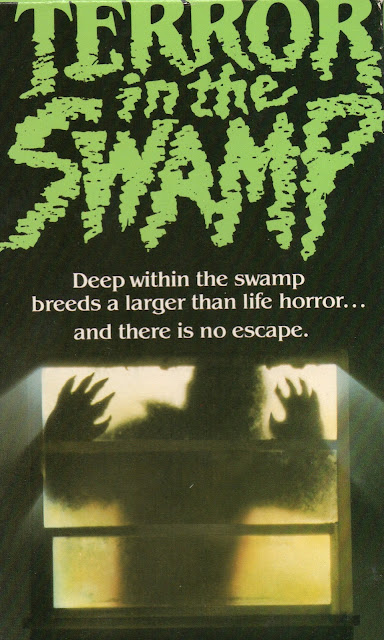 Ha ha, Burl here! It’s been a while since I reviewed a swamp-monster picture (remember Bog? Creature From Black Lake?), but here we go with another one, an old classic (ha ha!), the poster for which I had hanging in my room when I was but a teenager! Yes, that’s right, we’re talking about Terror in the Swamp!
This picture was originally called Nutriaman: The Copasaw Creature, but New World Video rightly thought they should probably translate that into English for general North American release! It takes place in the deep, deep, deep south somewhere – it’s a magnificently regional picture, ha ha – in some swamplands where the people who don’t make a living from moonshinin’ do it by trapping fur-bearing rodents called nutrias!
The local game warden is played by a mustachioed individual named Billy Holliday, who bears no evident relationship to the blues singer! He discovers a man whose face has been covered in tomato paste by some creature or another, and almost right away the coroners and police realize they’re dealing with a monster nutria! In the meantime, two behemoth swamp brothers and their unpleasant swamp pappy find that nutria or nutrias unknown have been messin’ with their trapline! They recruit a buddy to help track the black beast to its lair, but don’t get much further than downing a few jugs of shine before tragedy strikes!
The giant nutria has also been scaring old ladies and pulling other hapless parties into the swamp! But when I really knew this movie was the real deal was when the two citified science-fellers responsible for the beast showed up! Ha ha, one is even more citified than the other! They’d been trying to breed giant nutrias for fur companies, so it would take only one of them to make an entire coat, but of course the experiment has gone awry! Ha ha, always awry!
Well, there’s plenty of excitement with the game warden, the police, the scientists, the overall-clad brothers, a general mob of swampbillies and a four-eyed, ratty-faced ex-Green Beret correctly dubbed by Joe at Bleeding Skull as “John Ramboo” all after the poor nutriaman! Of course dynamite comes into play, and several lives are lost in the fray! But all is rendered safe again in the swamp – or is it?
Ha ha, this is a picture I can really get behind! It’s poorly made for the most part, but has a few nice shots of the swamp and of the creatures who dwell within it! Of the two brothers, Jesse and T-Bob, T-Bob is both the fatter and the better actor! (Though it was Jesse who ended up in Fandango!) His performance is actually quite good! You can’t say that about too many of the other thespians, but they try gamely, and in the case of Billy Holliday, game wardenly! There could be a bit more of the red stuff for my taste – a few heads coming off and that sort of thing – and it’s not very scary, but overall the movie has a swampy, regional flavour that can hardly be beat! I give Terror in the Swamp two and a half burbling nutrias!
Posted by Burl at 09:11