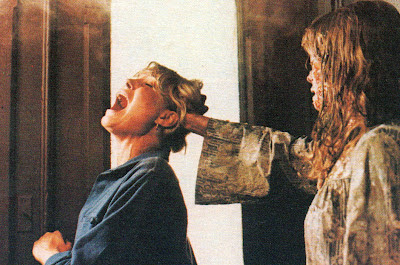 Ah ah, ciao amici, qui é Burl! Yes, I’m here to review one of those pictures commonly referred to as a “Pastaland Chunkblower!” Of course Lucio Fulci was the master of these pictures, or one of the reigning masters anyway, and his movie City of the Living Dead was one of the grosser examples of that notoriously gross genre!
Ha ha, I first saw this picture years ago under the title Gates of Hell! I always thought of it as one of the lesser lights in the Italian-zombie-movies-released-on-video-by-Paragon group of films, but now I’m having to reconsider! (I guess I ought to see Dr. Butcher M.D. again before I fully commit to this opinion!) But I remember thinking there weren’t that many zombies in Gates of Hell/City of the Living Dead, and that the gore, which is what I was looking for in the movie, had kind of been replaced by the people vomiting up their intestinal tracts, which for me was not so much gore as just really grotesque and unsavory!
It certainly is those things, of course! But in re-watching the movie recently, I found it pretty gory in a conventional sense after all! The zombies’ favourite method of murder is to just grab you by the back of the head and rip your brain out! Ha ha, yuck! And of course there’s the famous drill press scene, which I guess is this movie’s version of the splinter through the eye from Zombie! How did they do it? I still can’t figure it out!
The story has more going on than the usual Italian zombie picture, too! It’s almost like a cross between the down-n’-dirty Zombie and my secret favourite of the bunch, the weird and great Zeder! (If you haven’t seen that one, you certainly should!) It’s as though, instead of taking the whole of Dawn of the Dead as inspiration, they took just the spooky scene where Peter tells of his grandfather’s playful motto: “When there’s no more room in Hell, ha ha, the dead will walk the earth!”
In a nutshell, the story is this: A priest hangs himself in the graveyard of Dunwich, New England! Who knows why, but in doing so he manages to open the gates of hell! Next thing you know, barflies are being terrorized and an unholy ruckus spreads across town! The priest can appear and disappear wherever he likes! A harmless oddball is drill-pressed! And a psychic who almost got buried alive (a great sequence!) joins forces with Christopher George (famed from his role in Mortuary!) to investigate the happenings in Dunwich! And then what happens?
Well, many brains will be ripped out, that’s all I can tell you! And the zombies are actually kind of scary, which usually isn’t the case in these films! On the other hand, none of it makes much sense (which usually is the case in these films, ha ha!), and while it’s all attractively photographed in that low-budget Italian manner, it seems to end prematurely, before the concept has had time to mature and flower to its true potential!
I remain impressed by the movie’s commitment to disgustingness! Even in the small scenes that have nothing to do with anything, this tendency displays itself! I enjoyed it when a cop discovers a lump of putrid, unidentifiable stuff on the floor and says “Inspector! What the dickens is this?” Ha ha, what the dickens indeed? On the basis of this and other such vignettes, I give City of the Living Dead two and a half near misses with the pickaxe!
Posted by Burl at 22:10