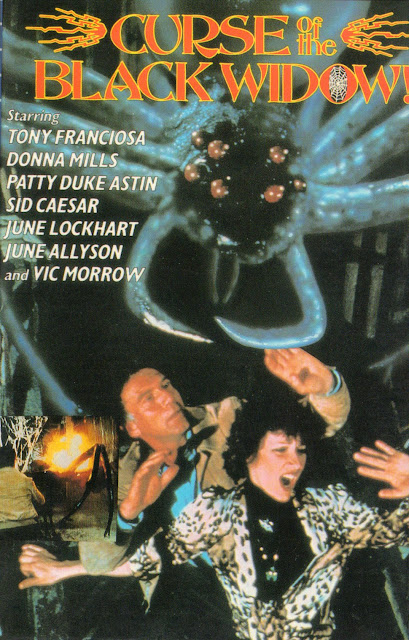 Hi, Burl here with a review of a TV movie! I haven’t reviewed too many of these old boys so far – This House Possessed and The Horror at 37,000 Feet are probably about it – but I usually enjoy watching them! Like This House Possessed, this is one I watched on or near its original broadcast, and it scared the terwilligers out of me! I’ve mentioned my gut-churning terror of giant spiders before, in the review of The Strange World of Planet X, I think, and it’s my belief that my viewing of Curse of the Black Widow as an impressionable young chap was the inspiration for this life-long phobia! (I’m not scared of spiders in general though, just enormous ones that might try to eat me! Ha ha!)
As in any TV movie of the era that had to stretch itself out to 104 minutes, there’s an awful lot of padding filling out this Naugahyde package, but the basic story of Curse of the Black Widow runs as follows: a glamorous mystery lady is stalking Los Angeles bars, picking up men in sport coats and then terrifying them in some unspecified manner and leaving them drained husks, often swathed in mysterious webbing! Ha ha, turns out she’s a were-spider, and hot on her trail is smooth-operating consulting detective Tony Fransciosa, well known from Death Wish II, and a gruff police investigator played by Vic Morrow from Humanoids From the Deep! Ha ha, Vic Morrow’s character is named Conti, but for some reason Fransciosa always calls him “Gully!”
Anyway, as per many TV movies and most Dan Curtis productions, there’s a lot of family drama woven into this situation, along with several strange time-wasting digressions and an often-inappropriate musical score, as well as many hideous sport coats! This is why I’m a big fan of so many Dan Curtis productions, in particular Trilogy of Terror, which was the first horror movie I ever saw, and Burnt Offerings, one of Dan’s rare theatrical efforts! (I never was a Dark Shadows fan, however – it just seemed like any other soap opera to me, with a few extra drifts of fog here and there!)
I became pretty confused about two thirds of the way through Curse of the Black Widow when a number of older ladies started showing up and the family drama bit really kicked in! I must not have been paying enough attention, because I really had no idea who was who, what their relationships to one another were and what the conflicts were all about! But being totally at sea didn’t diminish my enjoyment of the picture one bit, ha ha!
And what a cast! Vic Morrow always plays a good grouch, and Max Gail plays, yes, a disheveled cop, this time named “Rags” instead of Wojo! The mysterious old ladies are played by the likes of June Allyson and June Lockhart! Sid Caesar and Jeff Corey play two of the padding-providing ancillary characters, Pinky Tuscadero plays “Flaps,” the secretary, and there’s a great cameo from none other than Hard Boiled Haggerty, playing a man who once saw the giant spider but no one believed him!
The actual giant spider, when we finally see it at the end, is a little bit fake looking, I have to say! It’s still plenty scary though, especially when you’ve got a phobia like mine! I give Curse of the Black Widow two and a half bargain-basement arachnoid transformations!
Posted by Burl at 20:45