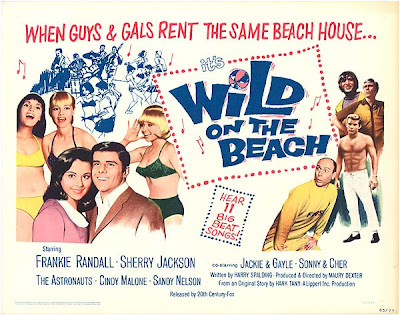 Hi, Burl here! Ha ha, do you love a beach movie as much as I do? I’m not necessarily talking about those Frankie and Annette movies, although they have their pleasures! I’m thinking more of the non-A.I.P. ones of the same period, pictures like Ride the Wild Surf and It’s A Bikini World, and some of the more recent Crown International classics like Malibu Beach and The Beach Girls! Sunset Cove and Beach House are pretty good non-Crown examples!
Well, I thought I might have unearthed a rare gem when I found a VHS copy of Wild on the Beach for sale! I’d never even heard of it! Word on the picture turned out not to be good, but I’m well-practiced at shoving aside bad notices and watching a movie anyway!
It turns out the naysayers were right about one thing: there’s virtually no beach in Wild on the Beach! After some stock beach and surfing footage under the titles, we repair into a beach house and rarely leave again, and if we do it’s to go to a university office or a bar or another beach house! But guess what: beach houses and beach bars are great places to set a movie! I’ve always had a deeply romanticized notion of beach houses and have always wished to own one, and even though the interiors of this particular beach house were obviously sets in some rented soundstage somewhere, just knowing they were supposed to be in a beach house was kind of thrilling!
The plot is kind of similar to both Beach House and The Beach Girls! In all cases there are two competing parties vying for the full use of a beach house! Here the stakes are higher than simple beach-life enjoyment, ha ha! A young lady named Lee is planning on living in her deceased uncle’s beach house and renting the other rooms to cover her tuition, but a young fellow named Adam is already there with a bunch of his buddies, staking a squatter’s claim on the residence and also some vague story about his father’s friendship with the deceased uncle! There’s an oft-mentioned campus housing shortage and an unlikely new rule from the board about how students who can’t find school-sanctioned housing must withdraw from their courses and find somewhere else to get an education!
Soon Lee and Adam are racing to be the first to get the necessary permits to make the house an official student residence! That strategy didn’t make much sense to me, but ha ha, what do I know about university housing regulations of the 1960s! I do know that I find endless repetition of the word “permit” a little stifling, especially it they pronounce it “per-mit,” as if it was a verb, rather than the more normal “per-mit!”
There’s also middle-aged men galore if that's your thing! We’ve got a slaphead university employee who keeps searching the beach house, an angry dean who’s a cross between John Vernon in Animal House and the head elf from the Rudolph Christmas special, and a beach neighbour who’s a would-be record producer and would-be lothario who chugs pitcher-fulls of martinis! Where most movies in the genre end with a dance party on the beach, this one ends with a dance party in the beach house! Ha ha! And there’s a rousing musical number from The Astronauts, singing a song of warning about Speedy Gonzales! (You can see that number here!)
It’s not a great movie, but it has many small pleasures woven through it! But where most beach party movies are filmed in widescreen and bright colours, this one is black-and-white and stubby! I wonder if they couldn’t afford colour and so decided to set their movie largely indoors, or if they looked at the lack of beach scenes in their script and decided they may as well shoot in monochrome? It’s a puzzlement! Anyway, I give Wild on the Beach one and a half surprise appearances by Sonny and Cher!
Posted by Burl at 10:26