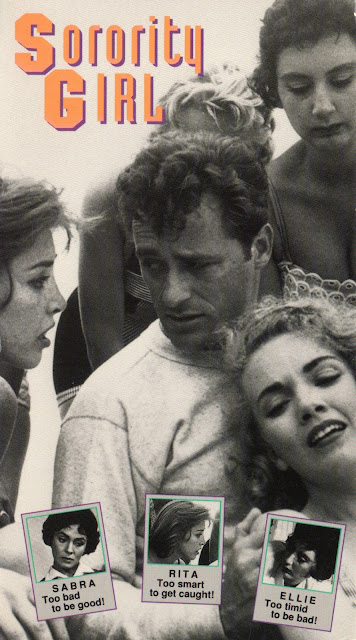 Hi, Burl here to review a movie about sorority girls! Ha ha, not for the first time either! But this one is actually called Sorority Girl, and it’s another Roger Corman drama movie much like Carnival Rock, which it strongly resembles! Like that picture it features the tragic and beautiful Susan Cabot and the fantastic Dick Miller, and like that picture too it weaves exploitable elements into what might best be described as kitchen-sink character drama! Or maybe the weaving goes the other way around, hard to say!
Cabot plays a rich sorority girl in Beta Pi or Sigma Ki or whatever – ha ha, it’s all Greek to me! – and has failed to make any friends there merely because of her mean, haughty attitude, her sadism, her spiteful remarks and her constant air of exasperated superiority! Barboura Morris, even more gorgeous here than she was in A Bucket of Blood, is the good-girl sister-with-a-secret, and Dick Miller plays a local guy who I’m not sure is a student or not, but who owns the local rock-dancing club! He’s the voice of reason, just like he was in Carnival Rock!
Cabot has a gooney-bird of a girl under her complete command, and uses this hapless lönguebönes to help her play mean-spirited tricks on the other girls! She engages in meddling and blackmail and brutal spankings! It’s up to Dick Miller to save the day when her scheming puts the life of one girl at risk!
Ha ha, there’s a bit of rock and roll in this picture, a smidgen of heavy petting and the dramatic centerpiece, the spanking scene! But there’s also a lot of bitchy bickering, wailing, simpering and pleading! It sure is dramatic! And my reading of the very end is that it’s about to get much more dramatic as Cabot’s character walks grimly into the sea, but nowhere else have I seen this coda mentioned! Maybe it’s obvious to everyone else that she’s just going for a swim to cool off! Ha ha!
There’s lots to recommend this sixty-minute special! Obviously Dick Miller is a huge plus, as always, and Cabot and Morris are both gorgeous and convincing! Like Carnival Rock once again, this picture has a bizarre and surreal opening-credits sequence that leaves you a little disconcerted! It’s written and directed with the punchy zing you expect from a Roger Corman film, yet it can also seem a million minutes long if you’re tired or not in the mood! Ha ha, I recommend tracking it down anyway and giving it a look! And at least the VHS box has that terrific picture depicting Miller in his natural state: surrounded by beautiful ladies! I present Sorority Girl with two and a half freshly washed stockings!
Posted by Burl at 00:27