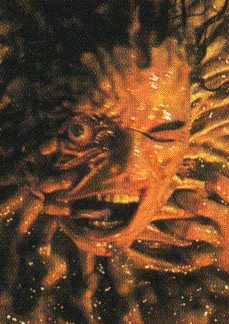 Hi, Burl here with a new review! Ha ha, I’ve not yet reviewed any of those Amityville Horror movies, so I may as well start with one of the least likely candidates! The actual Amityville, as most of you will know, is located on Long Island, but this movie, Amityville 1992: It’s About Time, takes place in sunny California! So it’s wrong-footing it with great dedication right from the beginning!
Ha ha, the big-faced and slightly scary Stephen Macht, from Nightwing and The Monster Squad, plays an architect who lives in the Burlwood Estates, ha ha, in a bland suburban home that kind of, sort of, if you squint a bit, might be thought by the undiscerning to have eye-like window formations vaguely recalling the classic third-story fan windows of the original Dutch Colonial-style home! He’s just returned from a business trip to, you guessed it, Long Island, and has inexplicably brought back an ugly old clock from the home he was visiting there! Yes, the clock is apparently salvage from the Amityville house, and yes it’s brought some cursedness along with it!
Bizarre things start happening involving dogbites, retro home decorating, unusual clothing, a giant, bowtie-clad fake bird and Dick Miller! Miller plays a neighbour whose hedges are immolated by the demonic timepiece, and he gets a great little scene which suggests a whole angry-neighbour subplot that was cut out of the picture – so often the fate of Miller’s performances, it seems!
In the meanwhile Macht becomes possessed by the haunted horloge, becoming the wimpiest, whiniest, most ineffectual possessee ever! His teenage kids go through their own trials at the hands of the cursed chronometer, but they take a ticking and keep on licking, ha ha! However, sundry neighbours, acquaintances and boyfriends aren’t so lucky! Ha ha, one fellow is reduced to paste by a puddle of slop in the basement!
Ha ha, the original 1979 Amityville Horror movie was a movie of homeowner horror, with its costly renovations, tricky encroachments and lost wads of wedding money! The pig eyes are scary too, but anyone who’s seen slime coming out of the walls of their own basement will find the picture particularly scary! The single best thing in this Amityville 1992 movie, besides Dick Miller, is the little model the possessed Macht makes of his new planned community made up entirely of Amityville Horror houses! Ha ha!
Well, Amityville 1992: It’s About Time doesn’t quite manage that level of terror! I don’t think it manages any level of terror, actually, unless images of barking dogs are frightening to you! The ugly clock drilling its way into the mantelpiece gives a hint of the damage-based horror in which the picture could have gone, but most of the movie is just a succession of strange events befalling these people, without any internal logic behind it whatever! It would be nice to say the picture’s plot works like clockwork, but that would be a big fat fib! I give Amityville 1992: It’s About Time one and a half swinging pendulums, and that’s almost entirely for the model housing estate and Dick Miller!
Posted by Burl at 13:08