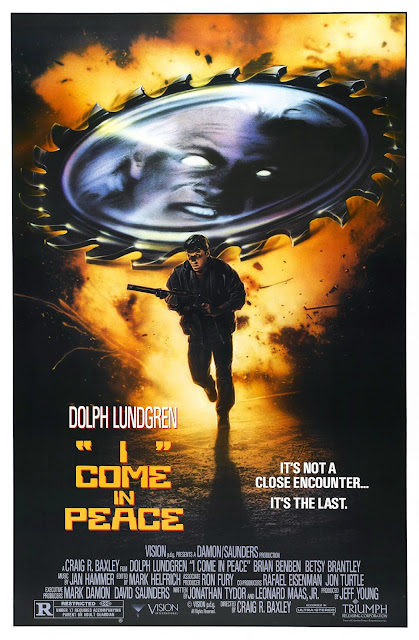 In a space-zap style, it’s Burl, here to continue my ha’-Christmas movie rundown, by which I mean reviews of movies that aren’t Christmas movies per se, but do take place around that time of the year! Ha ha, and here’s another happens-to-be-the-holidays movie, one more along the line of Cobra than, say, Trading Places! It’s Dolph versus the alien drug dealer in I Come In Peace!
As with most of the movies in this subgenre, the Christmas content is mainly crammed into the early part of the movie, as we follow a yuppie who plays carols on his in-car CD player! Ha ha, imagine the luxury! Well, the yuppie (played by Jesse Vint from Forbidden World, it should be noted) soon runs his Beemer off the road and has it blown up by a tall goony-bird alien from the planet Trenchcoat! He might be a cousin of the fellow from Without Warning, except with not quite so bulbous a head! The alien knocks down the yuppie and performs a procedure on him that will be repeated many times in the picture! It involves whipping a barbed cord into the victim’s chest, pumping in some kind of narcotic, then extruding something from the person’s brain! This particular substance is a powerful drug that’s very popular on Trenchcoat, and accordingly this alien criminal is being pursued by an equally tall alien cop!
The alien’s next stop is a drugs-deal, where he shows off one of his other weapons, a flying CD that cuts throats! Pretty soon rogue cop Dolph Lundgren, himself almost as tall as the aliens, is on the scene, and he gets teamed up with an uptight benben played by Brian Benben, and together they must overcome their mutual acrimony, battle the nefarious White Boys and figure out the mystery of the tall aliens and all the explosions that are happening around Christmastime!
Betsy Brantley, the mom from The Princess Bride, plays Dolph’s ladyfriend, with whom he bickers quite a bit! But he doesn’t bicker with her as much as he does with the benben! It’s funny: the benben gives the film’s most amusing performance, yet his character really doesn’t bring much to the narrative! I guess he was in there to provide the mismatched-partners element that was so popular at the time!
Other familiar faces include Michael J. Pollard from Next of Kin, playing, naturally, a weirdo who straddles the line between eccentric and developmentally disabled; and Al Leong, the longhair from Protocol and Die Hard, who defies all concepts of typecasting by playing not a henchman, but a luggage salesman! Ha ha! And then there’s the Terminator-like alien, who always says “Ha ha, I come in peace!” just before he puts a killing on someone! The role only requires that the actor be tall and wear painful-looking contact lenses, and these criteria are met adequately by this particular actor, who I believe is a German!
There’s not much to be said for the plot of this picture, nor for the dialogue, nor for the acting or directing; but there are many fine stunts and quite a number of explosions! If this is the sort of thing you’re looking for, it delivers the goods in sportsmanlike fashion! I give I Come In Peace one and a half benbens, which is what you would need to bring the one in this picture up to an average height! Ha ha!
Posted by Burl at 21:30