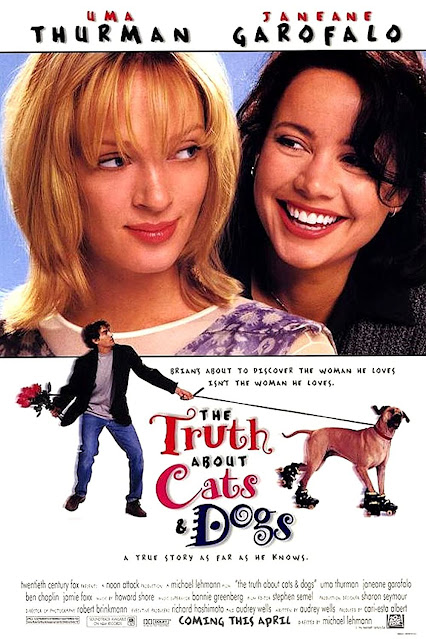 Woof woof woof and meow, it’s Burl, here to review romantic comedy! Ha ha, I’ll tell you a little story: sometime back in the 1990s, I got a very mild crush on one of the ladies who worked at the Circle K across the street! Encouraged by my roommates, I finally approached her and asked - very casually and leaving plenty of room for easy refusal - if she wanted to go to a movie with me! She said sure, and we went to one movie and she was very nice, but that was it for that! I never bothered her again, or anyone else while they were working for that matter! But now all these years later, while I do know we went to a romantic comedy, I can’t recall if it was Benny and Joon, which came out in May of 1993, or this one, The Truth About Cats & Dogs, released in the spring of 1996!

Ha ha, I suppose it doesn’t matter! I know I saw both movies in the theatre, in each case on a date, so I guess that’s why it’s all been blurred into one continuum of bland cinema! At the time The Truth About Cats & Dogs seemed like it might have had a chance to be something a little better, though – it came from the director of Heathers, and starred two ladies I thought were cool and attractive! And they were, and are, but the movie they made, well, ha ha, not so much! The star of the picture is Janeane Garafolo from Reality Bites, playing a radio veterinarian called Dr. Abby Barnes, who’s supposed to be an insecure wallflower who hasn’t played the blanket hornpipe in three years! Ha ha to that, says I! One day she takes a call from a British photographer named Brian, played by Ben Chaplin from The Thin Red Line, who’s having a problem with a big woof-dog on roller skates!

From here it gets almost too silly to describe! The big complication, which even these talented actors have trouble selling, is that Abby is too crippled by self-doubt to meet up with Brian in person, but instead contrives to confer her identity upon her neighbour Noelle, a vacuous but pretty lady played by Uma Thurman from The Adventures of Baron Munchausen and Mad Dog & Glory! So the whole of Act II is made up of situations where Abby and Brian speak on the phone and fall in love, alternating with mistaken identity scenes in which Brian is confused why Abby has an entirely different voice and personality when they meet in person!

Noelle goes along with all this, and even perpetuates it when she starts to fall for Brian too, and there are many instances of Abby almost telling Brian the truth but failing to do so at the last moment, and also comedy beats involving animals! Of course in the end it all works out more or less as it should, or rather, works out entirely as expected! Ha ha, in later remarks, Garafolo dissed this picture as lame and tame and saddled with a bland song soundtrack and characters dressed in Banana Republic-wear, and she wasn’t wrong! If there ever was any edge to it, or anything cool, it’s all been scrubbed away by the Venice Beach tides and the feedback of studio executives! Even Jamie Foxx from Due Date and Django Unchained, who plays Brian’s buddy or his colleague, or something – the movie doesn’t bother to give him much of an identity – has had all his corners knocked clean off!

It’s all done slickly, the acting is good, there are a few amusing bits, and some of the location work is fine (though it doesn’t feel like the Venice Beach I know - ha ha, Slithis was more accurate!), but it’s all a big bland 90s paste! Ha ha, no wonder I’ve mixed it up all these years with Benny & Joon! I guess it fits in too with Singles and the aforementioned Reality Bites and all those other 90s would-be hipster and with-it romantic comedies, but, wordy title aside, it kind of gets lost in the shuffle! I give The Truth About Cats & Dogs one and a half Saran-wrapped fingers!

Email ThisBlogThis!Share to TwitterShare to FacebookShare to Pinterest
Labels: 1990s, comedy, romance, saw it on a date, saw it on the big screen