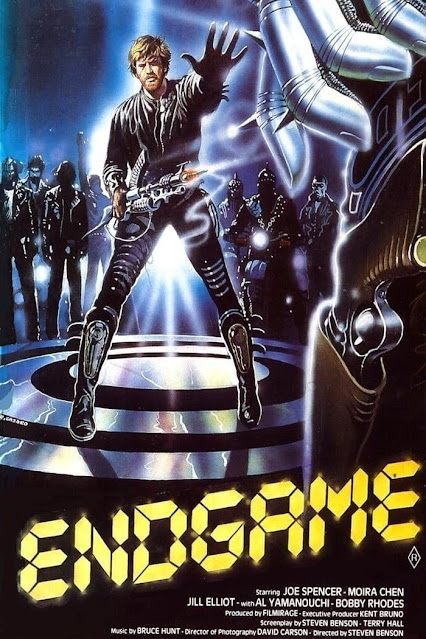 We all know about the Italian predilection for borrowing from the big genre hits of the day, and this picture evidently had a long shopping list, because we find elements of Escape From New York, The Road Warrior, and, for the climactic confrontation, even Carrie! Most amazing is the opening twenty-five minutes or so, which are a terrific simulation of The Running Man – ha ha, a good trick, since that wouldn’t even come out for another four years! Maybe it’s more of a Rollerball riff, but, as though it has the psychic powers possessed by some of its characters, Endgame hews pretty close to that Schwarzenegger hit nevertheless: our hero, Shannon, played by a fluff-bearded Al Cliver from Zombie and The Beyond, is the best player of the hit television violence-show "Endgame," in which he runs from a trio of costumed hunters! Ha ha, pretty Running Man!

Of course this also closely resembles another Italian picture that psychically predicted The Running Man, the Lucio Fulci joint The New Gladiators, which came out in 1984! But after Shannon dispatches two of the hunters who are after him, and evades the third – his old frienemy Karnak, played by big George Eastman from Warriors of the Wasteland – the movie shifts more to Road Warrior territory, as Shannon is recruited to shepherd a gang of psychic mutants to a safe location! These meek folk are led by a telepathic lady named Lilith, played by Laura Gemser, who was many times a Black Emmanuelle! And there are several scenes of Lilith and Shannon communicating by mind power, which means shots of their faces looking grave and stationary as their voiceovers run on the soundtrack!

Shannon has some pals to help him with the shepherding task, like Ninja, played by Hal Yamanouchi from The Life Aquatic with Steve Zissou, and another guy essayed by Gabriele Tinti from Cut and Run, and a few more of them besides! They have to fight legions of blind monks, a gang of mini-croscronics, and of course the animal people who sport prosthetic cat muzzles or painted-on fish scales! And among the psychics there’s a young lad with extraordinary powers, leading to a terrific Carrie-inspired climax in which the government baddies who want to kill off the mutants are exploded by flames, crushed by rocks or trucks, or fired upon by rogue machine guns!

It’s an enjoyable meli-melo, that’s for sure! It borrows so avidly from other movies that it becomes its own thing, and there are plenty of weird touches that make it memorable! I have a fondness for these movies – Warriors of the Wasteland, Exterminators of the Year 3000, After the Fall of New York, 1990: Bronx Warriors, Warrior of the Lost World, & c. & c., and this is one of the better ones, so I liked it! Oh sure, there are flaws – wooden acting, nonsensical dialogue, a general lack of coherence – but are these really flaws? Ha ha, that’s in the mind of the beholder, and my recommendation is that you behold this one if you get a chance! I give Endgame two and a half floating rocks!