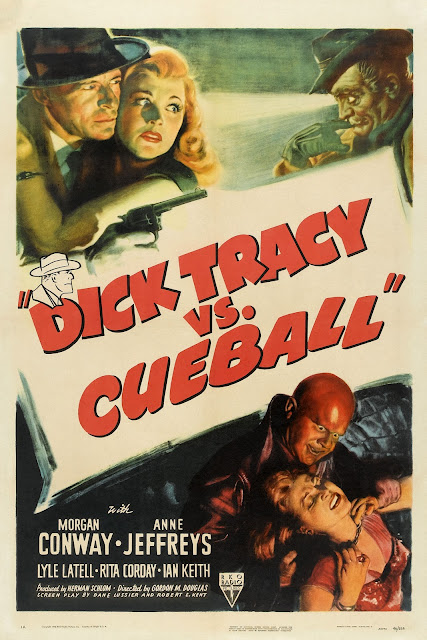 With an all-points bulletin it’s Burl, here to review another Dick Tracy VHS tape! You’ve already heard what I think of Dick Tracy’s Dilemma, and now, continuing to work completely out of order with this little series, I’ll provide you with thoughts on Dick Tracy vs. Cueball!

Here Dick is played by Morgan Conway, whom we know by his appearances in The Kid From Kokomo and other such pictures, and who also played the iron-nosed detective in the first Tracy picture (Dick Tracy, Detective), but not in the second two (Dilemma and Dick Tracy Meets Gruesome)! Anne Jeffreys from Clifford is the long-suffering Tess Trueheart, whose dinner dates with Dick are always interrupted by some crime or another – no Dick for Tess, ha ha! - but whom Tracy is happy to use casually as bait for the monstrous criminals he encounters!

The particular monster here of course is Cueball, who’s really just an ordinary thug with a baldness problem! He’s after some jewels and in league with some crooked jewelers, who realize they’re in over their heads when the glabrous hoodlum starts strangling people with his hat band! Dick and his pathetically incompetent sidekick Pat Patton, whose catch phrase is “It’s just a bump on the head,” are forever arriving just a little too late to save the victims or catch the killer slaphead, so the middle part of the picture gets a little bit repetitive!

But as we know from our Wodehouse, however murkily the clouds may seem to gather, a keen eye can usually discern the blue bird, ha ha, and such an eye can tell there are plenty of familiar Poverty Row mugs to appreciate in here! Singular performer Skelton Knaggs from The Scarlet Claw is present, as is Byron Foulger from Ridin’ on a Rainbow, and Milton Parsons from Another Thin Man; and then of course Esther Howard, who was in lots of Preston Sturges pictures, appears as Filthy Flora, owner of the grim waterfront dive The Dripping Dagger, with its great neon sign, scarfaced clientele, and hidden chambers! And lest we forget, Ian Keith from It Came From Beneath the Sea is here playing Vitamin Flintheart, just as he does also in Dilemma!

The picture is efficiently made by Gordon Douglas, who also directed Them!, and he gives the mise-en-scene just a little bit more pizazz than might be expected in a picture like this! Unfortunately Cueball himself is a bit of a dud – a dimwit with a corrugated forehead, limited dialogue, and no pep; and moreover he comes to a sticky end only through his own clumsiness and inattention! The detective work that puts Tracy finally onto the smoothpate’s trail is simple-minded and uninvolving, but at least it sort of gives Junior something to do, briefly, as well as Junior’s little buddy! And just who is Junior anyway, and why is he always hanging around? Ha ha, there’s a mystery Tracy never solves!

It’s another decent little crime picture, but not a memorable one! It’s got a car chase, and I always like seeing olde-tyme car chases, but it ends quickly thanks to Pat Patton’s terrible driving! Somehow Tracy never blames Pat for his endless blauchups, and I guess there’s something touching about Tracy’s great and endless patience for his friend’s non-stop boobery! So there are a few things I liked, and so I give Dick Tracy vs. Cueball two phones off the hook!