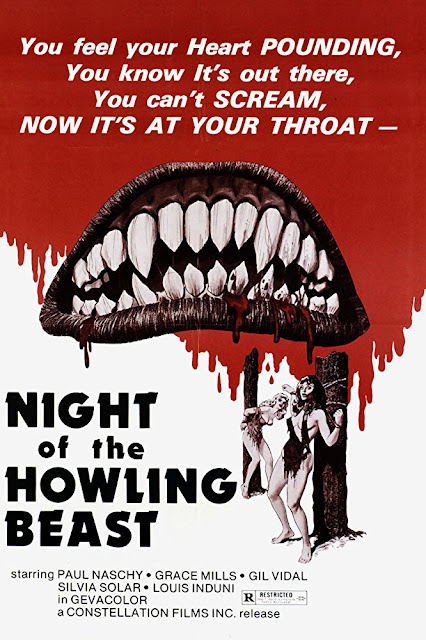 With a Spanish aroooo, it’s Burl, here to review some Iberian lycanthropy! Yes, ha ha, it’s our good and great friend Paul Naschy again, and here’s he’s playing his most beloved character, Waldemar Daninsky, just as he did in The Werewolf vs. the Vampire Woman, but didn’t in House of Psychotic Women! Poor Waldemar just can’t catch a break, and such is the case again in this picture, Night of the Howling Beast!

After an opening in which a gang of explorers in the Himalayas is attacked by a yeti who looks, sounds, and acts just like a werewolf, Waldemar is called in by The Professor to lead a follow-up expedition! He’s happy to do it, and happier still that The Professor’s comely daughter, and another beautiful science lady as well, will be participating! There are a few others in the party, including one fellow whose name is Lawrence Talbot, but who never comes close to becoming a werewolf himself, ha ha! No, he has to settle for merely being vertically impaled by Tatars midway through the picture!

On arriving in Nepal (played here by the Pyrénées), the party is split up, with Waldemar and the sketchy, perennially frightened local guide Joel heading off to find a pass through the snowy mountains! Joel runs off and Waldemar ends up in a cave inhabited by ladies who might be vampires or might be werewolves, but in any case they can’t keep their hands off the refrigerator physique of our hero, and this occasions much bum-wiggling sex! Once Waldemar realizes they’re flesh-eating creatures from beyond reality, he goes on an impaling jag; but before he can dispatch both ladies, one of them puts a chomping on his left tit! Ha ha, uh oh!

Now of course he’s a werewolf, and meanwhile the rest of the expedition is beset by the above-mentioned Tatars, who kill or kidnap everybody! Their leader, the Khan, has a skin condition on his back, and the witch in his employ is trying to remedy the ailment by peeling off other people’s backs and sticking it on the Khan’s! Yowch! Meanwhile there’s still a yeti, or yetis, running around, and Waldemar is periodically wolfing out, and what to do about these darn Tatars and their evil witch?

There’s a bit of a lull in the action around the middle of the picture while Waldemar and The Professor’s daughter hang out with a monk and his pal, but it’s nothing serious! There’s plenty going on at the Khan’s castle once Waldemar and the daughter arrive there, though! And the long-heralded battle between the yeti and the werewolf finally happens at the end, and it’s sometimes hard to tell one from the other!

As well, there’s time taken to give a happy ending in which the mystical flower is discovered by The Professor’s daughter right after the monster fight! Once she pushes a magic flower-blood combo into the werewolf’s toothy mouth, carefully, as you would, he reverse-pixilates into his Waldemar form and what’s more his wound seems to have healed! The last we see is the pair of them tromping off through the Himalayas in their leisurewear! Ha ha!

It’s pretty gnashy Naschy when all is said and done, and I enjoyed the picture, even if it gets a little sadistic here and there! Naschy didn’t himself direct this one, the better perhaps to direct his thespian attentions to the various ladies that want to “go ‘pon his bones for a touch of bohankie,” as they say! Yes, it’s solid Naschy, as solid as his own chest appears to be, and there's no doubt he knew just what his audience wanted to see, and gave it to them! Night of the Howling Beast is also known as The Werewolf and the Yeti, and by the end it earns that title, so I’ll give the picture two chomp marks!