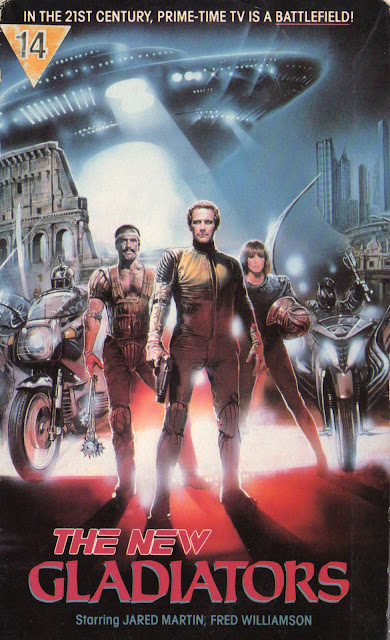 It's Burl roaring up to you on his customized dirt bike! Ha ha, I’m here to review an action picture by the famed Italian horror meister Lucio Fulci! Old Lucio was better known for his zombie pictures and, before those, his own crude takes on the giallo genre (The Lustful Duckling Winks Nine Times I believe is one of his!), but this futuristic effort takes him out of his comfort zone and puts him firmly in Death Race 2000 territory!
I guess technically The New Gladiators is meant as a cross between Death Race 2000, Rollerball, The Road Warrior and Blade Runner, but it most closely manages to rip off The Running Man, even though that movie hadn’t yet been made! And still it manages to get in some of Fulci’s trademark grue!
Ha ha, the year is 2072 and everybody likes violent TV! The best-loved show is a kind of jousting game called Kill Bike, but the popularity on that one is waning so the crafty, ratings-hungry robots that run the world decide they need an even bloodier game! Ha ha, they come up with The Battle of the Damned, which is also a motorcycle game, but played out by death-row convicts who have nothing left to lose!
A trio of whistling new-wave assassins set in motion a series of events designed to force Drake, the best dirt-bike warrior of the future, to take part in the games! Meanwhile Sam, the ruthlessly avuncular Big Brother type who runs all TV on the planet (or something!) has a nefarious agenda of his own! And then Fred Williamson shows up just like he did in Warriors of the Wasteland, here wearing an even more outlandish outfit!
I’ve got to say, this is a silly picture! But it sure is entertaining! The many shots of the futuristic cityscape, which are meant to look like Blade Runner but come off more like a particularly ambitious ad for model toys, get a lot of grief in the reviews, but I loved them! Sure they look fake, but there’s a strange beauty there and a conviction of its own effectiveness that carries the day! And there are many other visual tropes that give this picture its own special look – ha ha, why use a four-point star filter when a eight-point one will do!
As I mentioned, there’s lots of blood and gore, with dummies in white jumpsuits suffering many decapitations (remember Eye of the Tiger?) and impalings! There’s also a fellow with a melty face who reminded me of the Robert Joy character in George Romero’s Land of the Dead! (Maybe Romero thought “Ha ha, that Lucio has taken enough from me over the years, now I’m going to borrow something from him!”) But where this movie stumbles for this reviewer is in its action scenes! Ha ha, there are many more exciting ways to shoot motocross duels than what Fulci comes up with, that’s for sure! There’s no particular excitement, and the participants are all pretty anonymous in their jumpsuits and helmets anyway!
It’s too bad, because this could have been a modern classic of camp! It’s halfway there at least, so it’s certainly worth watching for the discerning viewer! I give The New Gladiators two magic palm-rays!
Posted by Burl at 14:13