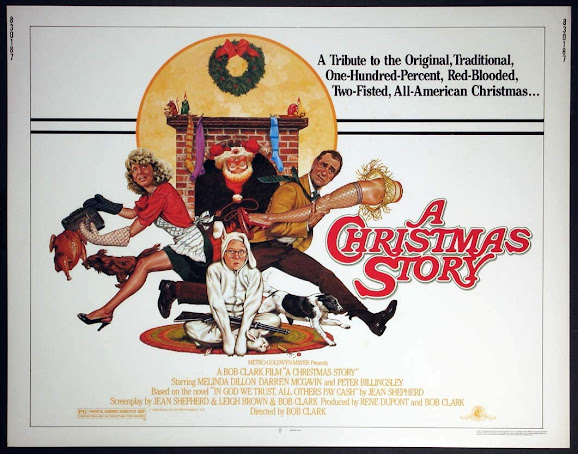 Ho ho, it’s Burl, here to review a seasonal classic for you! It’s a Christmas picture from Bob Clark, and I know what you’re thinking: Black Christmas, right? Ha ha, no! I’ve already reviewed that one! This is Bob’s other twinkle-light extravaganza, the well-beloved cornball nostalgia-comedy A Christmas Story!

You all know the story, because, ha ha, there is no story! Well, I suppose there is: a boy in 1940s Cleveland desperately wants a BB rifle for Christmas, but encounters resistance from all the authority figures around him, and even from Santa himself! Purfling the edges of this narrative are all the details of schoolboy life in a mid-century December: weirdly obsessive fathers, annoying little brothers, neighbourhood bullies, triple-dog dares among chums, radio giveaway gimmicks, and so forth!

Our hero is Ralphie, a bespectacled cherubim played by Peter Billingsley from Death Valley! It’s of critical importance that he convince his mom, played by Melinda Dillon from Staying Together, that the Red Ryder repeater is a necessary toy, and that there will be no accidental de-oculation! Dad, or rather The Old Man, is played by Darren McGavin from Raw Deal and Dead Heat, and indeed he is an old man, in fact perhaps a touch too old so to be playing this character; but then he does such a darn good job in the role that any such complaint is moot!

The Christmas season is ever-present, and all the attendant rituals are checked off: the buying of the tree, the visit to Santa and his elves! There’s a freewheeling structure reminiscent of Kenny and Co., and in many cases it’s the non holiday-specific segments which linger longest in the memory! Ha ha, the triple dog dare at the flagpole, for example, or Ralphie’s beatdown of the dreaded Scut Farkus, or his accidental cry of “Fudge!”, or, of course, the whole saga of the leg lamp! Ha ha, I need hardly go into further detail on these or any other episode in the picture, as it will no doubt be playing on a loop this Christmas day on some network or other!

This being in essence a Canadian movie, there are some familiar northland faces in the cast! Ralphie’s teacher, Miss Shields, is played by Tedde Moore whom we may recall from Rip-Off and Rolling Vengeance, and the Christmas tree man is none other than Les Carlson from Videodrome, The Dead Zone, and even some non-Cronenberg pictures! The whole thing has an appropriately fog-filtered Norman Rockwell look courtesy of cinematographer Reg Morris, who shot Bells and all sorts of other pictures!

I could have done without the Chinese restaurant scene at the end, or at least without the singing, but otherwise the movie goes down like a smooth nog! It’s funny here and heartwarming there, and sometimes it’s just there, playing on your TV, but it remains a repeatedly watchable holiday candy cane crunch, and I think, low-key as it is, Bob Clark really pulled something off here, and only a year after he made Porky’s too! I give A Christmas Story three strangled cries of “Notafinga!”