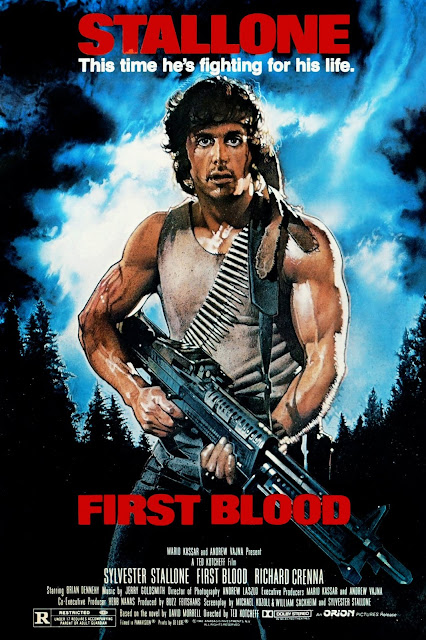 Ha ha and hambones, it’s Burl, here with a review of the good Rambo picture! Yes, that would be the first one, and its general solidity as a motion picture, especially as compared to the other entries in this series - ha ha, and in particular the last one, Rambo: Last Blood - is evinced by its title, which does not contain the name Rambo at all, but is the simple and succinct First Blood!

Sylvester Stallone, who later returned to the mountains in Cliffhanger, is as ever the star, the profoundly damaged Green Beret John Rambo! He’s out for a stroll, looking for an old army buddy, and is dismayed to find that his friend has died from the cancer, thanks of course to the Agent Orange he inhaled back in ‘Nam! Rambo then makes his way to a nearby mountain town and runs into a big bear of a sheriff played by Brian Dennehy from Ants! and F/X and Best Seller! Well, the next thing you know, the sheriff is power trippin’, Rambo is flashbackin’ to his wartime torture days, and deputies are a-flyin’ left and right and Rambo’s out the door and away into the mountains!

The scene with him beating up all the deputies is pretty satisfying, I must say, and later, when the meanest deputy of them all, played by Jack Starrett, who directed The Losers and Race with the Devil, plummets from a helicopter from which he’s shooting at Rambo, we get even more satisfaction! Then the whole gang of deputies is wounded by Rambo and his forest traps, and that’s pretty all right too! This gang of bozos is played by a gallery of familiar faces, like Bill McKinney from Cannonball, Chris Mulkey from Quiet Cool, Michael Talbott from Vacation, John McLiam from Sleeper, with good old Alf Humphries from My Bloody Valentine as the goofball cop and David Caruso from Without Warning as the nice-guy rookie!

But Dennehy’s Sheriff Teasle - ha ha! - is the biggest bozo of all, increasingly bent on getting the mumbly, misunderstood ex-soldier despite the fact that he, Teasle, was the one who started it by not letting Rambo eat lunch in his town! Richard Crenna from Summer Rental and Un Flic appears as Rambo’s old commander, and regales Dennehy with tales of the things Rambo could eat that would make a billy goat puke! Soon the National Guard is called in, and Rambo makes his way back to town and begins a campaign of gunfire and blowups! And despite the explosions and the flying bullets and the crashing cars, the only one who ever gets killed is that nasty deputy who fell from the helicopter!

It’s a fair action meller and a pleasantly cathartic exercise for viewers who are not much enamoured of the police forces in America! In that sense it’s a lot more relevant than the later Rambic exercises in commie-blasting, ha ha! It’s solidly directed by an old pro, and Rambo’s teary breakdown scene near the end is affecting! Plus, like Stallone’s later Cobra it’s a stealth Christmas picture, as evidenced by the sad desktop trees on view in the police station! I give First Blood two and a half grimy canvas ponchos!
Posted by Burl at 12:12