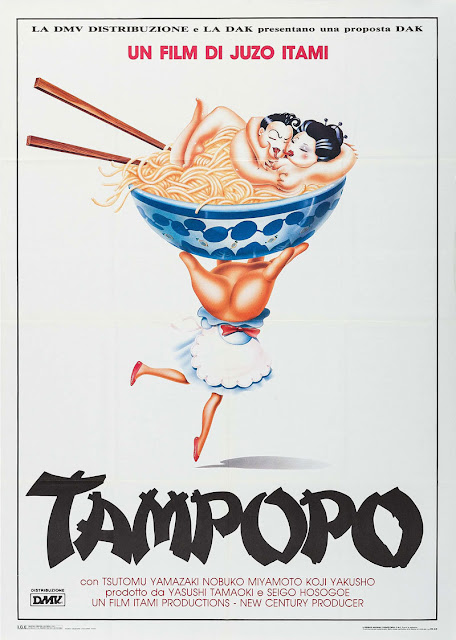 Noodle-slurpers, hello, it’s Burl! Ha ha, when I was a younger man, working in a video store in the late 80s and early 90s, there were certain movies of which I was aware, and which I knew were supposed to be good, but which were so ubiquitously on the shelves that they became a sort of wallpaper, and I never watched them! Many of these were the sort of 80s international or independent popular favourites that would have played in art houses to sweet acclaim - ha ha, I guess something like My Dinner With André or maybe Babette’s Feast would be other examples of this sort of movie! But the one I’m talking about today is quite simply Tampopo!

Well, I recently caught up with it, and while I’d always known is was a quirky film that mixed together genres the way its characters mix together broth, I wasn’t aware of just how eccentric and culturally specific it was! I found these elements quite delightful, and at times the episodic surreality of the thing reminded me a bit of something like Holy Motors!

And like Holy Motors, this is a movie that’s highly aware it’s a movie! Ha ha! It begins in a cinema, with a white-suited gangster type, played by Kôji Yakusho from such great Kiyoshi Kurosawa pictures as Cure and Charisma, who upbraids fellow patrons for eating noisy chips, and then discovers and addresses the camera to issue a similar admonishment and to talk about the autobiographical “movie” one sees of one’s life at the moment of death! Then the story proper begins: two truck drivers, one an older, taciturn cowboy Goro, played by Tsutomu Yamazaki, known for his appearances in such Kurosawa pictures as High and Low, the other a younger fellow in white called Gun, essayed by none other than Ken Watanabe from Godzilla, stop for ramen in a little restaurant run by a widow named Tampopo, played by Nobuko Miyamoto, the Taxing Woman herself!

But Tampopo’s ramen is unsatisfactory, and so Goro and Gun embark on a quest to help the flustered woman perfect her cooking and turn her struggling business into an all-time blockbuster of a noodle shop! As in The Magnificent Seven, or, more properly, The Seven Samurai, they gather together a group of experts, all men, to help not just with the ramen recipe but with renovating the shop and refining every detail of Tampopo’s hospitality strategy! Meanwhile Goro and Tampopo seem destined from the beginning to be together, but their budding romance is remarkably tentative!

Well, that’s the main tree trunk of the plot, but branching off it regularly throughout the picture are food-centric vignettes, sometimes involving the gangster in white, at other times featuring total strangers: a group of executives scandalized by their junior’s independence, for instance, or an old lady with pinchyfingers gone a-marketing! Some of these are moral tales, others fables, and sometimes they’re just filmed jokes in the manner of If You Don’t Stop It…. You’ll Go Blind!!! I must say I particularly liked a digression involving a gang of hobo gastronomes, and I think you’ll like that bit of the movie too!

With the exception of a scene showing the slaughter of a turtle, which I most certainly didn’t like, it’s mostly a very delightful a study of kindness and generosity between humans! But it has some sharp edges too, along with punchfights, low-key pictorial beauty, and a touch of bohankie too, making it in sum a good, heady brew of noodles and broth! The attention paid to detail, and the gorgeousness of the comestibles on view add still further to the pleasures of the whole! Ha ha, it’s an invigorating filmic experience, and I give Tampopo three shared egg yolks!