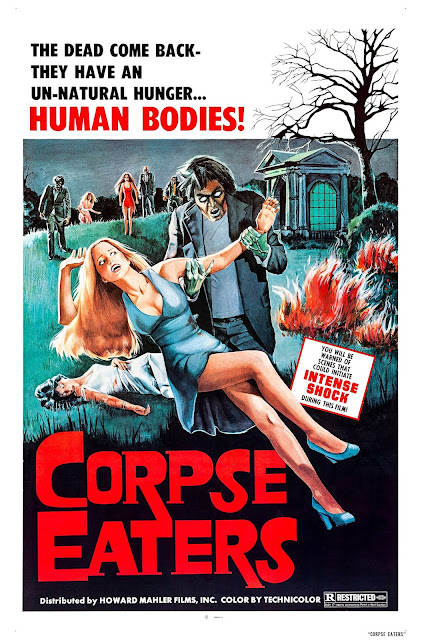 Ha ha, I’m not crazy, I’m no-o-o-ot! No, ha ha, I’m Burl, here with a movie review that might make you think I am crazy! But, just as a character in the movie itself screechily claims at the end of the picture, I’m not! I'm no-o-o-ot! The movie is real, and it is called Corpse Eaters!

This is one of those little regional zombie pictures of the early 1970s, very much in the same category as something like Garden of the Dead or Children Shouldn’t Play With Dead Things! For that matter, I guess it’s a pretty direct, if badly mutated, offspring of Night of the Living Dead, itself a penny-poor regional zombie picture, but one pulled off with a lot more professionalism and flair than Corpse Eaters! Ha ha! But I certainly don’t mean to imply that Corpse Eaters is entirely lacking in charm and zombie interest - no sir, it most certainly has a measure of that!

The story takes place somewhere near the mining community of Sudbury, Ontario, and features characters with Canadian accents so thick they sound Irish! Initial scenes are set at the Happy Halo Funeral Home, where a scruffy old grump runs the show, but doesn’t think much of his customers! He seems to have a real grudge against dead people in fact, which is bad, because he works with them every day! In any case, a mustachioed corpse comes in who needs some special facial reconstruction work done, and as his mortician gets to work, the Happy Halo owner strolls around his boneyard, musing nasty thoughts in voice-over!

Ha ha, dissolve to the lake, and to a little hard-boating action! A little gang of pals, including Ritchie (whom I didn’t realize until later was the corpse delivered to the Happy Halo in the opening scenes), zoom about in their watercraft, then repair to the shore to guzzle a little Molson Ex and engage in bohankie! Well, one of the couples does at least, which is to say Ritchie and his good-time gal Julie; the other pair, a fiveheaded hoser called Alan and his perpetually grouchy girlfriend Lisa, can only watch this sloppy, beer-soaked bohankie from the sidelines! Before too long, and over the strenuous, and as it turns out, well-justified objections of Lisa, the quartet end up in a remote graveyard, hiding from the rain in a handy crypt!

Ritchie is keen on enacting a satanic ritual he learned from his uncle, and this is where it all goes pear-shaped! Zombies unearth themselves and come to put a biting on the foursome! Julie is quickly overwhelmed and the flaky-skinned cadavers have a good old belly-munch; Ritchie, the fool who caused it all with his hocus-pocus and mumbo-jumbo, catches a heavy biting, and the other two drag him to the car (a Challenger or a Cougar from about 1970 - I couldn’t tell which in the grainy 16mm murk, but it was sure sweet!) and drive him to the hospital! Ha ha! But nothing the medicos do can help Richie, and he ends up at the Happy Halo, as Lisa meanwhile endures terrible zombie nightmares and is consoled in the most jerkish, responsibility-dodging manner possible by the gormless Alan!

The Happy Halo man, deep in his cups, is startled by noises, and when he sees a zombie pulling out a guy’s eyeballs, his mind simply snaps! There’s no real conclusion to the story save the funeral home director being roughed up by orderlies (and, charmingly, you can actually hear one of the actors apologize during this scene - ha ha someone must have accidentally stepped on someone else's foot) and left in a room all strait-jacketed up and howling that he’s not crazy! He’s no-o-o-ot!

Well, after 57 minutes of crude but heartfelt Sudbury moviemaking, the picture ends with the viewer’s goodwill intact! Ha ha, that’s an achievement in itself, and one worth celebrating! Corpse Eaters is not a film for everyone, and the little gimmick of the warning siren and the barfing man, meant to signal an upcoming sequence of grotesque and sickening gore, is not required for those who might be enthusiastic to make its acquaintance! If it’s a diamond in the rough, there’s an awful lot of rough, but those who might appreciate it most definitely will! Ha ha! I give Corpse Eaters two Evinrude outboards!