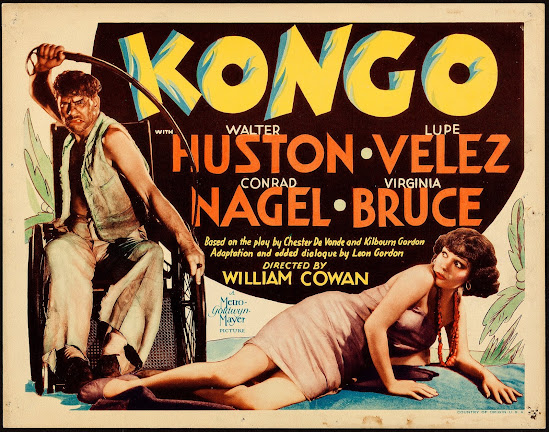 Ha ha and houndstooth, it’s Burl, here to review a bit of pre-code nastiness that plays like Freaks meets Island of Lost Souls meets The Most Dangerous Game! It’s not quite the firecracker that combo makes it sound like - ha ha, it’s too stagey for that - but it frequently comes close! Anyway, it’s lurid, and the name of the picture is Kongo!

It’s a remake of West of Zanzibar, the Lon Chaney silent jungle extravaganza in which he plays a stratospherically nasty jungle kingpin known alternately as Flint and Dead Legs! Like The Penalty, which it strongly resembles, it was an opportunity for Chaney to play a paraplegic who never lets his disability get in the way of his psychotically sadistic behavior! But for the talkie version the filmmakers went for Walter Huston, both because he had already played the part of Dead Legs on stage, and because Chaney was, after all, dead! Huston is not quite as spectacularly demonstrative in the physical aspects of the part, but he does a fine job of crawling around on the floor, lifting himself into his wheelchair, or pulling himself up a knotted rope to his grimy roost in the ceiling!

I’ll back up a bit and give you the plot! Somewhere in deepest Africa, the crippled Flint has set up his palace of torment, where he keeps various sad-sacks in his thrall and from which he manipulates the local people by baffling their minds with parlour tricks! (Needless to say the movie is packed with colonialist racism, with the idea that the indigenous population would be so easily fooled and controlled being only the beginning of it!) His ragtag bunch includes a Portuguese firecracker played by Lupe Velez, a pair of dumbbells who wait on him, and eventually, as part of a long-game revenge plan later echoed in Oldboy, the convent-raised daughter of the man who originally caused his disability with a flurry of kicks to the back! This daughter, Ann, has been brought up in circumstances of absolute purity, and then at Flint’s behest is lured first into servitude in a Zanzibar brothel, and then to Flint’s compound where she is debased and diseased and kept prisoner!

Into this hellish situation stumbles a junkie doctor, Kingsland, whose addiction to some kind of jungle root is cured with swamp leeches! He becomes determined to rescue Ann (who is very well played by Virginia Bruce, it ought to be said), but matters are complicated by the arrival of her ostensible dad, who is also Flint’s greatest enemy and the real object of his vengeance plan! Certain native burial customs further heat up the situation, and a man called Fuzzy plays his part as well! Redemption and escape are in the cards, but hardly guaranteed!

Ha ha, this is a compelling picture if not the feel-good frivolity of the year! I suppose during the depression, before the Production Code came in anyway, movies could opt either to lift the spirits of audiences by presenting happy fantasies, or else make the real-life situation seem easier by presenting a twisted, corrupt, horrific vision of hell on earth! That’s the route taken by Kongo, ha ha! And while it certainly betrays its roots as a stage production, and doesn’t manage to convincingly present its jungle setting, the movie whips up a bleak atmosphere rarely matched in Hollywood and gets plenty of additional power from Huston’s relentlessly mean performance!

Kongo is imperfect, but still a little jungle horror gem, and I recommend giving it a look if you think you can take it! I give the picture three raggedy chimpanzee sidekicks!