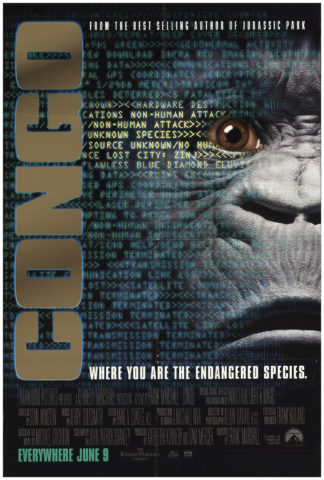 Burl here, going ape again! And believe me, the movie I’m reviewing today has a lot of ape in it! Gorilla after gorilla in fact, whole swarms of them! No, we’re not talking about Greystoke or Gorillas in the Mist, and we’ve already talked about Link! No, the picture in question is Congo, the monkey mash from the mid-90s that I recall seeing in the theater and even reviewing! My old review is around somewhere, but this one is all new, ha ha, and is moreover based on a very recent re-viewing of the picture!

There’s trouble in Africa! Colonialindustrialists are searching for rare purity diamonds with which to power their lasers, but their expedition is interrupted by simian viciousness of some kind! Meanwhile a vanilla primatologist and his lily-livered pal are planning to return their pet talking ape to the wild, and they are joined by the lady from the tech company who wants to find both the diamonds and her missing ex-fiancé who was on the original diamond quest! It’s a rather charmingly old-fashioned set up, straight out of Allan Quartermain and the Lost City of Gold, gussied up with 90s technology!

There are so many apes, they can be divided into subcategories! We have our hero ape, Amy, who wears a contraption that turns her hand signals into spoken speech; and then there’s a group of regular mountain gorillas; and of course there are the mutant white apes, straight out of White Pongo, but uglier, who are the real plot drivers here! By the end there are seemingly dozens of pongos, all warty-faced, jumping on the secondary characters like they were luggage! But speaking of human characters, the leads are not the most interesting bunch of people! The scientist fellow makes little to no impression, his buddy is a darn pest, and the tech company lady, although played by the good actor Laura Linney, doesn’t fare much better! Linney never really gets a handle on her character, because there isn’t much to get a handle on, ha ha! She must at different points be a cynical executive and a die-hard romantic, a hardy adventuress and a humourless scold, a tough Linda Hamilton type and a damsel in distress; and so it’s a wonder to me that Linney could pull together anything at all!

The cast gets more interesting as you go down the billing! Ernie Hudson from Ghostbusters is particularly good as the gentleman scoundrel safari leader; Tim Curry from The Hunt for Red October does a double ham on rye; and Joe Don Baker from Joysticks gets to kill a TV with a golf club! And, ha ha, there’s more! Bruce Campbell from Army of Darkness shows up at the very beginning, not proving as resilient here as he is in the Evil Dead pictures! And a parade of familiar faces follows: Joe Pantoliano from The Mean Season and Delroy Lindo from The Core show up in quick succession, and sprinkled throughout are appearances from Peter Jason of Prince of Darkness; James Karen from Time Walker; John Hawkes from Future-Kill; and even Jimmy Buffett of Jurassic World fame! Ha ha, the Buff plays an airplane pilot who bails out of his craft and we never see him again! I’ll bet you could make a whole other movie just about his adventures after landing in the jungle in a country in civil war into which he has flown illegally! Buff On the Run, we could call it, or War On Buffett! Ha ha!

But really it’s about ape action, and there’s a lot of it towards the end! The gnarly-faced ‘rillas make jolly adversaries, and it’s almost sad to see them falling into lava by the properly Edgar Rice Burroughs/ H. Rider Haggard erupting-volcano climax! The movie is a slick studio product, dumb as a bag of hammers, curiously old-fashioned, and largely enjoyable! And if you like fake apes, this is your movie! It’s got a lot of ‘em, pretty well done but maybe just a notch below the best Rick Baker work! Anyway, I give Congo two sesame cakes! Ha ha, put down my sesame cake!