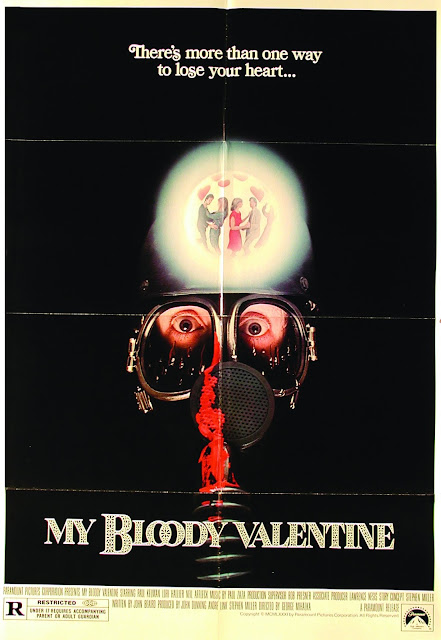 A belated happy Valentine’s Day to you, from Burl! Ha ha, no, the truth is that I don’t celebrate the holiday much, it being mainly an occasion for selling cards and flowers! But one semi-regular mid-February tradition I hold is watching the Can-horror classic My Bloody Valentine, and this year I honoured that tradition for the first time in a long while!
I’ve always enjoyed this picture, even if it’s not all that good by normal movie standards! It slouches apart from most other slasher movies of the era, however (yes, even Hospital Massacre, the other Valentine's Day slasher, which came out the same year), and that perhaps makes it seem better than it actually is! But illusion is all in the movies, ha ha, and so I contend that not only does it seem better than it is, it is better than it is! Ha ha, make some sense of that one if you can!
My Bloody Valentine is of course the story of a small Nova Scotia coal town, precisely the sort of place Pete and Joey came from in Goin’ Down the Road, and most of our characters are young adults who work in the mines, or their girlfriends! It seems the town, being called Valentine Bluffs, is obsessed with Valentine’s Day, but have had to curtail their V-Day activities these past twenty years because of a mining accident, a little cannibalism and a homicidal rampage by the notorious Harry Warden! But by now enough time has passed, figures the town, and it’s time to rekindle traditions and hold the big heart-shaped dance again!
Well, somebody, maybe Harry Warden himself, doesn’t like this idea much, and the pick-axe pokings begin anew! Meanwhile, there’s some good old-fashioned Maritime drama, principally in the form of a love triangle between Axel, Sarah, and the freshly-returned T.J.! Like Pete and Joey a decade earlier, T.J. had seen the blessed vision: Cape Breton in the rear-view mirror! But after "falling on his ass out there," he'd returned, gone back to work in the mine, and rekindled his love for Sarah! This leads to shout-downs and punch-ups and the drinking of Moosehead beer in quantity, and choruses of heavy if synthetic Nova Scotia accents!
Outside of the central romantic isosceles, there is a gallery of familiar Canadian faces in the cast! Keith Knight, Fink from Meatballs, plays the heaviest-set of the miners; Alf Humphreys from Funeral Home is the goofy jokester; Helene Udy from Incubus suffers the indignity of becoming a shower; Don Francks from Fast Company is the town sheriff, whose pipe droops in dismay when he realizes his town is beset by a maniac; and Jack Van Evera from Black Christmas plays the doom-crying bartender, inaptly named Happy! Ha ha!
With its ever-present Moosehead beer, windswept cliffside drama scenes, drab sets and bar fights, My Bloody Valentine sporadically recalls the classic Canadian Loser pictures of the 1970s, and one looks in vain for Gordon Pinsent or Donnelly Rhodes passing by in the background! And mixed in with this, like peanut butter with chocolate, are some of the finest pokings ever filmed in the 80s slasher boom! There are Special Makeup Effects out the wazoo (if you watch the uncut version, that is), and the poetry-writing killer, though not deformed (ha ha, until the end) is a particularly sadistic character in the tradition of the bozo in The Deadly Intruder!
Its shortcomings (paint-by-numbers script, occasionally dodgy staging, inconsistent performances) are so obvious as to not be worth mentioning or worrying about; its virtues, specifically that beautifully incongruous swirl of dishwater drama and high impact slaughter, are more singular and therefore more important! I give My Bloody Valentine three bottles of Moosehead beer!