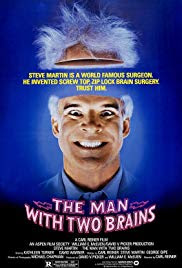 Ha ha and Hfuhruhurr! Yes, Burl is here to review a comedic picture of days gone by, the Steve Martin thunderstroke The Man With Two Brains! Ha ha, I fondly recall going to see it in the theatre when I was a lad, thinking it was hilarious, and marveling at what seemed to me then a copious number of nude ladyparts! Today it seems a lot tamer, but I can tell you, back in 1983 my friends and I felt like some real gone cats, true sophisticates taking in a real adult comedy! Ha ha!
Now, this was the third of four pictures Martin made with Carl Reiner! I was fond of The Jerk and Dead Men Don’t Wear Plaid also, and enjoyed All of Me when I finally caught up with it on home video! Ha ha, those guys had a pretty good batting average, but they probably went their separate ways at about the right time, so Martin could make lollygogs like The Lonely Guy and ¡Three Amigos!, and Reiner could go off and make Summer Rental and Summer School!
The Man With Two Brains has the wild and crazy actor playing Dr. Michael Hfuhruhurr, a brilliant brain surgeon, sadly widowered! He spends all of his time either doing screw-top brain operations and correcting the pronunciation of his surname - he does so with especial energy when an excited journalist calls him “Dr. Furrea!” - until the day he knocks his car into a venal gold digger played by Kathleen Turner, well known for her role in Crimes of Passion!
He marries her, but finds, ha ha, trouble in the bedroom! A European honeymoon puts Hfuhruhurr in touch with a mad condo scientist played by David Warner from Nightwing, who has a collection of brains and a special machine to implant their thoughts into another body! Of course our doctor falls in love with a ladybrain, and because his corporeal wife is so horrible, and taking money in return for bumsqueezins on the side, he decides he must enact a change!
Ha ha, can you believe this movie was photographed by Michael Chapman, the same fellow who shot Taxi Driver and Raging Bull? It’s lit like a TV show! That curiosity aside, I still find much of the picture amusing, even if I sometimes wish there was more pep in the filmmaking! There are good gags, which I won’t ruin for you here, and it’s not afraid to get a little weird! Plus Jeffrey Combs shows up as a brain doctor again, in practice for Re-Animator I guess! Ha ha! Roger Ebert famously decried the use of funny names as a source of comedy, but it sort of works here, because the long hard-to-spell names help form a connection between the movie’s lovers! (The voice of the ladybrain, as everyone knows, is Sissy Spacek!)
I’ll never enjoy the picture as much as I did in the theatre when I was 12, but it still has the power of laffs, if you let it weave its tendrils into your brain! The astonishing little girl who repeats back Hfuhruhurr’s complicated medical instructions is worth the price of admission on her own, ha ha! I give The Man With Two Brains two and a half Catalina Magdalena Lupensteiner Wallabeiner songs!