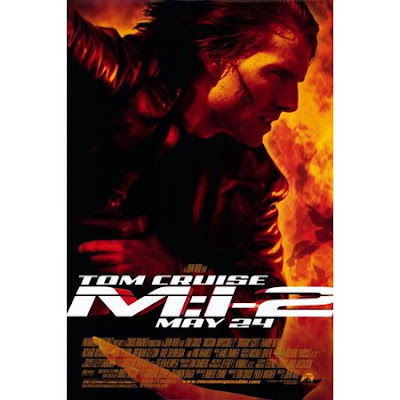 Ha ha and sportscars, it’s Burl here, reviewing a John Woo picture I don’t think about very often! It’s called Mission Impossible 2, and, well, I’ll say it up front: it’s not very good! Certainly I would say it’s the weakest of this series of actionblasters!
But they’re not strictly actionblasters, are they! No, these are spy pictures, and by design are meant to have as many whispered conversations and meetings with the boss as they do car chases and wild stunt-leaps! So John Woo, a director of uncommon technical skill, may not have been the man to hire for this one, as his heart just doesn’t seem to be in the non-action material! Maybe there was studio interference involved - ha ha, there usually seemed to be on Woo's American pictures!
Here we have that Tom “Edge of Tomorrow” Cruise again, not the clean cut teen agent he was in Brian De Palma’s opening installment but now a longhair who likes free climbing cliff faces! Ha ha, his employers - personified here by Anthony Hopkins for some reason - send him a message by sunglasses and soon he’s on the case again, chasing a rather generic bad guy, a rogue agent who will unleash a deadly viral plague upon the world unless he is paid - now get this - £37 million! Ha ha, calling Dr. Evil! I have a feeling the countries of the world would get together to pay this strangely modest and specific sum rather than send out their best agent on a risky, nay impossible, mission!
But be that as it may, Ethan Hunt, mister spy boy, is on the case! Not only must he face down the rogue agent, but his lieutenant, who is depicted, if I read the performance right, as sporting a powerful if resentment-frosted crush on his boss! That touch somehow seems borrowed from the Hong Kong action movie casebook, though I can’t remember where exactly I saw the dynamic before! Ha ha, maybe in Last Hurrah for Chivalry! Hunt must also sneak in somewhere to steal something, as he so often must, and he's also asked to dodge an awful lot of pigeons!
At any rate, the action scenes here, replete with Woo-ian touches as they are, bat about .500 for me! The script, by Robert Towne of all people (though based on a story written by others), salts in a bit of Churchillian sexism for Hopkins to excrete for no particular reason except maybe that Towne was arguing with his wife that week! There’s a sort of deflated quality to the story, and meanwhile, like visits to the stations of the cross, the narrative dutifully brings us at intervals to a point where Cruise can ride a motorcycle through an explosion or something along that line! It’s all decidedly ho-hum!
Things improved after this one, though not mightily, with Mission Impossible III, then hit a higher level of entertainment with the next three installments! The fact is, except for some goofy transitions and all those birds, this picture is pretty machine-tooled, and doesn’t have a tenth the appeal of something like Hard Boiled! I give Mission Impossible II one and a half flapping birds!
Posted by Burl at 23:39