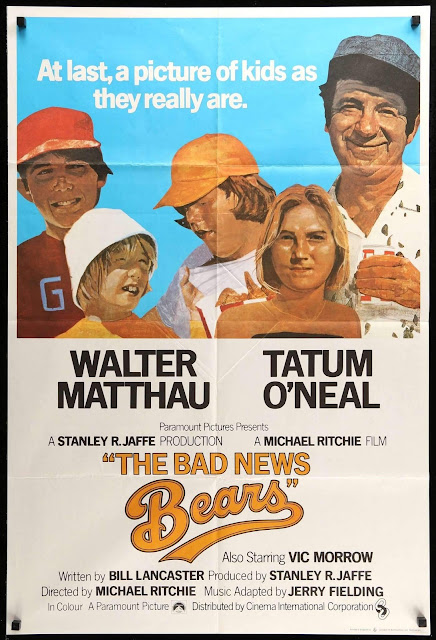 Ha ha, everybody, play Burl! I mean, play ball! I’m Burl! And I’m here to review a baseball picture, one of the best of them for my money! No, it’s not Fear Strikes Out! Or The Natural! In fact it’s The Bad News Bears!
Now, this isn’t the remake I’m jabbering on about! Ha ha, I’ve never even seen that! This is the original with the foul-mouthed kids; the picture that promised, as its posters said, to show Kids As They Really Are! Does it? Well, I saw this movie at the age of five or six, and I remember thinking they were really sophisticated and funny kids! Ha ha, and they fell down a lot, crashing into each other chasing a pop fly, and the ball dropping in the midst of their feet as they lie splayed out and prone! And it all took place to the strains of classical music for some reason! Anyway, those were the memories of the picture I carried for years, full stop!
When I started to appreciate Michael Ritchie for his talents beyond Fletch and The Island, I began to see the picture in a different light! This, I realized, was one of a series of Ritchie films criticizing specifically American culture and competition, circling around Little League baseball the way Smile revolves around beauty pageants! Hal Ashby was sort of doing the same thing around this time, and so I’ve always grouped the two directors together in my mind!

Walter Matthau, well known from Bigger Than Life and the Grumpy Old Men pictures, is Buttermaker, the coach of the Bears, a pool cleaner and ex-ballplayer, and a dipsomaniac of the highest order! Perhaps only Albert Finney in Under the Volcano outpaces him drink for drink, ha ha! The kids in his charge, played by the likes of Alfred Lutter (from Alice Doesn’t Live Here Anymore) and Gary Lee Cavagnaro (from Drive-In), and eventually Tatum O’Neal from Little Darlings and Jackie Earle Haley from Damnation Alley, seem to have no illusions about Buttermaker, but we are confident that he will finally rise to the occasion! And he does, by not rising but more sort of just slumping down! And he doesn’t give any big speech about it either!
That’s what I liked most about the script by Bill Lancaster (Burt’s son, who also wrote The Thing): the speeches are infrequent and all in the right places, not necessarily the expected places! Things are kept simple, too - no conspiracies or double-dealings at city hall, and a bad guy who’s one of the most realistic, and therefore both simple and complicated, in popular film!
Vic Morrow from Curse of the Black Widow, playing the hard-case father who wallops his own son in front of a crowd, is as good as I’ve ever seen him! Ben Piazza from Nightwing is the city councilor who presses Buttermaker into service and pays him on the sly, and Joyce Van Patten simply plays Cleveland! Matthau too gives an excellent performance, and none of the kids let the side down either!
The movie is funny and charming and all of that, and shambling and a bit repetitive too, but the nice Hollywood-natural atmosphere, the simplicity and specificity of the script (the movie rarely strays far from the diamond) and the convincing baseball scenes all add up to goodness! I give The Bad News Bears three and a half chocolate-covered balls!
Posted by Burl at 23:41

Email ThisBlogThis!Share to TwitterShare to FacebookShare to Pinterest
Labels: 1970s, comedy, kids, saw it on the big screen, sports