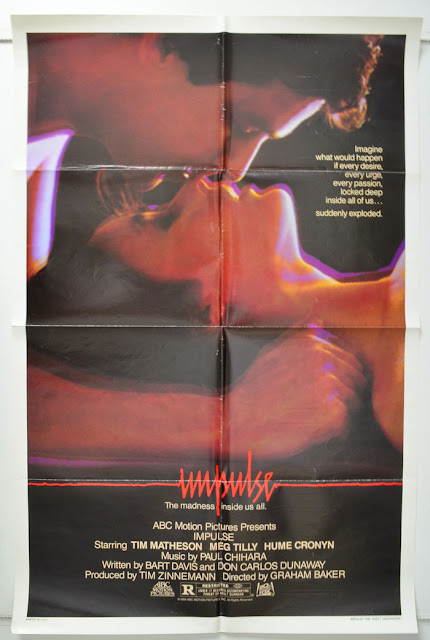 With a courtly bow, it’s Burl, here with another picture for review! This one, Impulse, falls into a microgenre I’ve seen quite a few examples of over the years: Toxic Spill Terror! This subset is populated by pictures like George Romero’s The Crazies (and the not-that-bad remake), Mutant, Warning Sign, Nightmare at Noon (which not only tells the same story as Mutant, but uses the same cast, ha ha!) and Search and Destroy! There’s usually a government conspiracy woven in, and very frequently soldiers in hazmat suits appear in the third act!
Well, Impulse is a pretty low-key variant on this theme, and a peculiarly effective one too! Big-city couple Meg Tilley from Psycho II and Tim Matheson from Fletch, a dancer and a doctor respectively, are drawn back to Tilly’s Midwestern hometown after she receives an abusive telephone call from her formerly (we presume) sainted mother, who then goes on to shoot herself non-fatally in the head! What they don’t know is that the town just had an earthquake, a little one, ha ha, but big enough to rupture some kind of concrete bunker and allow a suspicious-looking liquid to trickle from it!
Tilly and Matheson meet the kindly town doctor, played by Hume Cronyn of Brewster’s Millions fame, and there’s a lot of talk about changing bedpans! Tilly’s father, played by John Karlen from Gimme an F, seems like an okay guy, a little surly and suspicious maybe; but her brother is played by Bill Paxton as a provincial weirdo, just like he was in Mortuary!
Everyone in town starts acting weirder and weirder, ha ha, engaging in all the behavior they’d previously have suppressed! There are eruptions of rudeness, passion and violence; Tilly’s former best friend becomes first moody and then maniacally resentful, while her children lock Tilly in the garage and try to barbeque her up! The sheriff, played by Claude Earl Jones from I Wanna Hold Your Hand – he’s not actually the brother of James Earl Jones, it would appear – grabs his machine gun and starts blasting petty criminals, which I have no problem believing is the true impulse of many a law enforcement officer, or dude with a gun for that matter! The most disturbing of all is Cronyn’s journey from compassionate clinician to grinning murderer: the kindly country doctor is supposed to be one of our most inviolate archetypes!
Things get darker and darker, and it doesn’t look like there’ll be much of a happy ending! Spoiler alert: there isn’t! The conspiracy angle raises its head, though there are no fellows in hazmat suits – it’s just good old Peter Jason, the familiar face from They Live and so many other pictures, driving around in his truck and peering through binoculars! Finally a solution is arrived at, but not one likely to make anyone in the town very happy, ha ha!
It’s a movie stuck firmly in the realm of “ha ha, not bad!” But Tilly and the rest of the cast, particularly Cronyn, are fine, and the lines they are asked to read are competently written! It’s true that there are silly bits: like Springfield, this is one of those towns you can only enter or leave by a single bridge! And this may just be a lapse in my own memory, but did they ever show us what happened with Bill Paxton? Anyway, though I can think of a thousand ways in which it could be better, the Impulse we have is probably the Impulse we need, and I’m going to give it two broken fingers! Ha ha, ouch!
Posted by Burl at 00:34