Burl reviews The Little Girl Who Lives Down the Lane! (1976) 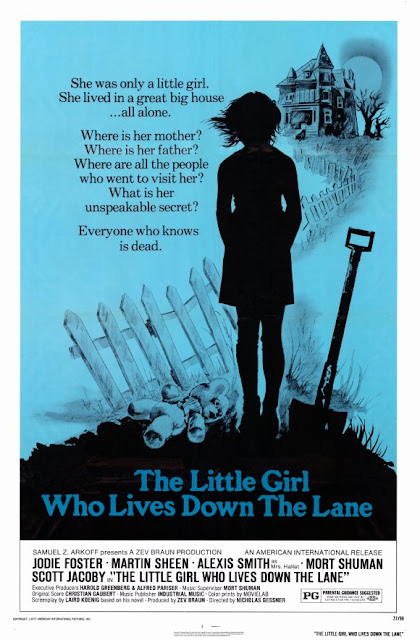 Ha ha, I’m Burl and this is my house! So, welcome! Yes, today I wanted to tell you about The Little Girl Who Lives Down the Lane – no, not a real little girl living down an actual lane, but the movie by that name featuring a young Jodie Foster as the little girl of the title!
Foster, whom we know from her one-two punch that is Taxi Driver and Freaky Friday (both released the same year as this one – what a year!) plays Rynn, the preternaturally assured 13 year-old who lives in a big house with her father – but whenever people drop by the house, and they do so frequently, the father is always out, or working, or having his nap!
Droppers-by include the nasty lady who owns the house (Rynn and her absent father have it on a three-year lease), and, separately, her son, a slimy molester type played by Martin Sheen from The Dead Zone! A friendly cop played by Viva Las Vegas co-songwriter Mort Shuman is a frequent, increasingly suspicious visitor, and his nephew, Mario the Magician, played by Scott Jacoby from The Supernaturals, pops by as well, but becomes a friend, ally and, eventually, lover to the just-barely-teenaged girl!
So just what’s going on with all this mystery and malarkey? Well, Rynn is extremely disinclined to allow anybody down cellar, so that should give you a clue! Is daddy down there? Well, maybe and maybe not! Someone certainly is, and slowly but surely, more people go down there to join them! Ha ha, we ourselves never get a look at the cellar, except for a few quick glimpses down the hatchway!
The movie is largely made up of scenes in which Rynn fends off the inquiries of these visitors, and while they’re effective and well-acted (particularly on the part of the extraordinary Foster), they’re also repetitive and stagy! Never has a movie not based on a play seemed more like a movie based on a play, ha ha; or at least never since the heyday of Roger Corman three-day wonders like A Bucket of Blood!
It’s nevertheless compelling and atmospheric! The setting is a small Maine village in late autumn/early winter, so the atmospherics are mostly built in! It’s not a horror movie, though horrific things happen and there is one genuinely spooky scene! (So, ha ha, maybe it is a horror movie after all!) Those expecting a murder-fest, or eventfulness, or pep, or conclusive endings, will come away disappointed; but devotees of highly controlled child performances will be quite satisfied! A warning to hamster lovers, however: you will be truly shocked and dismayed!
It’s a strange little chamber piece, and if you watch it in the right company, you’ll have a good time! The holes in Rynn's plan quickly become apparent, and it does appear that her poet father might have been a bit damaged himself, but the situation takes on a certain elegance when viewed in its totality, and that, along with Foster, mght be the picture's greatest asset! Ha ha! It takes a while for the child molester/hamster killer to get his, but be patient, because eventually he does and it’s quite satisfying! I give The Little Girl Who Lives Down the Lane two bumping trapdoors!
Posted by Burl at 12:25