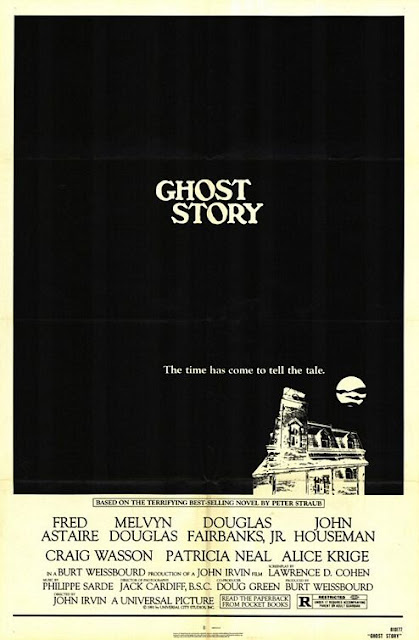 Boo to you, and you, and you too: it’s Burl, here to review a ghost story by the name of Ghost Story! Ha ha, I have a long history with this picture, having first seen it several times at my neighbourhood cinema on its original December, 1981 release! I was too young to be seeing movies of this sort, probably, but I loved it, and took friends equally too young along with me for my repeat viewings! (I only got around to reading the Peter Straub book some time later, but I recall liking that too!)
Later I met, worked with and even had dinner with the lady at the center of the ghostly doings, the lovely Alice Krige! This was years later but she was as radiant as ever, and told me many stories from the set of Ghost Story, particularly about the quartet of superannuated thespians who were her co-stars! Boy, she loved those old jaspers! And moreover, I’ve spent some time in the little Vermont town which served as its primary location, and on many an occasion crossed the bridge from which she scares one of the old ducks to his doom! 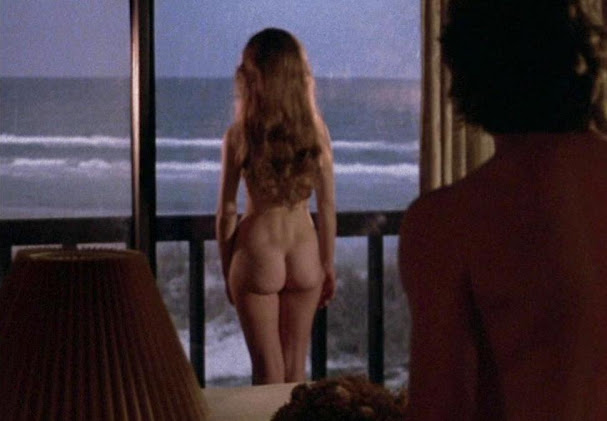 So this picture, whatever one’s opinions of its quality, is woven into me somewhat, and glimpsing the poster in my viewing of Six Weeks inspired me to give it a spin once again! The quartet of elderlies referenced earlier, known as the Chowder Society, consists of Fred Astaire, whom we know from Top Hat and The Towering Inferno; John Houseman, whom we know from Bells, and who opens this picture by telling as spooky tale just as he did in The Fog; Melvyn Douglas, who was in many interesting pictures, like Being There and The Changeling and The Tenant; and Douglas Fairbanks Jr., who was in plenty of movies all through the ages!
These duffers tell each other eerie tales every month, then sip their brandy! But there’s one scary tale they won’t breathe a word of, because it happened to them, ha ha, and they feel pretty bad about it too! Craig Wasson from A Nightmare on Elm Street 3 appears as a moustacheman who takes a flopper out a high-rise window when his nude ladyfriend says boo to him; we next meet the moustacheman’s brother, a clean-shaven version also played by Wasson, who arrives in the little Vermont town to get to the bottom of things! But the old tartans start dying too, each of them with the dickens literally scared out of them by, you guessed it, a sinister ladyghost saying boo and turning her horrible face upon them! Ha ha, you might call these boo scenes a bit repetitive, but it gives us a chance to see the work of the great makeup trickster Dick Smith, so I myself certainly don’t mind! It’s just too bad we didn’t get to see this particular one, which he made for the film but which went unused, maybe because it was just too darn scary! 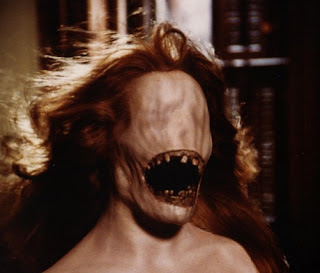 Ha ha, spooky! Anyway, stories are exchanged, and the ladyghost is of course a vengeful spirit whose vanquishing turns out to be a reasonably simple affair! In fact the whole movie, particularly when compared to the book, has a dumb simplicity to it, a feeling of interesting backstories, subplots and expanded scenes lurking around the margins but never shown! The ghost has a couple of helpers, a toque-wearing fellow played by Miguel Fernandes from Spasms and his little dress-wearing kid-buddy, whose presence is nearly inexplicable! Ha ha, if so much was going to be cut out of the story, they might at least have chosen an elegant simplicity rather than a forced and imperfect one!
There are a few ladies haunting the margins as well, like Patricia Neal from Happy Mother’s Day, Love George and Jacqueline Brooks from Last Embrace, but they don’t get much to do besides scold! On the other hand, the movie is determinedly classy, with terrific photography from the great Jack “The African Queen” Cardiff and a truly stellar musical score! It looks great, the old guys have a terrific presence, Krige is magnetic and the New England smalltown atmosphere is exemplary! On balance it’s a deeply flawed picture, and rarely scary, but I like it anyway! I’m going to give Ghost Story two and a half skull flaps!
Posted by Burl at 14:48