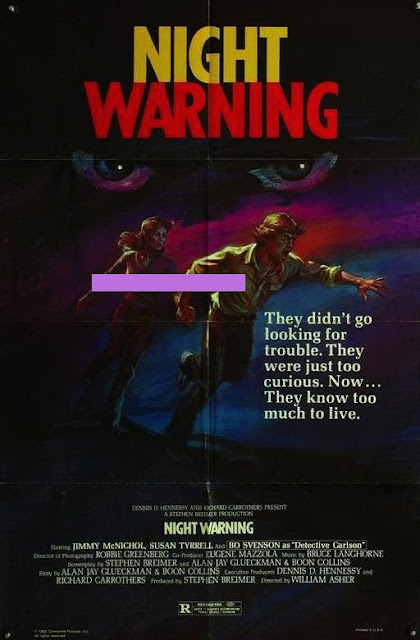 By Strindberg, it’s Burl! Yes, not only do I have another movie to talk about, but it’s another movie with bodies in the cellar! There are an awful lot of those, aren’t there, ha ha! This particular one is called Night Warning (it’s also known as Butcher, Baker, Nightmare Maker), and it’s a batty-dame extravaganza more along the line of Funeral Home than Whatever Happened to Baby Jane!
The whole thing begins with a couple driving off and leaving their little son with his aunt Cheryl! But before they get too far on their journey, the brakes fail, right there on a busy mountain road, and we get a fairly spectacular road accident featuring a truck crash, a messy decapitation and some impressive stunt work! Soon the boy has grown into Jimmy McNichol from Smokey Bites the Dust, and Aunt Cheryl has become a scenery-chewing madwoman! She’s played by Susan Tyrell from Motorama, Fat City and Tapeheads, and what a performance this is, ha ha!
Her relationship with Jimmy is, ha ha, highly unorthodox, and there’s no way she’s letting this strapping lad out of her crazylady’s grasp! Then one day a repairman happens by and Aunt Cheryl puts her moves on him, but he’s not buying, so Cheryl gives him a poking! Bo Svenson, from Snowbeast and Primal Rage, plays a cop so blinded by his homophobia that he can’t see straight, or mount an effective investigation! He’s convinced that Jimmy is gay and is moreover having an affair with his basketball coach, played by Steve Eastin from A Nightmare on Elm Street 2 and Gotcha!
Bill Paxton from Mortuary, Impulse and Weird Science pops up as another jerk that Jimmy has to deal with! And when Aunt Cheryl starts spiking his milk with relaxant, Jimmy’s world takes a turn for the even stranger! His girlfriend, played by the blonde lady from Newhart, does her best to help, but when Aunt Cheryl goes fully bats, there’s not much anyone can do! Ha ha, she gives the chop to most of the cast, and helps provide this strange slasher/drama hybrid the opportunity to showcase a few subtle Special Makeup Effects!
The picture was directed, weirdly, by William “Fireball 500” Asher, whose specialty was of course beach parties! There are no beach parties to be found here, but there is plenty of skeevy behavior, along with an admirable-for-the-time refusal to do gay caricaturing of any discernible kind! It’s got some dull patches, and some pretty humdrum performances, and Jimmy Mac’s character seems more than a little bit of a blockhead, but on the other hand it’s always nice to see a different approach to the slasher genre! There was a patch during which a dowdy neighbor-lady looked like becoming the hero of the piece that I was particularly pleased, but that section ended in a vicious poking, ha ha! I’m going to go ahead and give Night Warning one and a half missed free throws!
Posted by Burl at 14:00