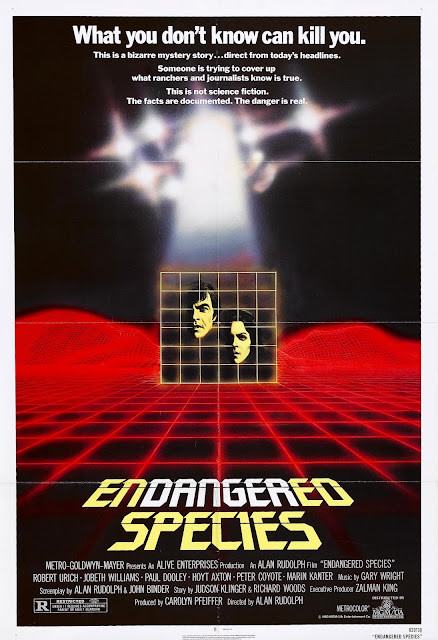 Alerting you from ranch country, it’s Burl, here with a review of that very oddball Alan Rudolph picture about cattle mutilations, Endangered Species! Now, Alan Rudolph, ha ha, there’s a director with a curious career! He’s a Robert Altman acolyte: this is well known, and pictures like Welcome to L.A., Choose Me, Trouble in Mind, The Moderns and Mrs. Parker and the Vicious Circle – the “real” Alan Rudolph movies – all attest to it! Then there are the director-for-hire movies he made, like Songwriter, Made in Heaven and Mortal Thoughts, the little romantic-comedy-genre movies like Love at Large and Afterglow; and he also has a number of genre pictures to his credit, like Barn of the Naked Dead, Premonition, and this one!
So I admire Rudolph for mostly doing what he wants, or else trying weird things that he must have known would be commercially dead in the water! It’s hard to know what attracted him to this story in particular, but it’s an interesting one because, despite the picture being a product of the Reagan era, it has a defiantly 70s sensibility: anti-authoritarianism (despite its cop heroes), paranoia, unconventional storytelling methods, a refusal to engage with thriller material in the expected fashion! All of this seems to me admirable, but nevertheless, ha ha, the movie doesn’t quite pull it off!
There are two stories happening in parallel through the first act! We have an abrasive, alcoholic New York cop played by Robert Urich from Turk 182, and his teenage daughter, decamping from the big city and heading west, their relationship a minefield of fractiousness and resentment! They’re pulling a big camper-trailer, but initial hopes that this will be a Winnebago Movie are soon dashed, as I don’t recall that we ever even see the thing’s interior!
Meanwhile, new sheriff JoBeth Williams, well-known from Poltergeist II, has her hands full with moocow mutilations! Her initial suspicion, that the dead beeves are the work of coyotes, is closer to the truth than she could possibly know, ha ha! Hoyt Axton, the great songwriter who was in Gremlins, plays a local big wheel who seems to know more than he’s telling! This is borne out when, later in the movie, he has a meeting with the big bad guy, a quasi military-man played by Peter Coyote, who has flown in by whispercopter, and still later when a fatal toothbrushing incident leads to Hoyt’s belly exploding in blood and sausages! Ha ha, graphic!
Paul Dooley from Last Rites appears as a small-town crusading newspaperman (one of my favourite archetypes, I must admit!), and the story also features Harry Carey Jr. from UFOria and Exorcist III as the local veterinarian whose nosebleeds are getting worse; Dan Hedaya from Commando and Wise Guys as the chief cowsnatcher, and Gaillard Sartain from All of Me as The Mayor! It’s a pretty solid cast! We even get the first-ever film appearance from Bill Mosely, whom we would later see in The Texas Chainsaw Massacre part 2, The Blob and The First Power!
All this bovine mystery and bellybusting is set to a musical score that sounds borrowed from a Don Dohler movie, and seems intent on lending the proceedings a cartoonish, B-movie aspect! Despite this, the revelations, when they come and such as they are, have a generally plausible feel! Scenes are short, almost to the point of feeling cut away from a little prematurely! On the other hand, Urich’s unpleasant personality, his alcoholism and his desultory romance with the sheriff are all dwelt upon a little too much!
So it’s a weird and flawed film, but I’m glad I gave it a look! It’s full of treats! For example, the actress who plays Urich’s daughter, despite being much too old for the part, holds an enormous appeal! She should have appeared in more movies if you ask me! Anyway, Endangered Species has been a movie I’ve long been curious about, and now that my curiosity has been satisfied, I give it two and a half cowcatching contraptions!
Posted by Burl at 13:22