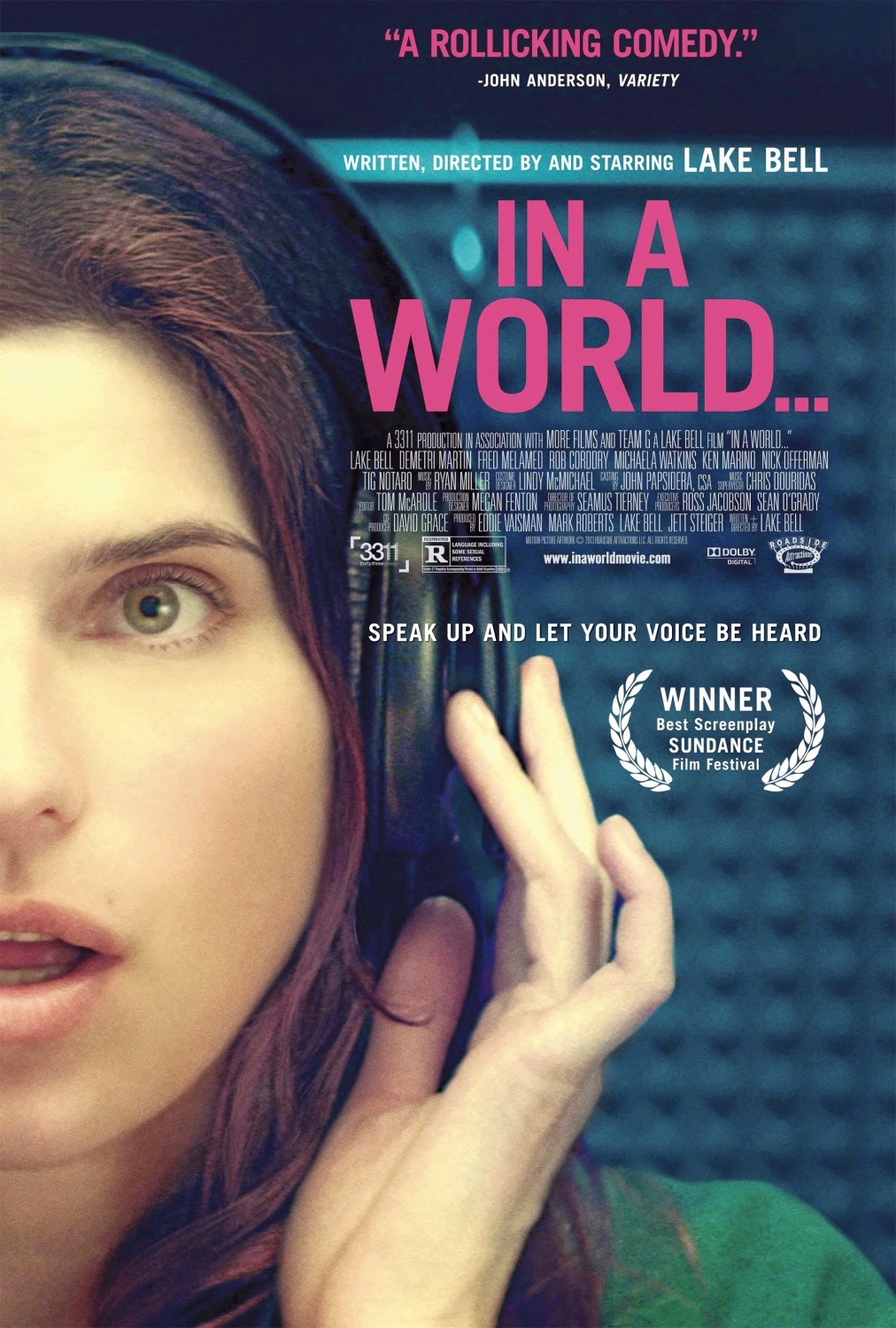 Ha ha, Burl here with a quick review of another of the quirky contemporary indie comedy-dramas I sometimes find myself watching! You know, like Jack Goes Boating or Our Idiot Brother! Usually some pleasures can be wrung from these pictures, though none of them ever become My New Favourite Movie or anything, ha ha! No, not even close!
I was interested in seeing this one, In A World…, because it appeared to take place within the tight universe of voiceover actors, and anytime a movie peers into some highly specialized society, ol’ Burl is interested! On that front In A World… does not disappoint! It instead provides all manner of anthropological detail about the inner workings of this community, of its rituals and its hierarchies and its desperate competitions!
The lead character, Carol, is played by a pretty lady called Lake Bell, who also wrote and directed the picture! Carol’s dad, Sam, is a monstrous egotist who happens to be one of the premier voiceover fellows in the business! Ha ha! Carol works with her voice too, but is limited in what she can do since the voiceover world is about the most male-dominated bastion outside the priesthood – and much less chaste, ha ha!
The plot is pretty loose, but it involves a search for a new voiceover person to narrate the trailer of a big new youth action picture! Don LaFontaine, the master of using the words “In a world…” to open his trailers, is dead, yet the producers (led by Geena Davis from Fletch in a cameo) want to use this opportunity to bring the phrase back! So it’s a big deal in the community, and both Sam and his protégé, the slimy Gustav, have reasonable expectations of snagging the job!
Meanwhile other things happen! There’s a subplot involving relationship troubles between Carol’s sister and her husband, who’s played by Rob Corddry from The Way Way Back! There’s a budding romance between Carol and a shellheaded comedian! And the picture spends a lot of (quite welcome) time documenting Carol’s eccentricities, and her habit of taping people with interesting voices! This habit proves useful in the later moments of the film!
It’s an interesting world, as I say, and there are appealing characters galore and plenty of funny moments; but like so many of these pictures, it ultimately comes off as just a slightly refined, mildly more hip version of a laugh-track sitcom from the 90s! I’m not sure what it is – I enjoy the films while they’re on, or at least I don’t mind watching them, but at the end I’m all “Hm! Ha ha!” They don’t linger in the memory the way many far worse movies often do!
Perhaps this is my problem and not the film’s, but, ha ha, this is my movie review, so it can go throw sticks! I hope that doesn’t sound mean! I want to be fair, and there was a lot I liked about the picture, after all! I think Lake Bell is talented and will probably make more movies, and in that she has my goodwill! Meanwhile, I give In A World… two tips, tips as in gratuities! Ha ha!
Posted by Burl at 21:57