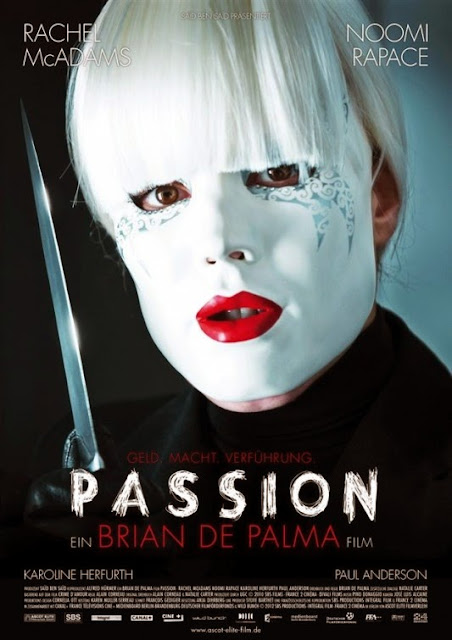 Burl saying hello! Ha ha, there seem to be plenty of people who hate Brian De Palma and his movies, and I suppose there might be people who are kind of hem-haw about them; and then there are people who really have a thing for the beardsman’s go-for-baroque style, ha ha! I’m one of these latter nutcases! By garr, I can say without hesitation that De Palma movies have given me a lot of enjoyment over the years!
Fond memories include hearing my father wax rhapsodic about Phantom of the Paradise, and being excused from chores because it was coming on afternoon television! Another time mother spoke in hushed tones about Dressed To Kill, a film she’d just returned from seeing with her girlfriends! Thus was bated the De Palma hook before I even knew the man’s name, or what a movie director did! Later I had marvelous theatrical experiences with The Untouchables, Mission Impossible, Raising Cain, Carlito’s Way and The Black Dahlia, among others! I saw Blow Out in a big old wonderful rep house, and that was a real treat!
Ah, De Palma! Well, though it may seem so, I’m not avoiding talking about Passion, the movie ostensibly under review here! Ha ha, of course there was no opportunity to see it in a theatre, but I’ll bet it might have played pretty well in one, with the right audience at least! The picture features Rachel McAdams, from Midnight in Paris and Sherlock Holmes: A Game of Shadows as Christine, a blonde executive at a Berlin ad agency! Ha ha, one day she’ll wear hamburger-sized crimson lipstick; on another she’ll dress like a diabolist! You just never know what stylecrime this wacky woman will pull next! Her underling is Isabelle, played by Noomi Rapace, from Prometheus and Sherlock Holmes: A Game of Shadows! A fellow who seems to have an erotic connection to both is Dirk, played by Paul Anderson from, yes, Sherlock Holmes: A Game of Shadows!
There’s workplace cutthroatery galore in the first half of the movie, and that sort of thing has never interested me much, so I was a little bored! But the movie, and the Pino Donaggio score, turn more recognizably De Palmian by the second hour, with some split screen, a murder, some dreams and a number of dumb plot turns! But recognizably DePalma doesn’t necessarily mean good DePalma, and I’m sad to say it’s not, really! There are moments, to be sure, but once you get to the very climax, with a suspense scene involving some pretty laughable cellphone technology and a police inspector clutching a bouquet of posy flowers, you have to say to yourself “Ha ha!”
After apparently casting his film simply by watching Sherlock Holmes: A Game of Shadows, De Palma demonstrates a general sort of laziness that pervades the whole picture! The climactic scene already mentioned feels as though DePalma thought to himself “Hmm, wonder what Hitch would have done if he’d lived in a world of portable data storage!” No one else has really wondered that, though of course modern technology (cell phones especially) have undercut so many traditional suspense devices that maybe it’s laudable for DePalma to have embraced it here!
All he’s really done is repurposed it though, and set it within a goofy plot involving ladies fighting ladies! But hey, it’s still the SubMaster at work, and there’s much to be said for that! I look forward to DePalma making more movies before he hangs it up for good, and I hope they’re wild and crazy thrillers like he’s always done! Meanwhile I should revisit some of his older works and review them for you here, and maybe finally catch up with Wise Guys, which, can you believe it, I’ve never even seen! Ha ha! Anyway, I give Passion one and a half ladykisses, which is only a fraction of the amount we get in the picture!
Posted by Burl at 20:54