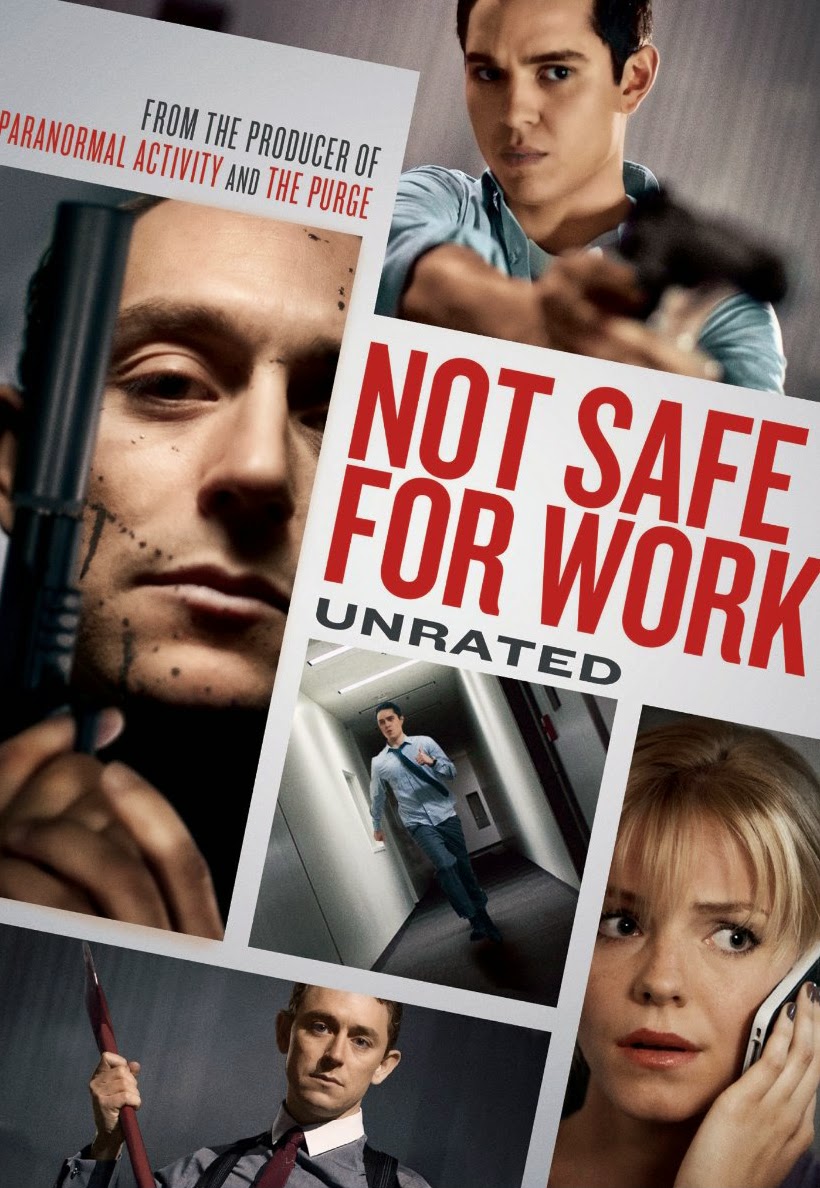 Well hello everybody – it’s Burl here! You know, sometimes I like to review silly little nonsensical movies I happen to have watched at random, and here I am doing it again with a picture called Not Safe For Work! It’s a little programmer that feels very much part of a tradition of small-scale B-movie programmers of years gone by! That’s a point in its favour as far as ol’ Burl is concerned, ha ha!
It comes to us from Joe Johnston, who made Honey, I Shrunk the Kids, The Rocketeer and, of course, Jurassic Park III! A little thriller like this seems somewhat outside his bailiwick, but defining the precise lineaments of Joe Johnston’s bailiwick is perhaps outside of mine! Ha ha! At any rate, it’s a little thriller about life in a law office, and if it does nothing else, the picture reinforces my strong desire to never work in a law office!
The movie opens with a pretty standard scene of workplace violence, which makes very little sense in the larger context, and retroactively seems to exist simply as a way to start the picture off with a few literal bangs! Then we move to the highrise law office and meet Tom, a paralegal, who is one of those characters meant to be at once smart and ambitious, but also a habitual screw-up! He’s on the boss’s radar anyway, which in this case is a bad thing, and the one-two combination of being late for work and attempting a ballsy maneuver that seemed like a good idea but turned out to be a rookie mistake, gets him canned by the slab-faced senior partner in his firm! (This fellow is ably played by Christian Clemonson from Black Widow, but probably would have been played by J.T. Walsh were he still with us!)
But there are strange things afoot: the big case which has all the office aflutter has attracted a well-dressed killer with a robotic demeanor to the workplace, and suspicious Tom decides to follow him back into the maze of cubicles and hallways, just to see what’s up! Ha ha, for a few moments it seems like one of the robots from Halloween III has blundered into another movie, but regrettably that’s not the case! Anyway, from then on it’s a cat-and-mouse situation with a few scenes of mild suspense, some off-rack cleverness and one or two bon mots!
It’s all delivered with competence and solid craftsmanship, but if this were a train instead of a movie, it would be the Nothing Special! Ha ha! The acting’s fine and the inevitable silly plot points are generally kept within acceptable boundaries; but the story is far simpler than the copious background of the Big Case on offer would suggest! (The credits sequence, for example, is one of those “presenting information through headlines” things that, ha ha, seriously people, simply have to stop happening!) There are also a few dropped threads that, while ongoing, seem to hint at a picture with more on its mind than is actually the case!
Like Passion, this is an attempt at classic Hitchcockiana that embraces modern technology to an overweening and silly degree! Phones and computers are everywhere, but they all seem to work by slightly different rules than those we’re used to here in the real world! Oh well, that’s forgivable I suppose, but it does put the picture into a microgenre that it, and probably most such movies, would rather not be thought a part of!
It’s a fleecy of a movie that falls apart towards the end, and makes little to no impact while it’s on! The idea that large drug corporations are viciously unscrupulous is a solid point, if not exactly breaking news; everything else, from the title on down, is nonsense! I give Not Safe For Work one and a half fucking iPhones!
Posted by Burl at 22:57