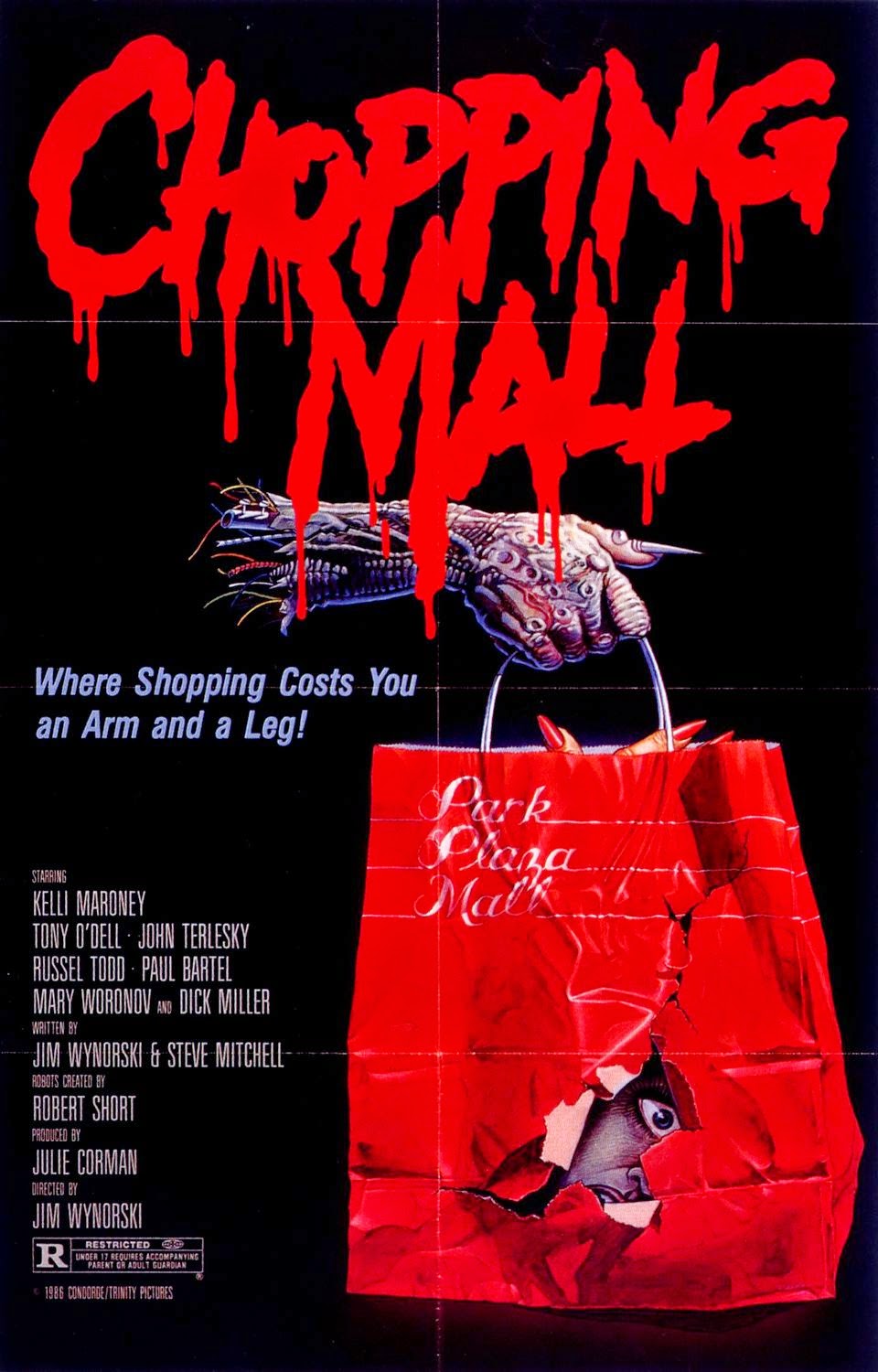 Bleep boop, it’s Burl, here to review a robot picture for you! Ha ha, it’s called Chopping Mall, and it’s a picture I’ve always remembered fondly, both because it stood out from the slasher movie pack by virtue of its mechanical antagonists, and because it features a nice little cameo from none other than the great Dick “Apache Woman” Miller!
Watching it again, I can see that, while Miller is as entrancing as ever, the picture is really not very good! Still, it has its pleasures, as we will see! Now, as the title implies, the movie is set in a mall, which places it in the Retail Horror microgenre with pictures like The Initiation and Hide and Go Shriek! The mall (the same one from Commando, ha ha) has security doors like the ones on the Death Star, and a trio of security robots which have somehow become homicidal because of lightning strikes!
And this is the very night that four couples – adults mind you, and not teens – decide to spend the night partying in the department store! Why do they pick the department store to party in? Don’t they have homes in which they could party? It seems a very strange decision, ha ha! Nevertheless, among the ad-hoc impedimenta which make up what looks more like a jumble sale than a furniture store, three of the couples set to work on the beds, while only a few feet away the fourth couple settles in to watch Attack of the Crab Monsters! Ha ha! Meanwhile, the robots have begun their marauding, taking out first the security staff (one of whom is played by Gerrit Graham, an actor we know from pictures like Class Reunion and The Annihilators), then angry janitor Walter Paisley, played by who else but Dick Miller, and working with the dirtiest mopwater ever seen on film!
Soon the younger actors become the targets of robo-rage! Thankfully the constant gum-chewing of John “Secret Admirer” Terlesky is put to a halt by a clanking claw! His false-busted ladyfriend comes next, the victim of a not-bad headsplosion! Then it’s run, chase, zap and rat-tat-tat-tat! Lovely Barbara Crampton, familiar to us from Re-Animator and Fraternity Vacation, is forced by the terrible, derivative script to become irrational and hysterical, and for her trouble is burned to cinders! The hero of the piece is Kelly Maroney, who uses the knowledge of the mall’s layout she gained from appearing in Fast Times at Ridgemont High to outwit the last of the killbots and blast it to flinders! Ha ha, this is after an elevator and a golf cart piloted by Russell Todd from Friday the 13th part 2 help dispatch the others!
So there are robots and boobs and youngsters running around getting their heads zapped off, but, too, there are cameos! Plenty of Roger Corman alumni make appearances here: Miller of course and Graham, but also Paul “Get Crazy” Bartel and Mary Woronov from Looney Tunes: Back In Action appear as their apparently beloved characters the Blands, which I appreciated even though I’ve never seen Eating Raoul! None other than Mel Welles from Smokey Bites the Dust is on hand as a hideously filthy cook, and Angus Scrimm from Phantasm II appears very briefly as Man Standing Up And Asking A Question!
All of these people and the elements earlier listed, along with a puffpastry of a running time (77 minutes), make a viewing of the picture worth it! But be warned: the script is pretty bad, and the movie happily, but a bit wearyingly, imitative of other things! It has a pretty nice 80s horror look, courtesy of cinematographer Tom “The Malibu Bikini Shop” Richmond, and the acting is mostly not too bad, and it’s generally efficient; but it’s never scary or suspenseful or impactful in any way! Sometimes it’s a little bit funny, but that’s about it! My fondness for it was tested in this most recent viewing!
With all of this said, I’m going to give Chopping Mall one and a half deadly pincings!
Posted by Burl at 23:42