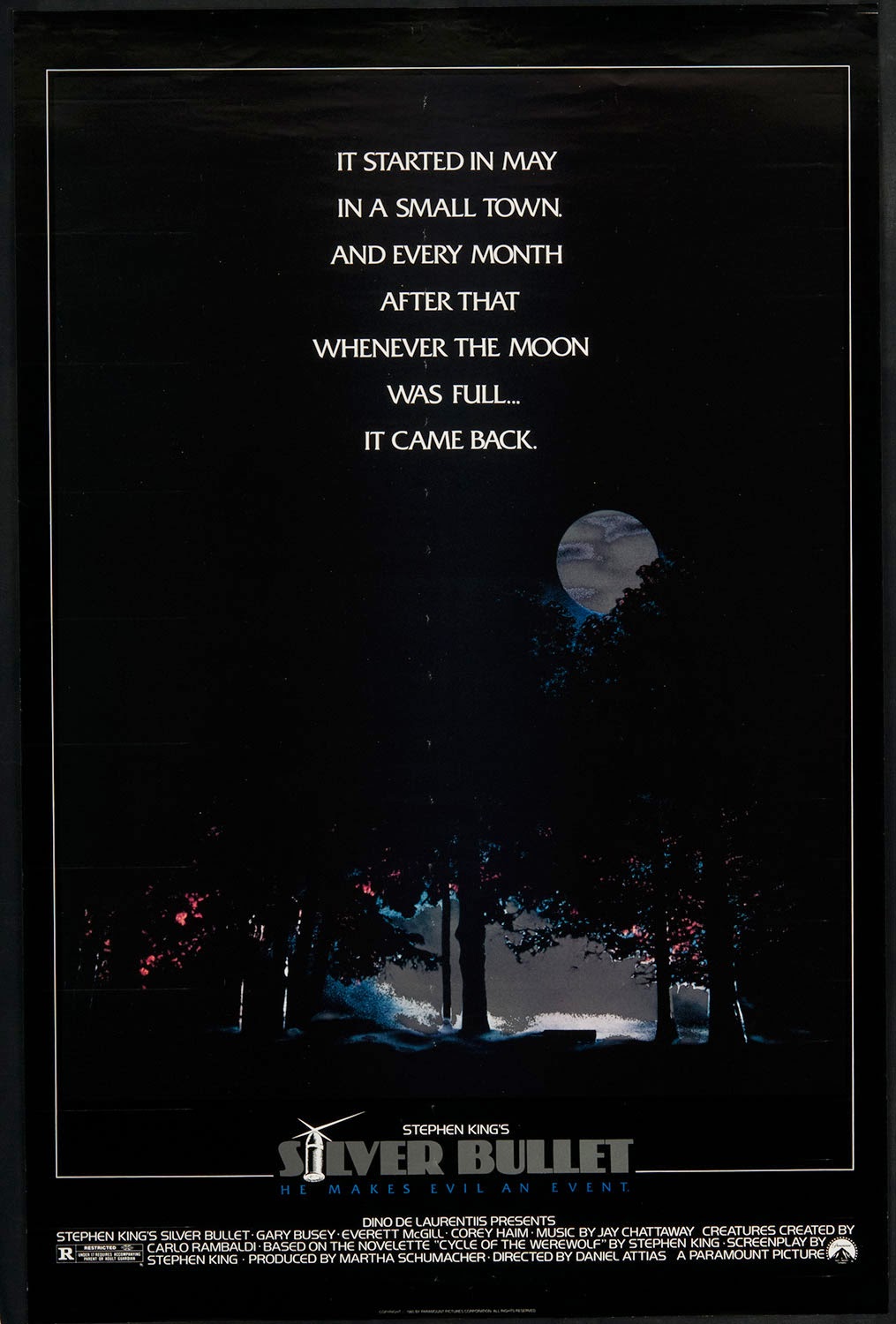 Aroooo, it’s Burl with another werewolf picture for you! This one’s not quite up to the standard set by An American Werewolf in London, but it’s no Howling II either, ha ha!
In fact, it’s Silver Bullet, a movie I’ve been a little fond of, but not very fond of really, for years, ever since I saw it in the theater as a young lad! It is of course a Stephen King picture, made around the same time as, and with much the same crew as, Maximum Overdrive! Except that King didn’t direct this one – it was directed by a guy with a fairly TV style, who, immediately after this picture, went into TV directing and never came back!
For some reason the picture is set in the mid-70s, in Tarker's Mills, which I suppose must be one of those little Maine towns so dear to the author! James Gammon, the hard-assed coach from The Pom Pom Girls, appears as a comic drunk who gets his melon removed with one swipe of a paw that might have been borrowed from Grizzly! “Ha ha, thus was the beginning of our little town’s long nightmare,” intones posh-sounding lady narrator Tovah “Brewster’s Millions” Feldshuh!
Then we meet little wheelchair-bound Marty, played by Corey “Watchers” Haim, and his sister Megan Follows, who have a thorny relationship! The murders continue on a menstrual cycle, and pretty soon boozy old Uncle Red, which is to say Gary “Eye of the Tiger” Busey, gets involved! Uncle Red is the sort of fellow who’ll sit around telling obnoxious jokes and swigging from a bottle of Wild Turkey on the one hand, and construct fabulously unlikely mechanized conveyances for his disabled nephew on the other!
But who is the townsperson with the hirsute double life? Ha ha, could it be Uncle Red, who, we are told, visits Tarker's Mills on a monthly basis? Could it be mom or dad, or the touque-wearing bartender played by Lawrence “Tough Guys Don’t Dance” Tierney? Or the gas station guy who looks halfway like a werewolf already? Or could it be Reverend ‘Bout Town, the district’s brooding holy man, played by Everett McGill from Dune? Well, it’s one of them, that’s for sure! The kids’ suspicions settle on Reverend ‘Bout Town, and with Uncle Red’s help they decide to set a werewolf trap!
It’s a watchable enough picture, though not a very scary one! King’s script is full of his grotesque small-town caricatures and clunky dialogue! “Ha ha, you gonna make lemonade in your pants?” demands one character of another! But occasionally the dialogue works: “Ha ha, I’m too old to play The Hardy Boys Meet Reverend Werewolf,” grouses Uncle Red! But for all its faults – including, but not limited to, a baggy structure, unconvincing nighttime cinematography, a general silliness – the worst of them all is the rubbery werewolves themselves, which look a little like the one in WolfCop crossed with a honey bear!
Altogether the picture could use a bit more pep – there’s some gore and some suspense, but a certain liveliness is sadly absent! It still occupies a place in my heart, but I’m going to give Silver Bullet one and a half de-occulations by bottle rocket!
Posted by Burl at 08:38