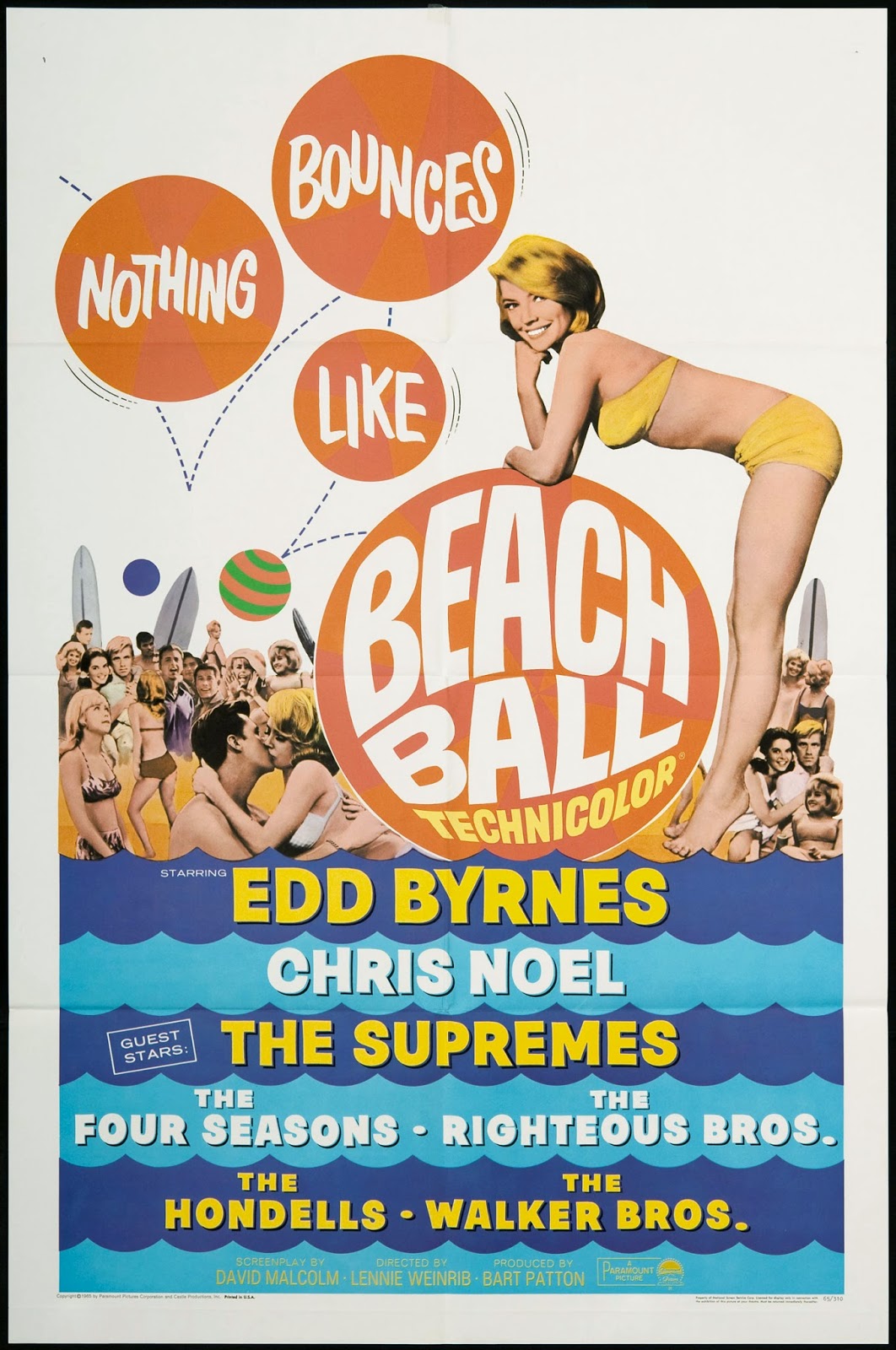 Ha ha, hepcats, it’s Burl, here to boogie with you on the beach again! Yes, I can’t seem to help visiting the beach on a pretty regular basis, at least cinematically, ha ha! Because here I am to chat about Beach Ball, another of the non-A.I.P. sun ‘n’ surf-stravaganzas! In fact it shares much with The Girls on the Beach, and would make such an ideal companion piece with the picture that if you double-billed them, you’d have trouble remembering which was which only a few hours later!
Just like GotB, we have a group of fellows and a group of ladies (faux-nerds this time, ha ha), and with the beach (and sundry other locations) as a backdrop, the picture chronicles their inevitable coming together! It seems we have a battle of the bands, and our boys are a group called, ha ha, The Wigglers! There are three Wigglers and their manager, the kooky and superannuated Edd Byrnes! Two of the Wigglers are handsome guys: Bango the drummer is played by Robert Logan, well known from Born to Race, Scorpion and Snowbeast, and Jack the guitar player is played by Aron “Cannonball” Kincade! There’s a sax player in this trio too, the goofy one of the group, and he’s played by none other than Don Edmonds, who also appeared in Home Sweet Home and Wild, Wild Winter, but happens to be the director of Ilsa, She-Wolf of the SS too! Ha ha, what a strange career he had!
The girls, meanwhile, are so close to the ones from GotB that I suspect it might actually be the same quartet, ha ha! The plot is all the kids getting together to help the Wigglers keep their instruments from being repossessed by the persistent Mr. Wolf, so that they can play in the big Best Band Contest! Lots of terrific performances pop up at the flimsiest excuse, from people like The Righteous Brothers (whose hits I’ve never liked, but I liked the band here!), The Four Seasons, The Hondells and the terrific Walker Brothers! And of course the grand climax to the music is The Supremes, featuring a truly amazing hairdo on Diana Ross! Of course, ha ha, somehow The Wigglers come out on top of them all in the contest!
The running gag involving Mr. Wolf is that he keeps getting caught up in all the fun fun fun, or else is dosed with nitrous oxide, and always ends up in some mildly compromising position in the morning, being frowned at by cops! The cops in this case are one guy I didn’t recognize, and the great Dick “Smokey Bites the Dust” Miller! Ha ha, he’s as terrific as ever here, taking it smooth and easy and grinning as if stoned!
After a great scene where a beatnik mechanic turns the boys’ car into a spacemobile, there’s a speed chase! Then come endless scenes of farce, filmed on the sly at a car show, and then, as in GotB, the lads end up dressed as ladies! It’s a silly picture, but it has many, many scenes of pretty ladies shaking their bottoms to the beat, and lots of fine music, and many activities (car racing, skydiving, skindiving, and even a little surfing, ha ha!); and of course it has Dick Miller, which automatically makes it a must see! I’m going to go ahead and give Beach Ball two and a half wigglers!
Posted by Burl at 22:04