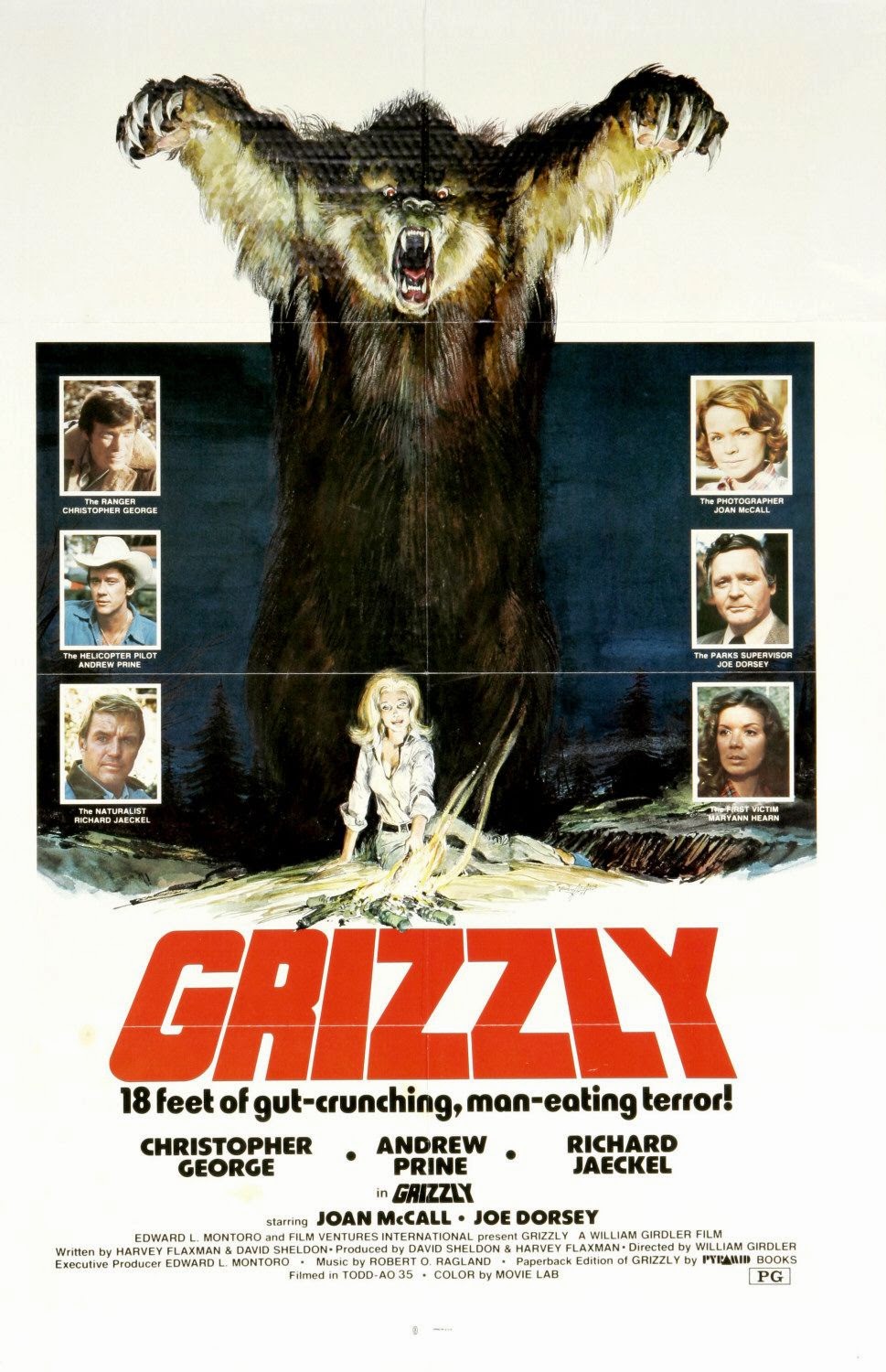 Grawww, it’s Burl! Ha ha, hope I didn’t scare you there – I was just doing my famous bear growl in honour of the movie I’m reviewing for you today, Grizzly! This was one of the very first Jaws rip-offs to appear in cinemas (it predated Attack of the Killer Squirrel by many years, at least) and the most cheerfully shameless of them all – Great White and Jaws 2 included! Ha ha, I’d have loved to see it in the drive-in, which is where, with every silver halide grain of its being, this picture was meant to be viewed!
Like Jaws (a phrase you’ll be reading plenty through this review), the movie concerns an unusually large predator moving through a tourist-heavy area in search of, or at least happy to find, human meat! The threat here is of course ursine rather than carcharadonic; and, though the movie was filmed in Georgia by the late William “The Manitou” Girdler, it’s supposed (I think) to take place in Yellowstone Park instead of Martha's Vinyard! Anyway, the mountains aren’t quite so tall as they should be if so, but certainly it’s implied that this is a particularly vast national park!
The grizzle-bear, which never seems as large as everyone says it is, roams the woods and sends limbs flying with every dubbed roar and swipe of its fur-coat paw! It seems to have a preference for ladies – and buxom twentysomething ladies, in this picture, possess as a cohort a mania for off-season camping that I’ve never seen manifest in real life! Ha ha!
A motley team of three men band together to hunt the grizz, of course! There’s Kelly, the always-grinning Mr. Ranger of the park, played by Christopher George from Mortuary and City of the Living Dead; the Mark Trail-ish Scott, as essayed by Richard Jaeckel from The Dark and Herbie Goes Bananas; and Don, a laconic helicopter pilot played by Andrew Prine from The Evil and Simon, King of the Witches, who apparently once survived a mass grizzly attack on his native village despite not being aboriginal at all! Ha ha!
At least one of these fellows won’t make it of course, but not before Don sets his jaw grimly and delivers his grizzly bear village massacre story! The bear itself, a heavy brown number, delivers his killer hugs with abandon! Finally, after a massive helicopter hunt, the big artillery is hauled out and Commando-style bazooka tactics employed!
Ha ha, even though he clearly must be killed, you feel kind of bad for the bruin! He does cause some damage, I will admit, and the aforementioned limbs and plenty of gouting blood must have pushed the boundaries of the PG rating! (As did Jaws!) But that was the 70s for you, and this is most definitely a movie of the 70s! Ha ha, like wines that only reveal their full spectrum of subtle aromas after time has passed, so many of these pictures (Bug, The Car, The Sentinel, the aforementioned Manitou) seem almost to enjoy the simple fact of their vintage, almost to revel in it!
The tough guy acting is pretty good all around, and other familiar faces, like Joe Dorsey from Club Paradise and the mysterious Kermit Echols, spice the concoction still further! Ha ha! There’s what usually gets called “attractive location photography” too, and an alarmist score that gets kind of jazzy when the mood strikes it! All of these things are credits!
The purloined story you might think would be a debit, but it doesn’t rest completely in that column; nor really in any column! It’s just there! It’s got a reasonable amount of pep and lots of bicentennial flavor, and my natural instincts tell me to give Grizzly two and a half legendary-but-almost-certainly-not-worth-tracking-down sequels!
Posted by Burl at 23:50