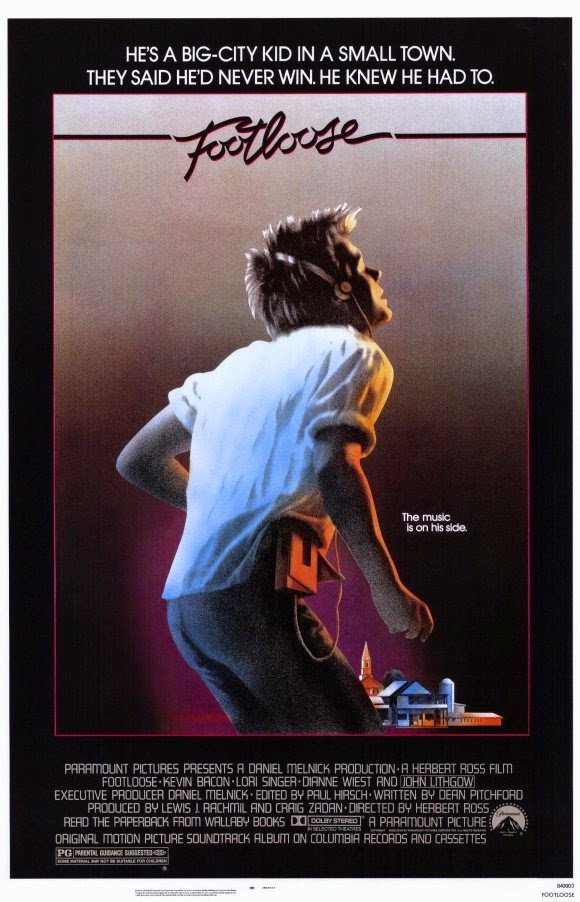 Ha ha, it’s Burl here, cutting loose, foot loose! Yes, today I’m reviewing a picture called Footloose, which is a movie I’d never seen before just the other day! It’s strange how many of these iconic 80s pictures I’ve never seen, considering how many 80s movies I have seen! Ha ha! But no, never seen Top Gun, never seen Dirty Dancing, never seen Risky Business or Bull Durham or Three Men and a Baby, never seen Six Pack or Stroker Ace or Yes, Giorgio!
But now I can hold my head up high and say to the world that I’ve seen Footloose! Ha ha, finally I am cut loose from that ash-grey pit where dwell those slumped and lumpen creatures who’ve yet to taste its charms, and like the characters in the movie, I now can dance like a man who carries a small portable trampoline with me everywhere I go!
Still, when I watched the picture I felt like I’d seen it before, because the story is so basic and so clearly told here in that 80s Paramount Pictures high-concept style! We all know the situation: big-city boy Ren comes for some reason to live in a little Utah town where they banned dancing after a local tragedy five years earlier! The local kids are so bored they spend their time doing death-defying stunts, and Ren must figure out a way to get their feet tapping again! (Little do we suspect that they’re all actually professional dancers, as the climactic hoedown reveals!)
So like Mickey Rooney and others before them, it is thereby resolved to put on the big event in a local barn! Of course The Reverend gives them a lot of static, but less than I was expecting! Ha ha, he turns out to be a decent guy, as shown in a weird, out-of-nowhere book burning scene, and at the end where he give his tacit consent to the dance!
Naturally Kevin Bacon, a familiar face from Friday the 13th, essays the role of the bristle-hair from the city, who drives a foreign car and knots his tie loosely like Sammy Davis used to! The Reverend’s daughter, who he falls for, is played by Lori Singer from Summer Heat; an actress I’ll always think of in connection with a story where she wouldn’t wear old-age prosthetics in Warlock, when she was supposed to have been struck with a curse of fast-aging, so they had to draw an old lady face over hers with grease pencils!
John Lithgow from The Big Fix plays the Reverend, and it’s funny to think that he did it the same year he played Lord John Whorfin! Actually there’s some Whorfin to the Reverend’s fire-and-brimstone sermons, ha ha! And his wife is none other than Dianne Weist, whose turn it wasn’t quite yet back when she did It’s My Turn; and Chris ”The Wild Life” Penn is very good as Willard, the amiable cowboy who befriends Ren in a genuinely charming scene!
You can tell that I think the cast is the most interesting aspect of the film! The rest isn’t bad—a little dumb, and though the songs are well-loved, I could conceive of a different, better soundtrack! But enough Monday morning quarterbacking! Footloose is classic 80s machine-tooled entertainment, and though I’m not in any hurry to see the remake, I can’t help but wonder how they updated it, or whether it needed updating at all! Ha ha, I give Footloose two handfuls of glitter!
Posted by Burl at 00:25