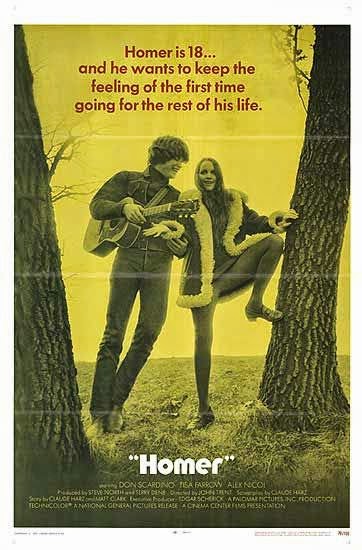 Ha ha, it’s time to think about a real Canuck obscurity, Homer! Never heard of Homer? Neither had I! But it seemed to be in the same category as the very enjoyable Rip-Off, and it even had the same actor, Don “Squirm” Scardino!
Initially it is very similar to Rip-Off, appearing to be a precursor to the “losin’ it” subset of the teen sex comedy genre just as much as Rip-Off foreshadows a different kind of teen sex comedy, the “four guys” template! And Homer himself, and the actor who plays him, very much anticipate the ginger heroes we find as essayed by Glenn Morshower in Drive-In, Stuart Goetz in The Van, Dennis Bowen in Van Nuys Blvd. and Gary Hershberger in Paradise Motel! Not to mention Ron Howard in American Graffiti, which this picture also predates!
The movie is indeed very Canadian, but it’s set in Wisconsin so that the Vietnam War can intrude on the narrative! For a long time it does not, and we get to know young Homer, who is trying to escape the town by hitchhiking out of it, guitar in hand! But the only ride he gets is from Bob “Starship Invasions” Warner, playing the fed-up town sheriff, who takes Homer straight back home! Along the way the young lad plays and warbles one of his original compositions, a faux-Dylan tune about shellacking hair!
Homer’s farmer dad is not very happy about this, but then farmer dad is not happy about much! He sure does hate Homer’s music, both the stuff he likes to listen to and the tunes he composes and sings! Homer hangs out with his buddies, particularly one who’s a soldier, and who’s just returned on a furlough before off heading to ‘Nam! Our redheaded hero also spends some quality time with his quasi-girlfriend, played by Mia Farrow’s sister Tisa “Zombie” Farrow! He treats her pretty shabbily I’m sorry to say!
Tensions between Homer and his farmer dad continue to ratchet up, and the relationship hits a new low when a drunken Homer crashes the family car! Homer’s stuff is taken away from him, and there’s a long montage showing him working hard on the farm! Within that, there’s an interval showing the farmer dad fixing up the motorbike Homer’s buddy left behind, and then riding it joyfully through the fields! He and his son seem to have reconciled!
But this détente is merely temporary! Homer’s buddy comes back from Vietnam in a box, and a devastated Homer takes it on himself to demonstrate against the war on the main street of the town, playing protest songs and chaining himself to the local statuary! Farmer dad is enraged and humiliated and puts a bit of a slapping on Homer! Things come to a head the next morning when Homer plays some Zeppelin at high volume, and then farmer dad angrily stomps his stereo into flinders! Homer has finally had enough, and we last see him hitching once again, this time getting a ride from a hippie van! Ha ha, it could be a smooth segue into the beginning of Loving & Laughing!
If you’re in the mood for it, Homer is a pretty good slice of faux-Americana, and it has a rock n’ roll soundtrack I'd have thought way beyond the resources of such a low-budget movie! We get the Zep already mentioned, and the Byrds, Buffalo Springfield, Cream, the Lovin' Spoonful, so forth! Scardino’s own songs are salted in there too, and some of them are okay! I particularly liked his opening tune, and sure would like to have a copy of it! I wonder if it ever got released as a single or anything!
Other virtues include several of the performances – Scardino is fine, and his farmer dad, played by Alex “Bloody Mama” Nicol, is really good - and the realistically shifting relationships between the characters! The photography is attractively pastoral, which is another big plus! It’s a trifle, but I both enjoyed it and respected its historical importance! I’d happily recommend Homer, and I give this picture two and a half unexpected sleepovers!
Posted by Burl at 00:07