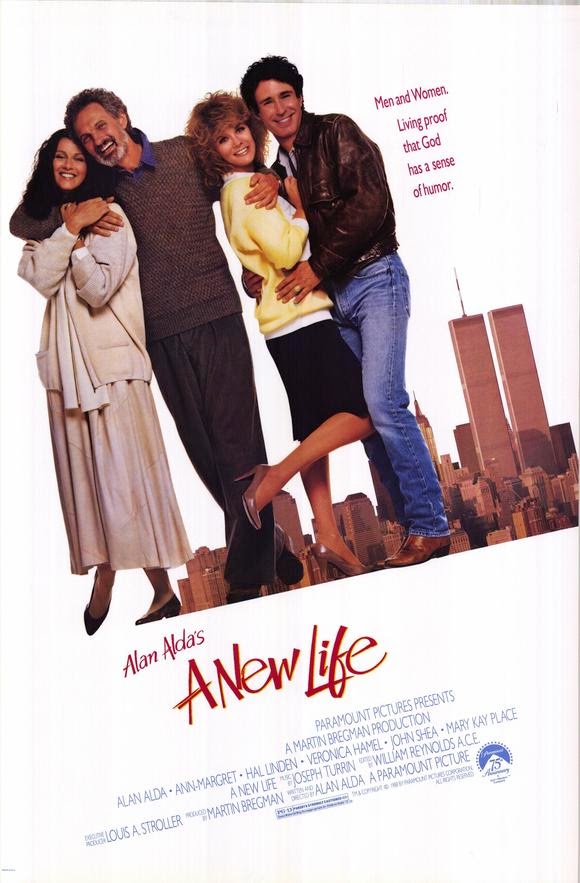 I say, ha ha! It’s Burl, and I’m here to review a picture about a real New York divorce! Ha ha, no, I’m not talking about Husbands & Wives, though I sort of wish I was! (Hey, ha ha, the style seemed pretty novel at the time, and Woody was all over the news!) Anyway, this is a picture by sometime Woody cohort Alan Alda, and I watched it recently precisely because it appeared by every indication to be the least interesting movie ever made!
Turns out I wasn’t far wrong! But I kept watching right to the end, because this was an after-the-fact example of a genre that fascinates me: the late 70s-early 80s adult comedy-drama! It’s My Turn and The Last Married Couple in America are both paragons of the form, and Alda’s first feature as a writer-director, The Four Seasons, is practically the epitome! So I stuck with A New Life, because it seemed like an extension of the same movie a decade on!
It begins as Alda is resentfully agreeing to a divorce from his wife, Ann-Margret, whom we know from Grumpy Old Men of course! Alda’s a shouty, type-A sort of fellow (he’s a Wall Street trader and wears a lab coat to work for some reason), and is resolutely old-fashioned in his understanding of the world! He seems to have almost pathologically ignored his wife through their marriage! His best buddy, meanwhile, on and off the trading room floor, is Barney Miller himself, Hal Linden, playing a chauvinistic silver fox!
So Alda and Linden hit the scene! Alda colours his beard and hair and purchases an all-new lifestyle suit! Ha ha, he looks as ridiculous as you can imagine! Thankfully a transgendered person robs him of these garments at the first opportunity! After a while he meets a lady doctor (Veronica “Cannonball” Hamel) whose mere touch makes his heart race, and from then on he’s in hot pursuit! Meanwhile Ann-Margaret meets a dashing but weird young sculptor (whose movie art was bland but not egregiously bad for once) played by John “Windy City” Shea!
Of course there are troubles! Shea turns out to be exactly as weird as he first appears, and Alda turns cartoonishly squeamish when Hamel becomes pregnant and he has to do gross things like be in the room while she’s having an ultrasound! Ha ha, I suppose the joke is that he’s such a nance after so many years of playing a doctor and doing meatball surgery (ha ha, yum yum!), but the squeamishness is so extreme and pathetic as to be unbelievable!
It’s all very bland and TV-like, thanks to the TV cast and the colourless directorial stylings of Alda! I recall his earlier movies (The Four Seasons and Sweet Liberty) as at least seeming like movies, but it’s been a while and I could be wrong! The picture at least comes to a relatively sweet and true-to-life close, with Ann-Margaret zooming around on her scooter, free, free, free! and Alda pushing a baby carriage around the park! Largely, however, it was as smooth and unexciting as I’d assumed it would be all these years, and I can’t recommend it with very much enthusiasm, or at all, really! Ha ha! I give A New Life one use of the F word as granted by a PG-13 rating!
Posted by Burl at 10:36