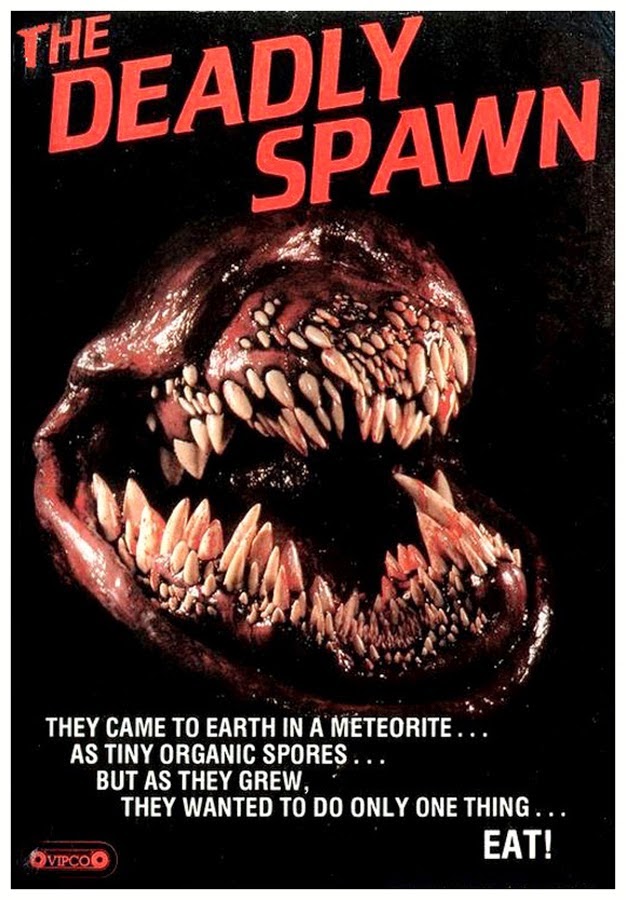 Ha ha, Burl here to discourse on 80s horror movies! We all know that the best of them, best of the low-budget ones anyway, have a few particular things in common things which mark them as the cream of the crop, the purest expressions of 1980s B horror! The low-end line for this genre seems to lie between Don “Fiend” Dohler and Bill “Invasion From Inner Earth” Rebane, with those pictures lying on and below the Rebane side of the line being exceptionally regional and cheap! The upper regions wouldn’t extend much above The Power, stuff like that!
One key ingredient to these movies is the welter of blood that splashes against a wall, or better yet a bare lightbulb! Here I’m talking about The Evil Dead, Basket Case, maybe even Night Beast, probably Night of the Demon, and certainly the picture I’m talking about today, The Deadly Spawn! Ha ha, you’ll find no end of pleasures in this fine motion picture if you’re already a fan of this sort of thing, though if you’re a fan of this sort of thing, you’ll no doubt already have seen it!
But maybe, as was the case for me, it’s been a while! When I first saw this picture I wasn’t much older than the young monster-kid protagonist, and though I could not have matched his devotion to the cause, nor Cory’s in Friday the 13th part 4 (after all I never made masks, or even painted figures), I was fairly enraptured with this highly sympathetic portrayal of One Of Us!
The picture opens on a rainy day in New Jersey, the morning after the arrival of a mysterious meteor! Oh no, the basement is filled with spawn! One by one, the people of the house descend into the depths of the watery cellar, only to have their faces rasped off by the prolapsed gullet of the spawn! Ha ha, the spawn move about on sausage legs or slither through the watery basement, devouring householders and tradespeople alike! They move upstairs, eating out the eyes of an unctuous uncle in an obvious tribute to The Birds, and, in a nearby house, disrupt a ladies’ luncheon! Watch for the intrepid old lady, the one who made the ratatouille, as she battles the verminous aliens with a ferocity matching that of Ripley from Aliens! I became very fond of that old lady, and she really represents the strongest claim The Deadly Spawn has on a similarity to any of the films in that blockbuster Twentieth Century Fox series!
There are some teenage characters, but they don’t accomplish much aside from becoming victims! Ha ha, one luckless lady, despite her creditable impersonation of a final girl, catches a combination decapitation and defenestration at the pin-hands of the spawn! Another guy, a real Jersey Joey-Jo-Jo, is driven nearly insensible by the spawn, which his brain refuses to accept! And of course it all ends with a giant spawn rearing up like a lost sandworm from Dune, roaring his pleasure at earthly conquest!
There’s entirely too much standing around in basements, and the kid hangs out down there approximately three million times longer than any other human being would, but the movie still keeps its Garden State snare in you all the way through! The monsters are simply delightful, and there’s enough gore for any taste! There’s even some unlikely and awkward semi-nudity! Yes, this movie delivers the goods!
I’ve still got a real soft spot for it and probably always will! A great watch on a dour and inclement day, just to see some people having a worse time of it than you! Ha ha, I give The Deadly Spawn three breakfast table issues of Famous Monsters!
Posted by Burl at 14:01