Burl reviews Allan Quatermain and the Lost City of Gold! (1986) 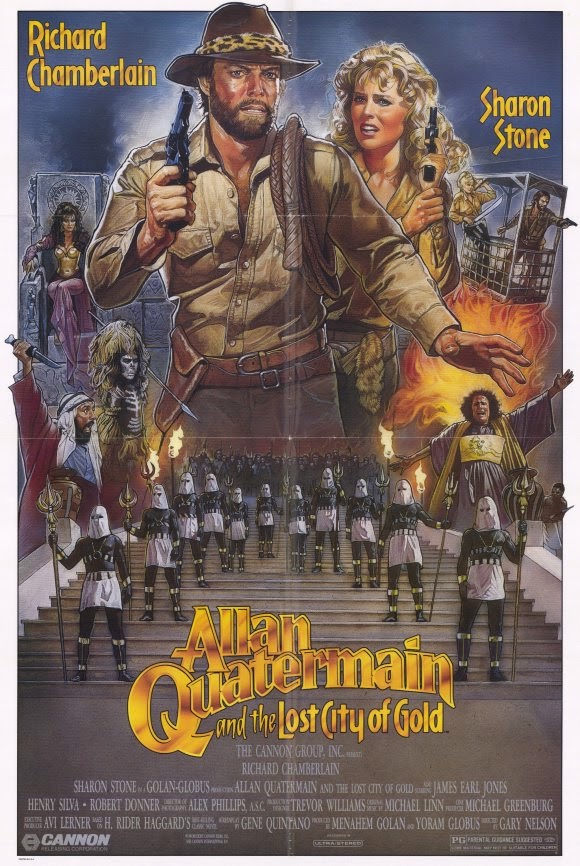 Ha ha, hello adventure seekers – Burl here to review one of the very, very many Raiders of the Lost Ark rip-offs of the 80s! Cannon Films alone made several, and ha ha, this sure is one of them!
I’ve never waxed enthusiastic about Cannon movies here, because there’s plenty of that around the internet! I like them as much as anyone and more than most, I’d say, but the G&G boys did seem to be in possession of some kind of Cannonization machine through which they put all their movies for extra seasoning before release, just to give it that Cannon Films flavour!
And this one, Allan Quatermain and the Lost City of Gold, has it in spades, ha ha! This was the second Quatermain picture they did, and like everyone else, I’m not convinced they chose the right actor in Richard “Bells” Chamberlain! He’s not a bad actor or anything, and he’s perfectly macho enough; it’s just that he doesn’t seem like someone who would prefer to live in rural Africa to, say, Los Angeles!
The picture begins with a whole bunch of business about a suit, which Quatermain doesn’t wish to don, but which his ladyfriend, played by Sharon “Total Recall” Stone, insists upon! Then a fellow stumbles in from the jungle and ignites a mystery, which leads the pair on an odyssey into the darkest heart of the continent in search of a lost city, where Quatermain’s brother may dwell!
Their party includes James Earl Jones from The Hunt for Red October as a nuance-free axe warrior, and Robert “Damnation Alley” Donner as an irritating swami! There are also some native bearers, but in the grand Eurocentric tradition of these things, they are given no names, no characterizations, no dialogue save “Aiiii” when they perish, and no hint of eulogy afterward! The trek takes them through some Raiders-like booby-trap perils and corpses who were the victims of same; through the territory of an aggressive canoe-based tribe; into battle with crazy cave snakes; down whirlpools and through a superheated subterranean river, and almost into a pillar of flame!
All of this sounds exciting, and though it’s actually not, it does provide some low-level cheeseball pulp enjoyment! Even this comes to a halt, however, when they reach the lost city of gold! It’s populated by toga-wearing wimps (it’s a lost white tribe, you see), ruled by Henry “Alligator” Silva in a fright wig, and features Elvira in a supporting role as an evil mute lady! By the time Quatermain somehow drums up some St. Elmo’s Fire or something, and manages to melt some gold onto Henry Silva, the very mild pulp pleasure has returned, but it’s way too little, much too late!
It’s a really terrible picture, never exciting, and only sporadically offering the 80s flavor that would be virtually the only reason someone might watch it nowadays! I haven’t seen the other Cannon PG adventure films – the other Quatermain picture, King Solomon’s Mines, or Firewalker, or others of that ilk – and though I still may do someday, I’m not going to be in any great hurry about it! For now I’m simply going to give Allan Quatermain and the Lost City of Gold one single exploding bench!
Posted by Burl at 10:55